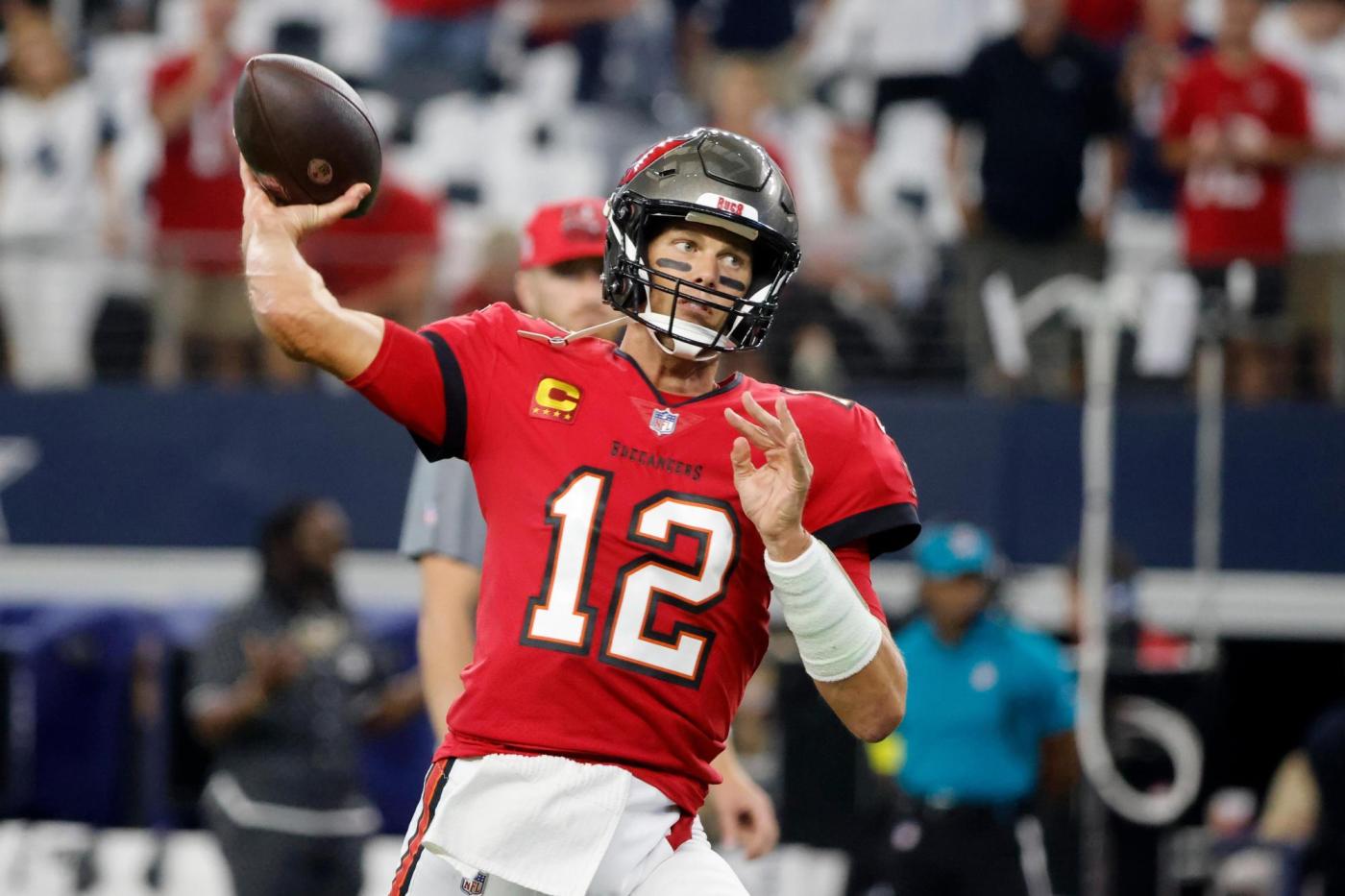 Cowboys owner Jerry Jones said after the game that Prescott needs surgery on his throwing hand and will miss multiple weeks, a season-altering blow to a team that won the NFC East last year.

A rough night for Prescott got worse after his right hand struck a defender when throwing a pass in the fourth quarter. He was checked on the sideline before jogging to the locker room.

Brady was in control throughout the first start for a 45-year-old quarterback in NFL history. The seven-time Super Bowl champ got a big assist from the defense in Todd Bowles’ debut as Tampa Bay’s coach following three seasons as defensive coordinator.

Dallas drove 54 yards to a field goal on the first possession, but didn’t score again while finishing with its second-fewest points in an opener.

Julio Jones had a 48-yard catch in the two-time All-Pro’s Tampa Bay debut to set up one of four first-half field goals from Ryan Succop, who had five attempts before the break without a punt from the Bucs.

CINCINNATI (AP) — Chris Boswell kicked a 53-yard field goal as time expired in overtime and Pittsburgh overcame T.J. Watt’s injury late in the fourth quarter to beat Cincinnati in a sloppy season opener for both teams.

Watt had one of four interceptions off Joe Burrow, who rebounded from a lousy start and rallied Cincinnati from a 17-6 halftime deficit. His 6-yard touchdown pass to Ja’Marr Chase tied it at 20 with 2 seconds left in regulation, but the game went to overtime after Minkah Fitzpatrick blocked Evan McPherson’s point-after try.

Watt, the Defensive Player of the Year, left the field and headed to the locker room shortly before the game went to overtime with a pectoral injury. Before that, he was his usual disruptive self, with a sack and a pick.

Burrow’s four interceptions were a career worst, and he was sacked seven times in front of what was supposed to be an improved offensive line. He was 33 for 53 for 338 yards and two touchdowns.

After struggling offensively through most of the season opener, Jamies Winston guided the Saints to three straight scoring drives. The first two ended with touchdown passes of 3 and 9 yards to Michael Thomas. The Saints converted one 2-point try, but failed on the other.

New Orleans got the ball back one more time, taking over at its own 20 with 48 seconds remaining and no timeouts. Winston connected on a 40-yard pass to Jarvis Landry and a 17-yarder to Juwan Johnson to set up Lutz’s winning field goal.

A personal foul on the Saints gave the Falcons a chance to pull out the victory, but Younghoe Koo’s 63-yard field goal attempt was blocked as the clock ran out.

Atlanta’s Cordarrelle Patterson rushed for a career-high 120 yards, including a 5-yard scoring burst, and Marcus Mariota made threw for 215 yards and added 72 on the ground, highlight by a 2-yard touchdown run.

Nick Chubb ran for 141 yards and Hunt had 70 total yards from scrimmage as the Browns won their season opener for the first time since 2004.

Mayfield overcame a slow start by leading the Panthers back from a 13-point fourth quarter deficit by running for a 7-yard touchdown and finding Robbie Anderson for a 75-yard touchdown strike. He then led the Panthers on a 64-yard drive in seven plays to set up Eddy Pineiro’s go-ahead field goal with 1:13 left in the game.

Jacoby Brissett, filling in for suspended Browns star Deshaun Watson, completed passes for 13 yards to Donovan Peoples-Jones and 9 yards to Amari Cooper to set up York’s winning kick, the longest for the franchise since 1984.

The game was a rematch of last season’s finale, which Las Vegas won on a field goal in the final seconds of overtime to knock the Chargers out of a playoff spot.

Herbert completed 26 of 34 passes and had a 129.4 passer rating despite Keenan Allen leaving with a hamstring injury in the first half and Mike Williams not having a catch until the fourth quarter.

Derek Carr was 22 of 37 for 295 yards and two touchdowns but was picked off three times. He connected 10 times with former Fresno State teammate Davante Adams, who was acquired from Green Bay in the offseason. Adams had 141 receiving yards, including a 2-yard touchdown in the fourth quarter.

Jackson went 17 of 30 for 213 yards, including a TD to Rashod Bateman, and an interception. The performance came hours after ESPN reported that Jackson turned down a five-year extension offer worth more than $250 million.

Joe Flacco, starting against the team whom he helped win a Super Bowl, was ineffective and wasn’t helped by a few drops and lousy pass protection. He went 37 of 59 for 307 yards and a touchdown and interception.

LANDOVER, Md. (AP) — Carson Wentz bounced back from throwing interceptions on consecutive plays early in the fourth quarter, completing his third and fourth touchdowns to give Washington a comeback victory against Jacksonville.

It was his first four-TD game since the day he tore the ACL in his left knee while with the Philadelphia Eagles in 2017. And it came with former Eagles coach Doug Pederson on the sideline in charge of the Jaguars for the first time.

Jaguars second-year QB Trevor Lawrence was 24 of 42 for 275 yards, a touchdown pass to James Robinson and the pick. Robinson also ran for a touchdown.

The game was never in doubt after the opening minutes, with Mahomes picking apart the Cardinals’ defense with his usual array of good decisions and deft passing touch. The quarterback was playing his first NFL game against Kliff Kingsbury, who coached Mahomes in college at Texas Tech and now leads the Cardinals.

After accumulating the most receiving yards (3,016) in a player’s first two years in the NFL, Jefferson set an all-time Vikings receiving record with 158 yards in the first half against a stacked Packers defense.

Kirk Cousins completed 23 of 32 passes for 277 yards without a turnover, targeting Jefferson on more than a third of his throws and keeping the Packers on their heels for most of the afternoon.

Aaron Rodgers’ first game without Davante Adams was a struggle, and the three-time defending NFC North champion Packers fell flat in their opener for the second straight season. Rodgers went 22 for 34 for 195 yards.

DETROIT (AP) — Jalen Hurts accounted for 333 yards and a touchdown and A.J. Brown had a career-high-tying 155 yards receiving in his Philadelphia debut, a win over Detroit.

The Eagles scored 24 points in the second quarter and had a 17-point lead in the fourth that was cut to three when Jared Goff threw a 22-yard touchdown pass to DJ Chark with 3:51 left.

Philadelphia sealed the win with Miles Sanders’ 24-yard run on third-and-2 from the Eagles 27 just before the two-minute warning and Hurts’ sneak that converted a fourth-and-1 from the Detroit 40 with 50 seconds left.

Sanders finished with 96 yards rushing and was one of three Philadelphia running backs to score.

MIAMI GARDENS, Fla. (AP) — Tua Tagovailoa passed for 270 yards and a touchdown and Miami provided an early look at its ability to contend in the AFC East by beating Bill Belichick and New England.

Second-year receiver Jaylen Waddle scored the Dolphins’ first offensive touchdown of the 2022 season, taking a fourth-down pass from Tagovailoa into the end zone for a 42-yard score. Waddle caught four passes for 69 yards.

Tyreek Hill, making his Miami Dolphins debut after the team traded for him during the offseason, led Miami’s receivers with eight receptions for 94 yards.

Patriots second-year quarterback Mac Jones threw for 213 yards with a touchdown and interception. Running back Ty Montgomery caught the Patriots’ only touchdown of the game. Damien Harris led New England’s rushers with 48 yards on nine carries.

Daboll didn’t hesitate to keep his offense on the field for the 2-point conversion, which snapped the Giants’ skid of five straight losses in season openers.

The Titans, the AFC’s No. 1 seed with a 12-5 record a year ago, had a chance to win as time expired. But Randy Bullock pushed a 47-yard field goal wide left after making two field goals earlier against one of his former teams.

HOUSTON (AP) — Matt Ryan rallied Indianapolis in the fourth quarter to force overtime against Houston in his Colts debut, but neither team could score on two overtime possessions each.

Indianapolis got the ball back with 1:19 left in regulation but was forced to punt — a sign of things to come in the extra period.

Fields shook off a rough first half, throwing a 51-yard TD to Dante Pettis in the third quarter and connecting with Equanimeous St. Brown for an 18-yarder early in the fourth to put Chicago on top 13-10. Jackson then picked off Trey Lance near midfield for his first interception since 2019 and returned the ball to the 21. That led to a 6-yard touchdown run by Khalil Herbert, making it 19-10.

The Bears got called for an unusual penalty near the end of the first half, when their holder got flagged for bringing out a towel to dry a small area of the field ahead of a field goal try. The 15-yard unsportsmanlike penalty wiped out a scoring opportunity and forced Chicago to punt.

Fields was 8 of 17 for 121 yards with two touchdowns and an interception.

Lance, drafted eight spots ahead of Fields, completed 13 of 28 passes for 164 yards and a touchdown.