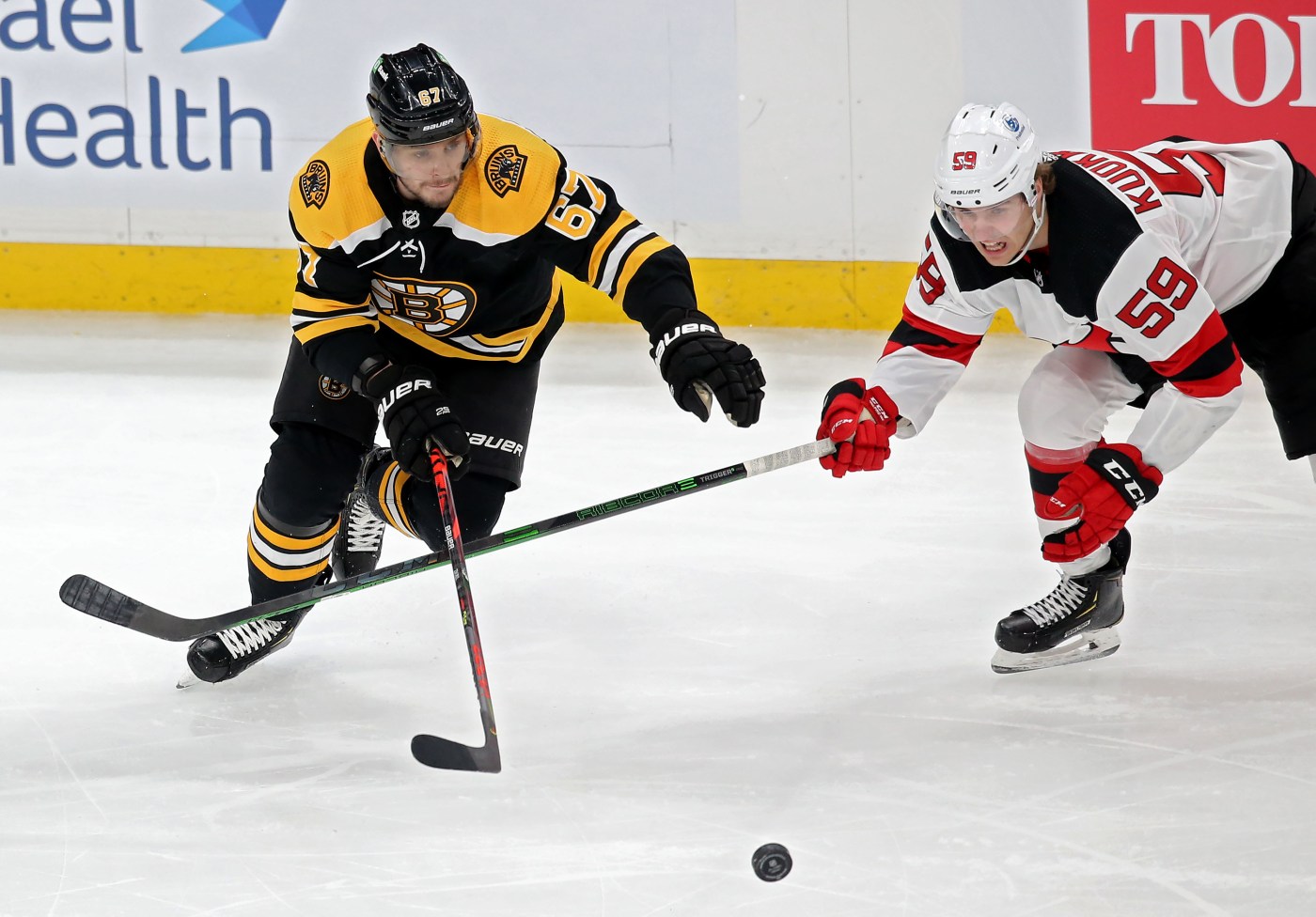 The Bruins’ blue line is starting to get crowded.

With Brandon Carlo deemed fit and ready to go for Tuesday’s tilt against the Dallas Stars after sitting out a week and half with a concussion, Jakub Zboril was the odd-man out on Tuesday.

It was the first scratch of the year for Zboril, who was plus-1 with no points and four shots on net in six games. He’s been averaging 15:33 of ice time a game and has a Corsi rating of 58.3% while seeing primarily offensive zone starts (over 70%).

Considering the numbers situation as well as the fact that the player is coming back from reconstructive knee surgery, Zboril needing to sit seemed almost inevitable at some point.

“I spoke with him this morning and we’re getting healthy on the back end. And we we need to get people in the lineup and people are going to have to move out,” said Montgomery on Tuesday morning. “Zboril’s been good. There are areas in his game where we want him to be more assertive in and we’ve talked to him about that. We need to see him apply that in our practices to get back in the lineup. He knows that. He’s coming off knee surgery. There’s going to be growing pains with that. Not right away is he going to be a confident NHL player to be able to play night in, night out for us. We expected that. But we expect him to be a big part of the Bruins through the course of the season. For his personal growth, there’s a huge space there I think he can attain.”

Montgomery wants to see more assertiveness from Zboril in the offensive and defensive zones.

“We do drills in practice to allow players to have the opportunity to do that,” said Montgomery. “Right now, we’re in (three games in four nights). He’s going to get back in. We’re shuffling bodies in and out just to get fresh legs and keep everybody involved. But we’re going to have a practice (Wednesday) and then there’s another practice coming before we go on the road (next week). Those are the opportunities. I think practice is important. I’ve always believed that and I love the way our team practices here. There’s a great culture here where players look to get better in practice.”

Zboril, the B’s first of three first-round picks in the 2015 draft (13th overall), was an early star of training camp. At one point, Montgomery said he was among the B’s top five players in camp. But he did level off.

“I think he started off so well in camp because he was excited to show everybody the great work that he’s done and he was excited to play,” said Montgomery. “And there are a lot of veteran NHL players when they come back to camp, they’re not excited for exhibition games. It’s why they probably only play two. And where it comes from is just not being sharp, being in a game rhythm because of the season-ending surgery. There’s always growing pains through that, for every player. We’re probably going to see it – I hope not so much – with (Brad Marchand and Charlie McAvoy) when they come back.”

Meanwhile, Montgomery said that there would be no limitations on Carlo, who has suffered from multiple concussions.

“He’s full-go. (Monday) was a pretty rigorous practice and he felt great today. So he’s a good hockey player. We need him in our lineup. It makes us better,” said Montgomery.

Anton Stralman is also still looking to get in the lineup after clearing up his work visa last week. …

Montgomery also put A.J. Greer back in the lineup after he sat out one game and Jakub Lauko came out. Staying in the lineup, and deservedly so, was veteran Craig Smith. The right wing had been scratched for two games before returning to the lineup for last Saturday’s game against Minnesota, during which he picked up an assist and was much more noticeable.

“It shows what a great pro he is,” said Montgomery. “That’s adversity, and it’s early in the year. I remember meeting together with him face to face and I was like, ‘I didn’t expect for us to be here.’ and he said, ‘Neither did I.’ And we were open and honest with each other. I said ‘I don’t expect you to come out again, but it’s upon you.’ And I thought he was terrific last game.” …

Montgomery sees former Bruins Tyler Seguin, whom he coached in Dallas, as returning to form after hip surgery that limited him to three games in 2020-21. Seguin conceded recently that he contemplated retirement because of the difficulties of the rehabilitation process.

He managed just 49 points in 81 games last season, but in the six games going into Tuesday’s at the Garden, he had 2-4-6 totals.

“I think Tyler’s been set back with some serious injuries in the past three years. And I think he’s really healthy this year and I think that’s why his game is back to where it’s always been, when he’s healthy. He’s an elite player in this league,” said Montgomery.