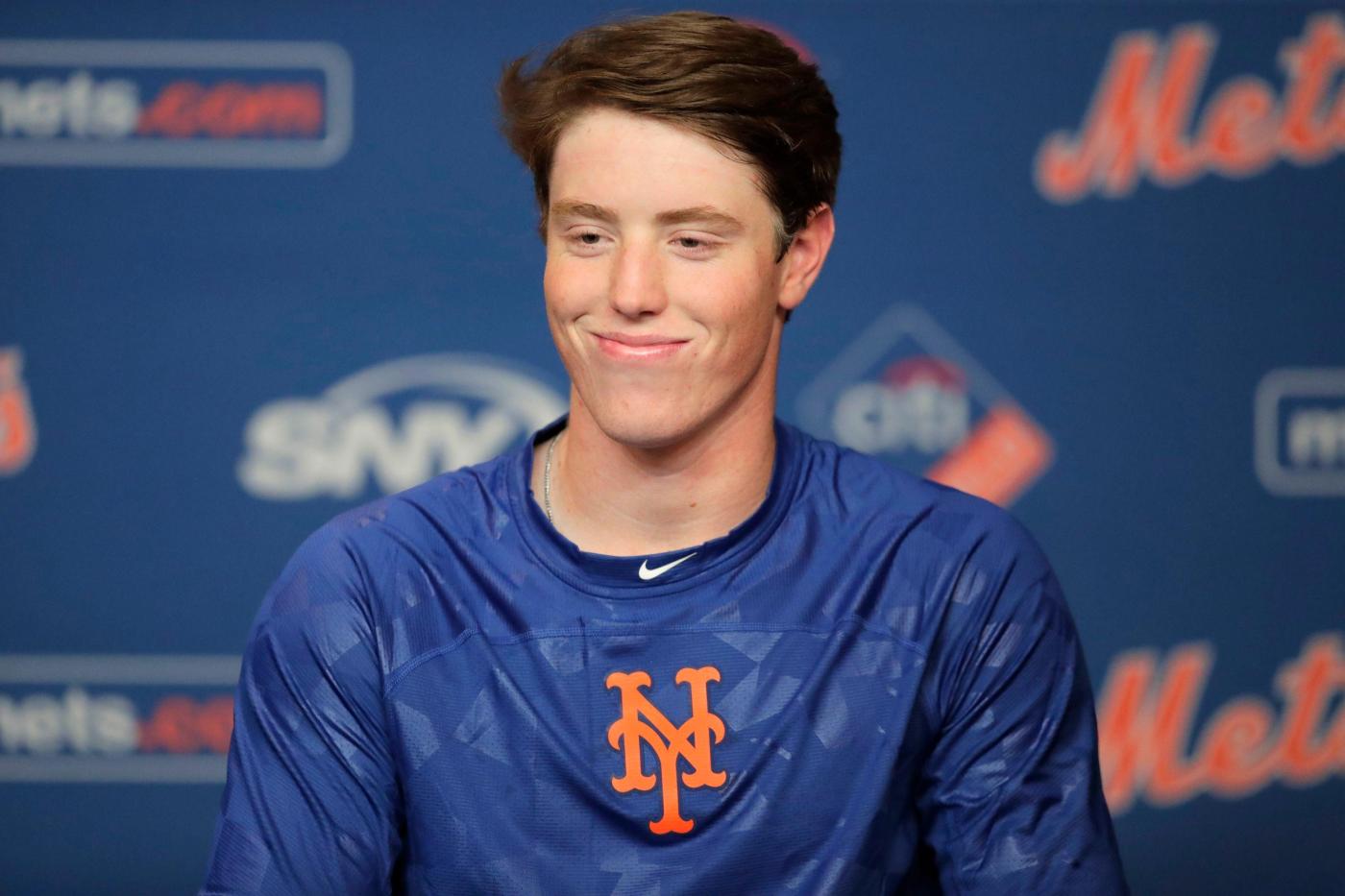 ATLANTA — It didn’t take long for the new kid to make an impact.

In his first MLB at-bat, Brett Baty turned a Jake Odorizzi curveball into a line drive home run. By going yard on the second pitch of his career, and first swing, the 22-year-old Baty became the fifth player in Mets history to hit a home run in their first ever at-bat. The 377-foot blast into right field put the Mets ahead 4-0 in the second inning and sent the dugout, as well as his family, into absolute hysterics.

“That was awesome,” Baty, who was wearing a jersey number to match his age, said after the Mets hung on for a 9-7 win over the Braves. “I was just looking for a pitch to drive and he left one over the plate.”

Baty said during pregame that not putting any big expectations on himself will be key. He also said, very diplomatically if not entirely truthfully, that getting called up to the big leagues wasn’t on his mind at all. In a very polished answer far beyond his years, he told reporters that winning games for the Triple-A Syracuse Mets was his main focus until getting the MLB promotion. Now that he’s here, Baty was able to reflect on the feeling of circling the bases in his first at-bat.

“Just pure joy,” he said. “To look up and see my family up there, be able to celebrate with them, it’s pure joy for sure.”

For the first game of Baty’s career, he batted eighth and played third base behind Max Scherzer. There are very few debut scenarios that could be more intense than a Mets-Braves series with the two division rivals separated by 3.5 games, but the injuries the Mets have suffered over the past week didn’t afford them the opportunity to shield Baty from the spotlight.

Baty mentioned that the original plan was to have him join the Mets on Tuesday, but air travel has a way of ruining plans.

“I didn’t make the first flight, so here I am today,” Baty said before the game.

Even with a brief third-inning rain delay interrupting his first day on the job, Baty continued to impress. He finished his MLB debut with a 1-for-4 line, and the home run wasn’t even his hardest hit ball of the night. In the sixth inning, Baty ended up with a fielder’s choice on a ball that he stung at 113 mph.

Scherzer, who has now played 423 more big-league games than Baty, was cruel and unusual to the Braves for 6.1 innings. In a series that could have been completely marred by the injuries to starting pitchers Carlos Carrasco and Taijuan Walker on consecutive days, Scherzer not only picked up the slack for them, he also put the Mets in position to get a split on Thursday.

“He’s something,” Buck Showalter said in praise of Scherzer. “He never ceases to show me why he is who he is.”

First-pitch strike after first-pitch strike led to strikeout after strikeout, eight of them to be exact. The Braves only had four plate appearances with runners in scoring position while Scherzer was pitching. None of those led to a hit. One of them did produce a Dansby Swanson sacrifice fly for Atlanta’s first run, and another was a walk by Michael Harris II that ended Scherzer’s night. A rested Adam Ottavino came in and tried to put that seventh-inning threat to bed, and even though the Braves got four runs out of it, it was too little, too late for them.

The thing about a proven, veteran team — Baty is the youngest position player on the Mets’ active roster by nearly five years — is that they rarely get held down for very long. After scoring just one run in their first two games of the series, the Mets decided to top that total in the first inning on Wednesday.

Starling Marte plopped one into the man-made body of water beyond the center field fence to begin the fun. Francisco Lindor followed him with a back-to-back jack to set a no-nonsense tone right away, and as things started to get away from the Mets late in the game, those homers (plus Marte’s second four-bagger in the seventh) proved to be massive.

“Two home runs to center field in the same game?” Showalter marveled. “That’s hard to do.”

The Mets came into the game 66-0 when leading after eight innings. Edwin Diaz ensured that they’d have that lead, taking over in the bottom of the eighth and ripping through the heart of Atlanta’s order. Trevor May got the Mets across the finish line, guaranteeing that Baty’s Hollywood moment wouldn’t come in a loss. There were some rumblings, though, that he went through some of the classic rituals that rookies are subjected to after their first game.

“I don’t know anything about that,” he said to uproarious laughter.