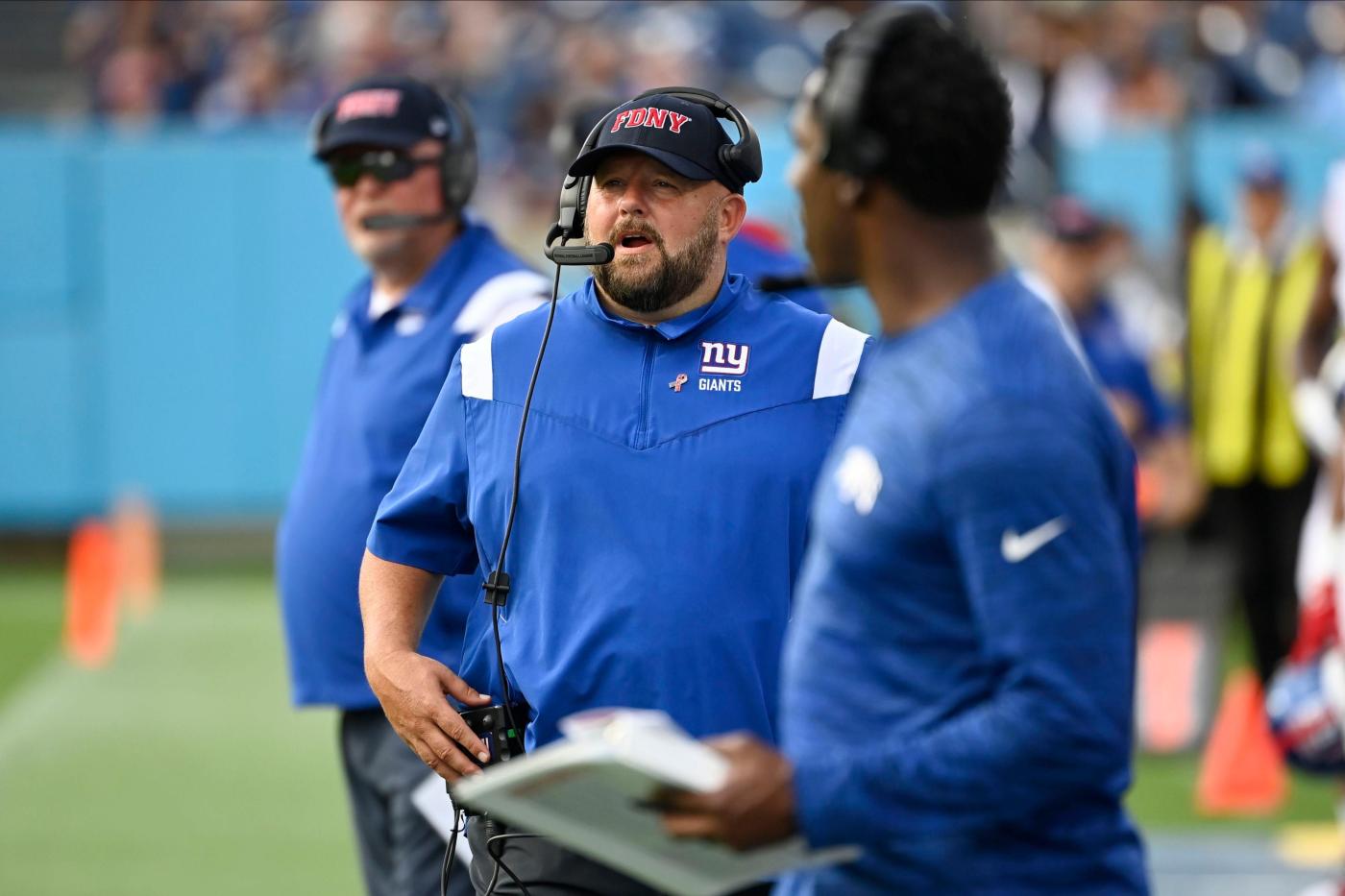 NASHVILLE, Tenn. – Brian Daboll’s late grandparents were everything to him.

Ruth and Chris Kirsten of West Seneca, N.Y., raised the Giants’ head coach. And they were married 68 years before they both passed away last fall in a span of three weeks.

So Sunday wasn’t about a first NFL head coaching win for Daboll. It wasn’t about his ballsy two-point conversion call for the win in the fourth quarter.

It was about his grandparents: how they got him here, and how they’re still with him.

“I don’t come from much,” Daboll said. “Those two people helped me get where I am.”

When Titans kicker Randy Bullock walked onto the field to attempt Sunday’s last-second field goal, Daboll grabbed the small urn on a chain around his neck that contains his grandmother’s ashes.

“This is what I was doing during the kick,” Daboll said during an emotional moment in the visitors’ locker. “I held the ashes of my grandmother … I just held them and looked up. That’s what I did.”

Daboll’s grandfather was with him, too. Oh, was he ever.

It was almost a year ago that Chris Kirsten died while Daboll was on the Buffalo Bills’ plane flying to this exact city, Nashville, Tenn., for a game against these same Tennessee Titans.

Daboll grew so choked up telling the story in Sunday’s locker room that, at the end, he had to duck into a private area to avoid breaking down in front of reporters.

“Here’s what happened,” he said. “I was on the airplane. My grandmother had just died. And I got a game ball and I gave it to my grandfather. And he died three weeks later.

Daboll said his grandfather pumped his fist and winked at him in response.

“So I left. Got on the airplane,” Daboll continued. “My wife started blowing me up. I said just tell me. She said, ‘He’s gone.’ I landed. She said he looked at me and he said, ‘They on the airplane yet?’ She said ‘yeah.’”

Then Chris Kirsten gave one more wink before he passed.

Fast forward to Sunday, and Daboll carried a fighting spirit into Sunday’s victory in his grandparents’ honor. Down 20-13 late in the fourth quarter, Daboll said he decided the Giants would go for two after a touchdown “when we got the ball” with 5:27 left in the game.

“Going for the win,” Daboll said. “We’re gonna be aggressive. That’s what we want to do. That’s the mindset I want the players to have. If it didn’t work, I can live with it. You’re an inch away. I trust Saquon [Barkley].”

Daboll said he even “grabbed a couple defensive players that busted their tails out there and said if we score we’re going for two, you good with that? And they said F yeah.”

“No, he told us,” Lawrence said with a grin. “And we respect his decision. I love that out of him.”

The point, though, is that the players felt empowered.

“When we scored, I saw him put up the two sign,” Barkley said. “We made eye contact. He gave me that look. I knew what the play was gonna be and looked back at him and said ‘F yeah.’

“He’s a man of his word,” Barkley added. “He told us he’s gonna be aggressive and it’s gonna be on the players to make plays, and in that situation he did exactly that. You have a coach like that, it makes you want to fight for him in that situation.”

Wideout Kenny Golladay added: “He’s got our back, we got his back.”

Daboll said sticking his neck out, and exposing himself to possible criticism if the decision failed, is part of the job.

“Absolutely,” he said. “That’s what you sign up for when you’re a leader. Being a leader’s tough. It’s not easy. There’s gonna be plenty of times I fail. And I understand that. But I try to prepare the best I can.”

In the end, Daboll’s trust in his players paid off. Bullock’s kick hooked left. The Giants won.

And while Daboll admitted “I was hoping the son of a b—h would miss it” as he watched Bullock, he later explained his thoughts were elsewhere: on Ruth and Chris.

“It was weighing heavy on me,” he said. “When he missed it, I thought about them.”