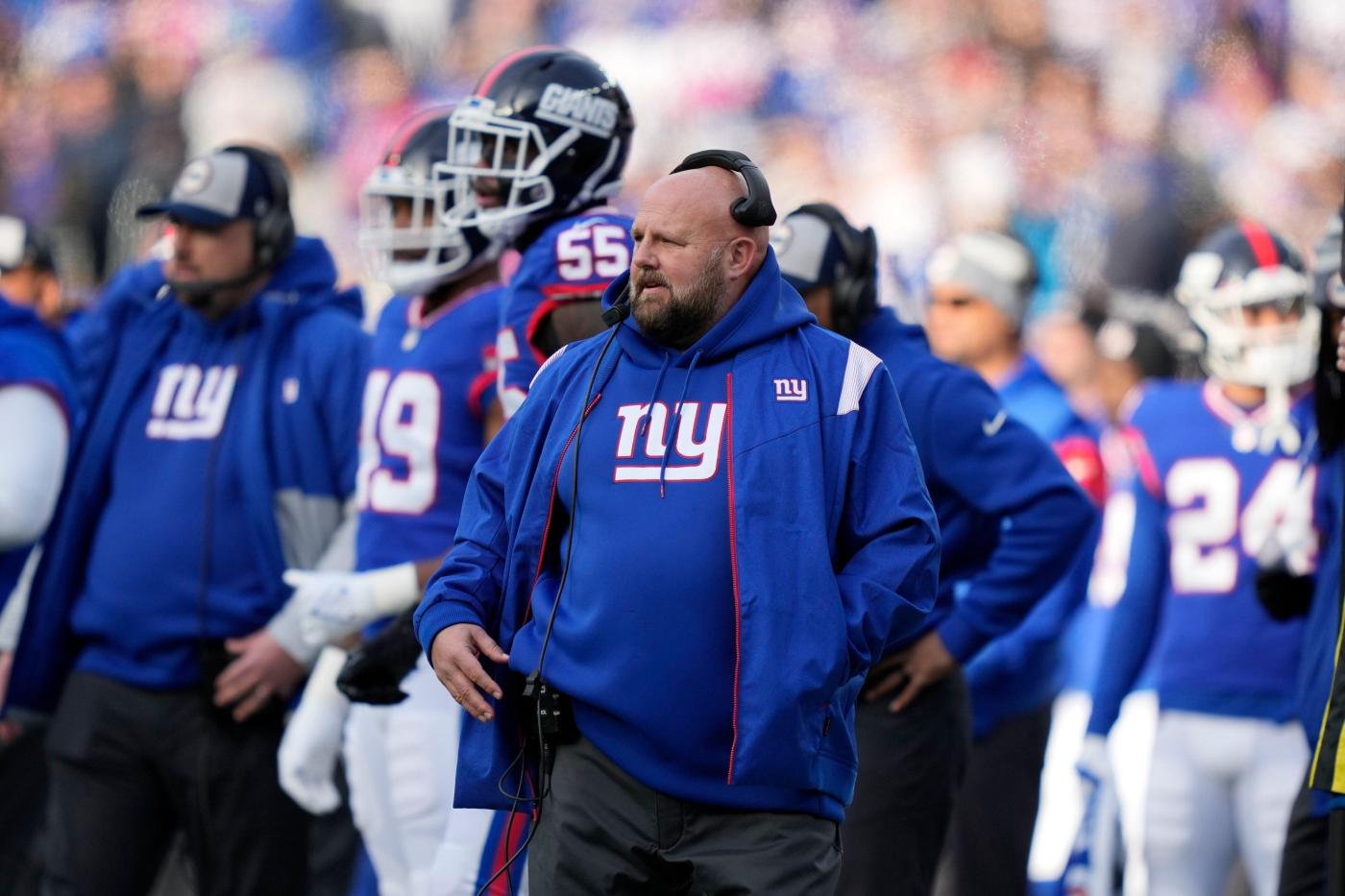 There are no excuses for the Giants to lose Sunday’s game to the Indianapolis Colts if they want to be taken seriously. And it’s impossible to believe that they will.

Jim Irsay’s team is in tank mode. He pulled confidant Jeff Saturday off an ESPN set midseason to put him onto their sideline as interim head coach.

The Colts’ coaches and players are still trying to win, of course. They nearly upset the Vikings two weeks ago.

But they surrendered the largest comeback victory of all time (33 points) to Minnesota. They’ve lost eight of their last nine.

Quarterback Nick Foles’ rust in last Monday night’s 20-3 loss to the Chargers was startling. And the Colts’ players are playing for nothing other than personal pride on a 4-10-1 team.

The Giants (8-6-1), on the other hand, are playing for everything. They can clinch their first postseason berth since 2016 with a win Sunday.

Win and they’re in.

And don’t for a second think that Brian Daboll would be consoled by any narrative of overachieving in his rookie season if Daboll — a 2000 New England Patriots grunt who waited 22 years for this opportunity — lost to a guy who hadn’t coached in college or the pros before Nov. 13.

“It’s an important game for us,” Daboll said.

No, the Giants need to win this game to validate progress, to ensure this 2-5-1 second-half slide doesn’t undo the promise of their 6-1 season start.

What, you think John Mara would feel good about Year 1 if he saw arguably the worst current team in the NFL dispatch his Giants in the home finale at MetLife Stadium?

That isn’t what’s going to happen.

Daboll, Wink Martindale and Mike Kafka gave the Giants a competitive advantage in a lot of games this season, and there is no chance their experience won’t make a difference against Saturday’s team.

Frazier faces as tall a task as any with an offensive line that has underperformed this season and no Jonathan Taylor in the backfield to help the recently-inserted Foles.

If the Giants’ special teams are clean and Jones’ offense is efficient, the Giants will win this game easily. And if they do, they will have earned whatever home locker room celebration unfolds.

These have been a long six years for the organization and a grueling ride for the likes of Jones, Saquon Barkley, Dexter Lawrence and plenty more.

The Giants are taking nothing for granted in beating the Colts, though. The club, interestingly, has launched an organization-wide initiative to try and make sure fans simply show up to the game.

They know their last home game was an embarrassing 48-22 loss to the Philadelphia Eagles that saw the stadium empty save for green jerseys in the fourth quarter.

They also know people might be dragging on a Sunday New Year’s Day. Martindale had a suggested solution for that.

“I know it’s New Year’s Day, so if you have one going on on New Year’s Eve, keep it going and take it all the way through the game,” Martindale said with a smile. “If not, get plenty of rest and be ready to be loud on Sunday … Everybody’s talked about how we want playoff football around here. Here’s what we need: We need playoff fans to show up for this game and be as loud as they can be.”

There are other scenarios that can get the Giants into the playoffs on Sunday even if they tie or lose. But those shouldn’t matter, and they can’t let this drag into Week 18′s visit to the Eagles, even if Philly might be resting starters for that season finale.

The Giants cannot lose this game to the Colts. And they won’t. And that will clinch the NFC’s No. 6 playoff seed, a likely first round visit to San Francisco or Minnesota, and the right for one night to celebrate and toast accomplishing what few believed they could.

Here are the seven ways the Giants can clinch a playoff berth on Sunday: