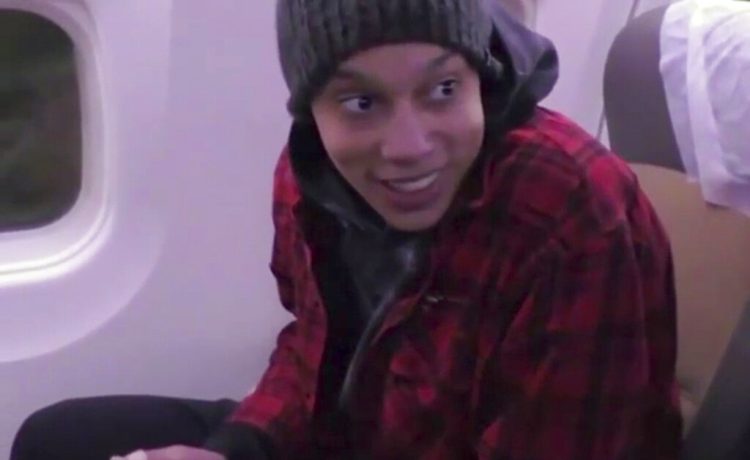 WNBA star Brittney Griner has been freed from Russia in a prisoner swap for notorious arms dealer Viktor Bout, while American Paul Whelan remains behind bars after being left out of the deal.

Griner, who was sentenced to nine years in Russian prison, was flying home on Thursday following the prisoner exchange, President Biden announced from the White House.

“I spoke with Brittney Griner,” Biden said. “She’s safe. She’s on a plane. She’s on her way home.”

“After months of being unjustly detained in Russia, held under intolerable circumstances, Brittney will soon be back in the arms of her loved ones,” the president added. “And she should have been there all along.”

The two-time Olympic gold medalist, who also played professional basketball in Russia, was arrested at a Moscow airport in February when police accused her of having vape canisters with cannabis oil. After the Russian trial, she was sent to a penal colony.

“Thank you to @POTUS, the advocates & every person who fought to free Brittney Griner,” Massachusetts Congresswoman Ayanna Pressley tweeted. “An unjustly imprisoned WNBA athlete and Black queer woman is finally returning to her wife, her family, and her teammates. Welcome home.”

Over the summer, Griner wrote a letter to Biden, urging the president to not forget about her and the other American detainees like Whelan — a Michigan corporate security executive jailed in Russia on espionage charges that his family and the U.S. government have said are baseless. He was sentenced in 2020 to 16 years in prison.

“We never forgot about Brittney,” Biden said. “We’ve not forgotten about Paul Whelan, who’s been unjustly detained in Russia for years.”

“Sadly, for totally illegitimate reasons, Russia is treating Paul’s case differently than Brittney’s,” the president added. “And while we have not yet succeeded in securing Paul’s release, we are not giving up. We will never give up.”

Brittney’s wife Cherelle said she had “sincere gratitude” for Biden and his administration.

“Today my family is whole, but as you all are aware, there’s so many other families who are not whole,” Cherelle said.

The Griners “will remain committed to the work of getting every American home, including Paul, whose family is in our hearts today as we celebrate BG being home,” Cherelle said.

Whelan’s brother David said he was “so glad” that Brittney was heading home.

“The Biden Administration made the right decision to bring Ms. Griner home, and to make the deal that was possible, rather than waiting for one that wasn’t going to happen,” David said in a statement.

“I can’t imagine he (Paul) retains any hope that a government will negotiate his freedom at this point,” he later added. “It’s clear that the US government has no concessions that the Russian government will take for Paul Whelan.”

Massachusetts Congressman Bill Keating said he has been in touch with the Whelan family.

“While we are very happy that Brittany Griner is returning home, we cannot forget we still have Americans unlawfully detained in Russia — specifically Paul Whelan,” Keating tweeted. “I have been in touch with his family, and they and Paul deserve all of our country’s efforts to bring him home.”

Bout, the Russian felon once nicknamed “the Merchant of Death,” is a former Soviet Army lieutenant colonel whom the Justice Department once described as one of the world’s most prolific arms dealers.

He was serving a 25-year sentence on charges that he conspired to sell tens of millions of dollars in weapons that U.S. officials said were to be used against Americans.

“This is a gift to Vladimir Putin, and it endangers American lives,” he said of Bout’s release. “Leaving Paul Whelan behind for this is unconscionable.”

What do you think of the prisoner swap? Visit bostonherald.com to vote on our poll.

Herald wire services were used in this report.