Todays Though > News > Brockton clamps down on defense, edges BC High in thriller
News

Brockton clamps down on defense, edges BC High in thriller 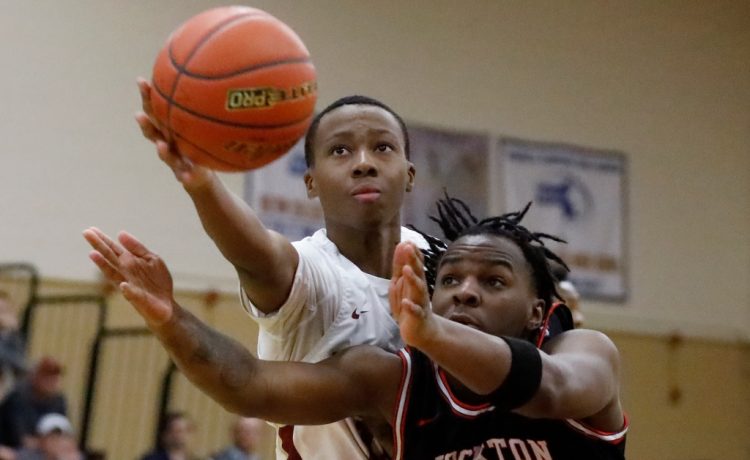 So far this season Brockton has certainly showed its chops.

Braxton Baker scored 14 points while the Brockton defense held BC High to one field goal over the final five minutes as the Boxers overcame a late second-half deficit to defeat the Eagles, 62-57, on Saturday afternoon at McNiece Pavilion.

Brockton, on the heels of close wins over Hingham and BC High, will now turn its attention to No. 9 Lawrence.

“Our guys were very patient,” Brockton coach Manny DeBarros said. “We’ve worked on trying not to do too much. Our guys shared the basketball late. They bought in that in order for us to win against a good BC High team they were going to have play unselfish.”

With the game tied 56-56 and just under 50 seconds left, BC High held possession with a chance to take the lead. The Boxers’ long 2-3 zone defense, however, forced a turnover and John Francois hit a layup through contact to give Brockton a two-point advantage.

On the Eagles’ next possession, Ivan Yhomby (23 points) split a pair at the line to trim the deficit to one but Chidi Nwoso and Baker hit four free throws late around another BC High turnover to secure the victory for the visitors.

The sides traded blows in the first half with Brockton taking an early eight-point lead on the heels of Baxter before the Eagles’ Matt Draheim poured in nine of his 16 first-half points to pull BC High within 35-34 at the break.

Behind Yhomby the Eagles grabbed the lead in the third quarter as the junior guard connected on a three-point play to help push BC High in front, 46-45, going into the fourth.

“This is big for us with our schedule early on,” DeBarros said. “Braxton really stepped up. I love what he’s brought to the table. We’re just going to keep getting after it.”

Avonte Lamore led a quartet of double-figure scorers with 26 points as Durfee defeated Bishop Connolly 74-57 in a nonleague contest.

Caroline Batchelder had a goal and an assist as Archbishop Williams defeated Arlington Catholic 5-1 in the Catholic Central League.