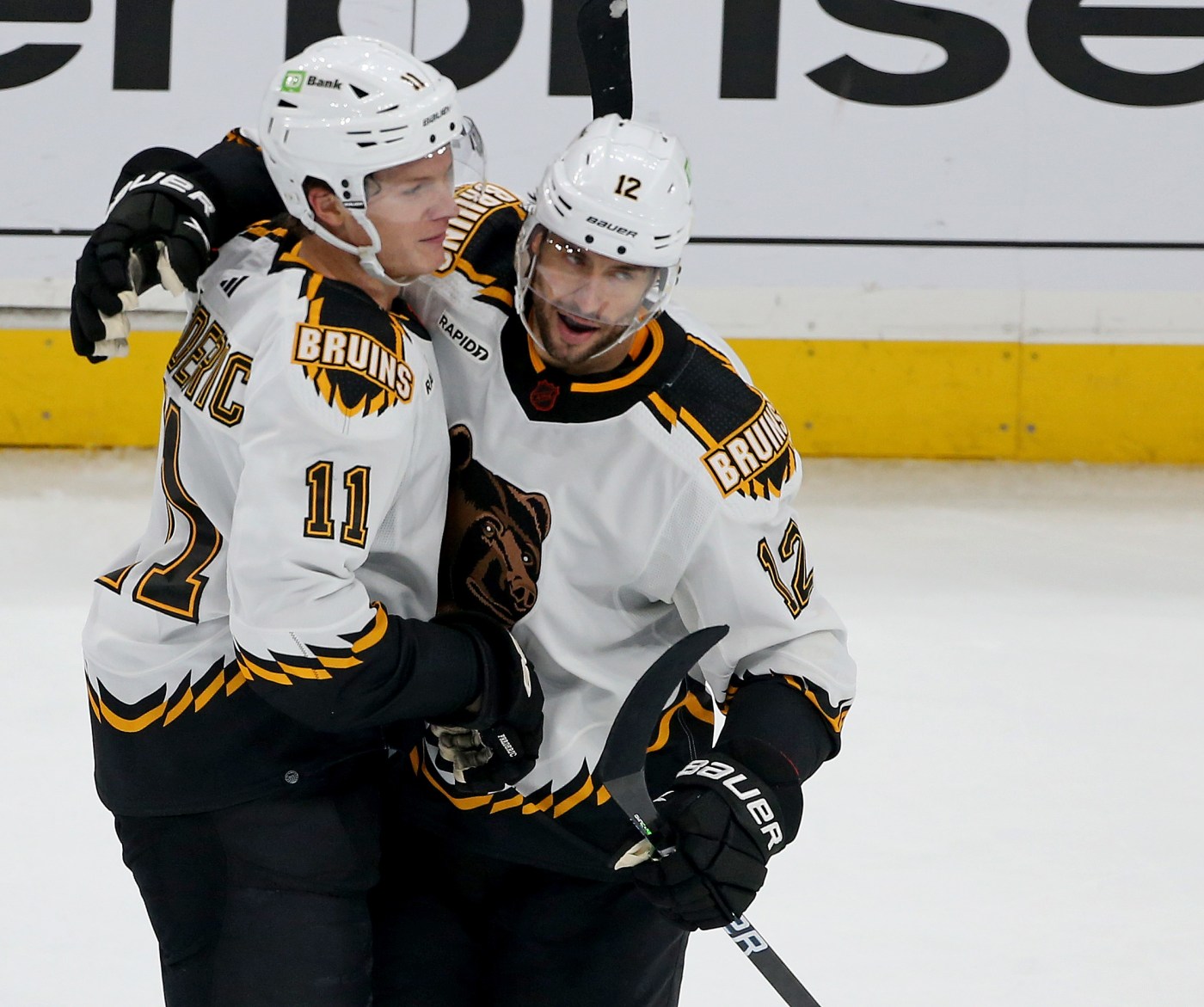 The Bruins’ sampling of the NHL’s iron continues on Monday night at the Garden in a showdown that adds a little spice to the team’s challenging schedule.

Former B’s coach Bruce Cassidy will make his return to Causeway Street with his nearly-as-hot-as-the-Bruins Vegas Golden Knights, who come into Boston with 18-7-1 overall record as well as a remarkable road mark of 11-2-1. The Knights will be attempting to deliver the B’s first home loss of the season (they currently own the record for most home wins to start the season at 14-0).

Will Cassidy’s return provide more motivation for the B’s?

“Maybe for a couple of guys. We’ll see, “ said a smiling Trent Frederic, who has seemingly found his game under new coach Jim Montgomery after some stops and starts in his first two NHL seasons.

Jake DeBrusk, of course, famously asked for a trade two summers ago, a request that was made public in November 2021 after a healthy scratch. He then rescinded after the coaching change was made.

“For sure, that’s pretty obvious,” said DeBrusk, who scored his eighth goal of the season in Saturday’s win over the Avalanche. “Honestly for me, it’s one of those things where I came in with a clean, fresh slate after everything last year and I was looking to try to help this team and do whatever I can to help. I think it’s going to be maybe a little bit weird at the beginning for both sides, but we’re playing against Vegas and we’re not playing against (Cassidy) in a sense, so it’s one of those things where we’re happy with where our game’s at, we’re happy with the changes that we made. Our record speaks for itself. We’re just worried about our game in here. The home crowd has been pretty intense lately and we want to keep this thing going.”

While some players chafed under Cassidy’s demanding style, more than a few good things happened under his watch. Brad Marchand not only became a truly elite player under Cassidy, he blossomed into a leader. Charlie McAvoy has grown into a legitimate Norris Trophy candidate. Even the DeBrusk we’re seeing now is not unique to this season. It is more an extension of what he was able to do in the second half of last year than the right buttons being pushed by the new coach.

The bulk of the credit goes to the players in those instances, of course, but Cassidy certainly had a guiding hand.

But if you had to pick one player who was benefiting the most from the coaching change, it is Frederic. And it has taken some coaching from Montgomery. Frederic did not have a good training camp and found himself as a healthy scratch in the season opener in Washington. But he’s hung on to a spot in the lineup ever since then, missing two games to injury.

Frederic is currently on a line with Charlie Coyle and Taylor Hall and is coming off his first two-goal game in the NHL – and looked pretty natural in doing so. First he scored on a put-back of a rebound in the first period and then whistled home a one-timer to finally put Colorado to sleep on Saturday night.

But it’s the rest of his game that has put him in position to get on the scoreboard – his skating, his puck battles and, mostly, his confidence.

“The guys I play with have helped me a lot, Hallsy and CC have been great. They’ve shown a lot of confidence in me and also Monty has been great about it. I give credit to them. It’s been fun,” said Frederic.

For the B’s to get to where they want to go, it’s imperative for players like Frederic to pop so that they’re not overly dependent on the top two lines and power play.

“Freddy, if you watch him in practice, he scores. That’s what he does. Monty’s really kind of pushing him to embrace that,” said Marchand. “CC is at another level this year and obviously Hallsy is a very dynamic offensive guy. They’re finding that chemistry and they’re making a lot of plays. Freddy with his big body is understanding how to take the puck to the net and go to areas where he can score. Teams won’t be able to keep him out of the front of the net and he’s going to get a lot of opportunities. He’s been great for us and another guy who’s come a long way this year. It’s what you need. To be successful, you need the young guys to step up, take control and have a bigger impact. I think we’re really seeing that this year, guys coming in and embracing roles and thriving in them.”