Bruins grind out 3-1 win over Stars 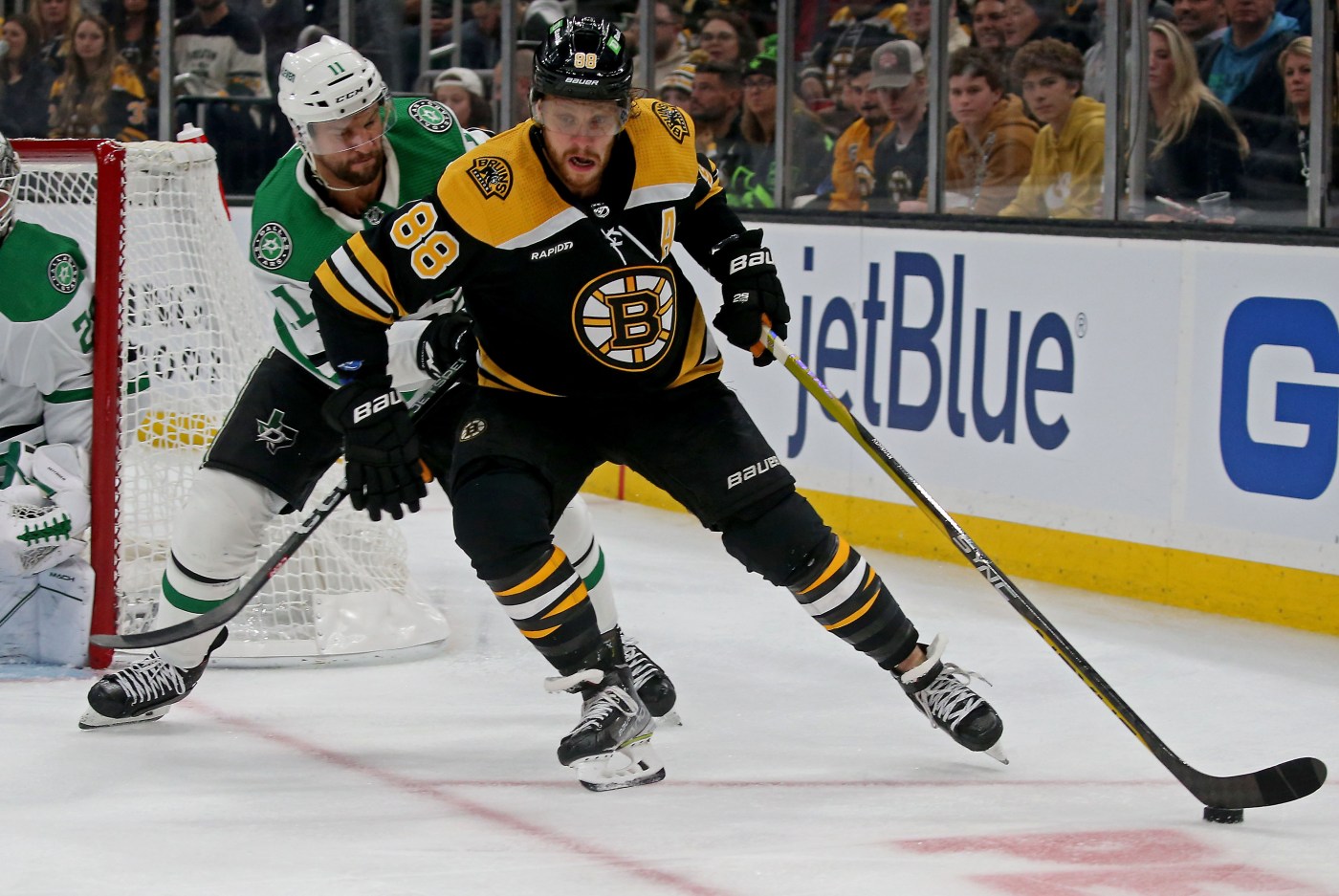 After a wild, offense-happy start to the season, the new Bruins are starting to look a little more like the old Bruins. And that’s a good thing.

The B’s received goals from David Pastrnak and Taylor Hall and, after withstanding some pressure in the third period, Patrice Bergeron’s empty-netter snuffed out any hope the Dallas Stars had of tying the game and the B’s grinded out a 3-1 victory at the Garden.

The Bruins took a 2-1 lead into the third period, but the Stars controlled play in the early going until Trent Frederic took a delay penalty at 7:04, but the B’s came up with a strong penalty kill, giving the Stars very little.

Dallas continued its territorial advantage at even strength until Radek Faksa tripped  Pastrnak to stem the Stars’ momentum.

The B’s also needed goaltedner Linus Ullmark to be good, too, and he was, turning away 30 shots, including a tester from Joe Pavelski late in the game.

One of the biggest concerns coming out the B’s overtime win over the Minnesota Wild on Saturday was their inability to get anything going on their 5-on-4 power play.

The Stars, who were playing on the second half of a back-to-back, gave them some practice in the first period. They gave the B’s a PP just 1:13 into the game. Though they couldn’t score before a Hall trip nullified the second half of it, the B’s did move the puck well and generated a couple of chances that missed the net.

They couldn’t score on their second chance, either, but they finally made good on the third try.

Connor Clifton delivered a clean but very hard reverse check along the boards on Roope Hintze that initially stung the Stars’ top centerman. Old friend Colin Miller didn’t like it and went after Clifton, who landed a shot and then scored a takedown.

After Miller got the extra two for roughing, the B’s made the visitors pay when Hampus Lindholm put the puck on a tee for Pastrnak, who blasted his patented one-timer over goalie Jake Oettinger’s glove shoulder at 12:49, Pastrnak’s fifth of the season.

Meanwhile, Ullmark – getting his third straight start – was both good and fortunate. He stopped all 11 shots and when Radek Faksa had a wide open net at which to shoot late in the period, the puck jumped over his stick and the B’s were able to take a 1-0 advantage into the first intermission.

But the Stars tied it up early in the second period, shortly after it appeared the B’s were about to go up by two goals. At one end, Frederic had a glittering chance with a wide open net from 10 feet out in the slot, but Oettinger made a tremendous stick save.

Then the Stars tied it up on a funky looking goal at 1:48. Ty Dellandrea took the puck in deep and all the way behind the net, brushing Ullmark’s pads on the way by, knocking the goalie out of position. With the net open, Dellandrea got it out from to Wyatt Johnston for an easy goal.

But after a tight-checking period from both teams, the B’s pushed ahead again with 1:03 left in the second. With the David Krejci line moving the puck along the perimeter in the zone, it appeared that the Stars lost Hall, who was left all alone at the right circle. Pastrnak found him for a one-timer and, with Krejci creating traffic in front, the going-wide shot went off Ryan Suter and in for Hall’s fourth goal of the season, his third in three games.