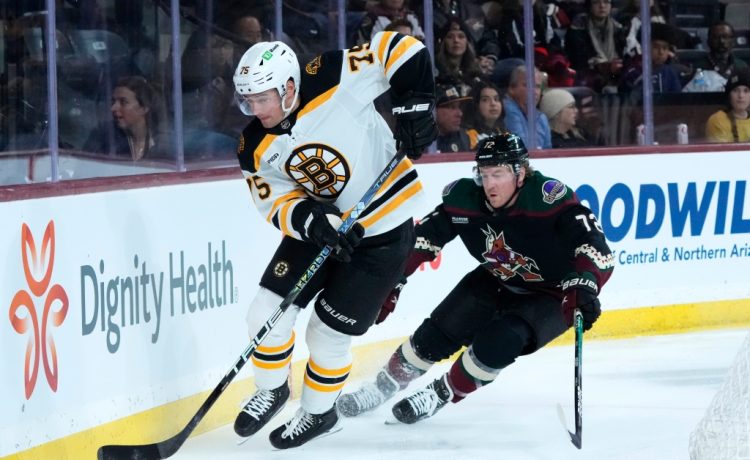 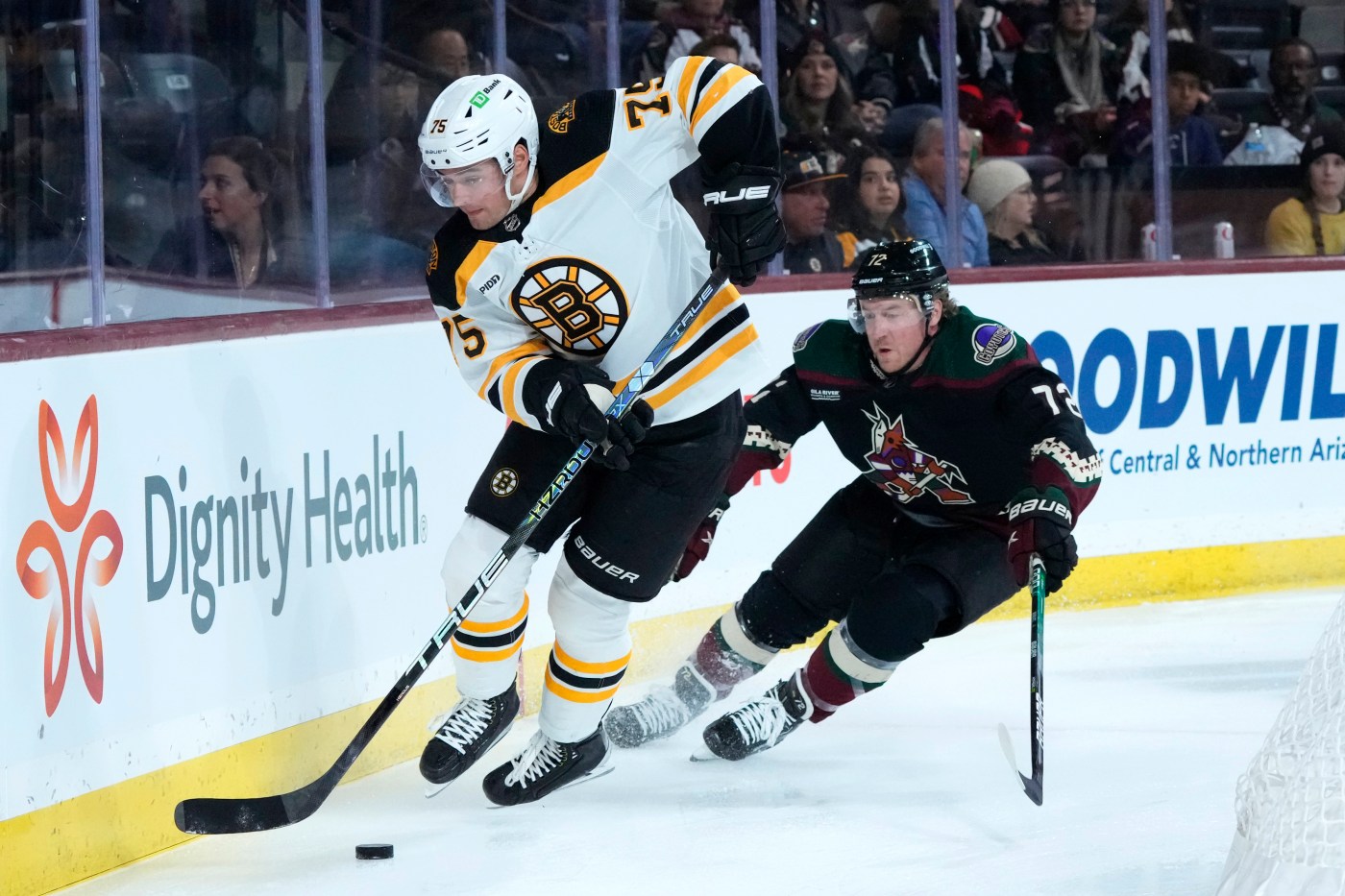 The last time the Bruins lost to the Arizona Coyotes, it was at the start of the 2010-11 season and that season ended with the B’s raising the Stanley Cup.

At least the B’s have that to hang their hat on.

In a frustrating loss that ended in controversy, Lawson Crouse scored with 13.5 seconds left in the third period after the B’s fumbled the puck when it appeared an icing call was incorrectly waived off at the last instant. As goalie Jeremy Swayman raised his hand to indicate to his defenseman Derek Forbort that an icing was coming, the puck went through the edge of the crease before going over the line and hitting the side of the net. At that instant, the linesman for some reason waived it off the and puck was live. Forbort then  over-skated the puck, Matias Maccelli pounced on it and fed Crouse out front for the goal and a 4-3 victory at Mullett Arena.

The B’s felt they got jobbed.

“I was shocked,” said Nick Foligno, who had scored a late tying goal. “I actually couldn’t believe it. I was almost dumbfounded at that point. Not to knock those guys, it was just a surprising call. A hundred times out of a hendred, that’s icing.”

Coach Jim Montgomery, whose team held a 46-16 shot advantage, also believed it should have been an icing. There were also a couple of questionable non-calls in the third period.

“It’s a great environmnt, but it’s a tough environmnt, too. Things seem to happen a lot quicker here. Do we think we could have had a couple of more power plays? Yeah, but we could say that every night,” said Montgomery.

The Coyote ended a 19-game losing streak to the Bruins and the B’s suffered just their fourth regulation loss of the season. And they can thank goalie Karel Vejmelka (43 saves) for the victory.

The Coyotes had broken a 2-2 tie 57 seconds into the third period when Shayne Gostisbehere sent Clayton Keller away on an odd-man rush. Nick Schmaltz just beat a recovering Hampus Lindholm and he was there to collect Keller’s pass and beat Swayman.

But the B’s were able to tie it up with 5:29 left in regulation. With time winding down ona power play, David Krejci fed Foligno for a tough-angle one-timer that the veteran buried past Vejmelka for his fifth of the season.

It appeared as though the teams were headed to the 3-on-3 overtime but disaster struck. And though they might have been robbed of at least a point, the fact of the matter was the B’s didn’t do what they almost always have done this year — win the third period. Though the wrong call was apparently made, the goal still should not have happened. And despite the lopsided shots differential, the chances that Arizona did get were good ones.

“It happens fast,” said Patrice Bergeron. “I think there’s a debate for icing there. But then the linesman is there to make a decision based on a fraction of second. We’ve got to keep playing, bottom line. You can’t point fingers and blame it on decisions. Because that’s the last thing you want to do. As a team, you want to own it and be better next game.”

Right off the bat, the Coyotes looked excited to be at their cozy, not-ready-for-the-NHL home on the Arizona State campus after a 14-game road trip and they scored just 23 seconds into the game. Swayman was forced to make a stop with his glove that he couldn’t freeze and, after Charlie McAvoy had his stick knocked out of his hands, the Yotes regained control. With McAvoy in the corner retrieving the stick, short-time Bruin Josh Brown was able to walk right down the slot and snap one over Swayman’s glove shoulder for his second goal in as many games against the B’s this year.

But the B’s got their feet under them quickly. They wound up outshooting Arizona 15-6 in the first and tied the game on a power play. The B’s drew a roughing penalty on Liam O’Brien after Trent Frederic made a terrific rush and cut in front of the net but goalie Vejmelka made a terrific stop. In the ensuing scrum, O’Brien got two minutes for going over the line with Charlie Coyle.

On the advantage, McAvoy put the puck on a tee for David Pastrnak, who blasted his 19th goal past Vejmelka at 4:52.

Despite the ice tilting in the B’s favor for the rest of the first, the score remained tied.

It appeared that the Coyotes regained the lead early in the second period after Matias Maccelli set up Jakob Chychrun tap-in goal. But B’s coach Jim Montgomery challenged for an offside when the puck came just outside the zone well ahead of the scoring play and the goal came off the board.

Then at 7:48, the B’s took their first lead of the game. From behind the net, Jake DeBrusk fed Charlie Coyle and he jammed his seventh of the season past Vejmelka on his second try.

But they couldn’t put the Coyotes away. After the B’s failed on a couple of chances to get the puck out of their zone, Lawson Crouse tipped home Shayne Gostisbehere’s point shot past Swayman at 10:40.

The B’s had numerous glittering chances to regain the lead. Vejmelka made saves on Pastrnak and DeBrusk on back-to-back shots. Shortly after that, Brad Marchand hit Hampus Lindholm on a pretty backdoor play, but again Vejmelka was there for the stop.

The B’s had a late power play, but they could not get it past Vejmelka and, despite holding a 38-12 shot advantage, the B’s were deadlocked with Arizona going into the third.

It didn’t end the way they wanted it to, and they now they’ll be challnege to prevent their first losing streak of the year. They face the Golden Knights in Vegas on Sunday.