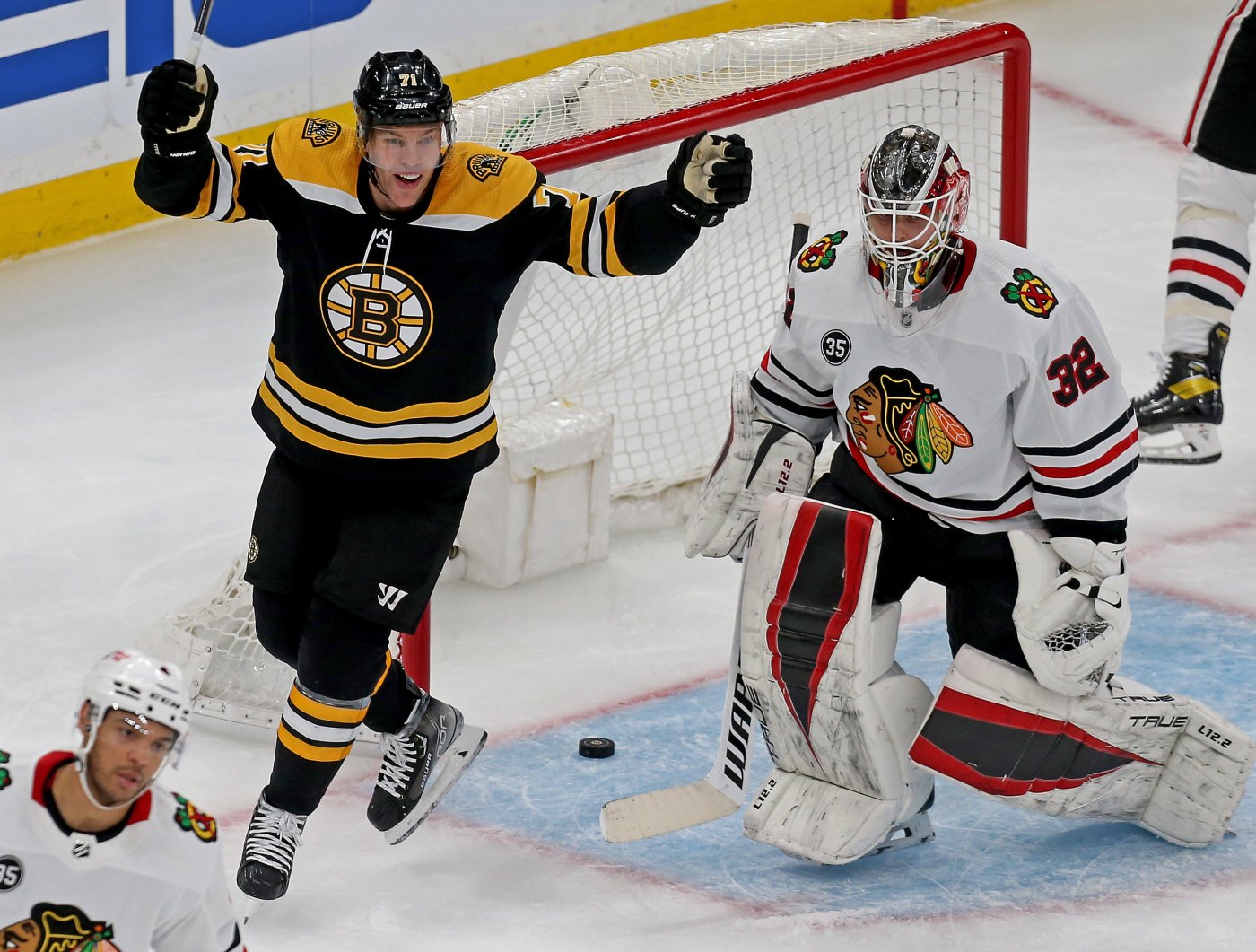 The news on the Bruins’ injury front was not as rosy on Sunday as it was Saturday after the B’s 4-0 win over the Flyers.

While Fabian Lysell remains day-to-day with what looks like a hand/wrist injury, Taylor Hall was downgraded to week-to-week with an upper body injury that he suffered Saturday. Hall appeared to suffer the injury in the second period when he was high-sticked by Flyer defenseman Ronnie Attard and crashed hard to the ice.

If the Hall injury bleeds into the regular season, which opens for the B’s on October 12 in Washington, that would create some interesting – and challenging – top six possibilities.

Coach Jim Montgomery said that he’s contemplating creating an all-Czech line of Pavel Zacha, David Krejci and David Pastrnak, in part because they’ve learned the game and think the game in similar fashion.

“They come from the same school of thought with their upbringing, so let’s see what it looks like,” said Montgomery. “It’s the same for Russians, the same for Swedes. There’s a school they’re brought up in and a style of play that makes it a little simpler for them to understand each other. It’s not a language thing, it’s more of a school of the way they’re raised in the thought of hockey. The schools they have and the way they play is consistent. My time in Russia (in 2003-04) when I went there in one of my last years playing was simply to learn how they develop players, because I had an eye on being a coach. And it’s unreal how everybody plays the same way. So it’s pretty easy for Russian players and I’ve seen the same way in the other European countries.”

That would leave some options for the Patrice Bergeron line that no one envisioned when camp opened. With Brad Marchand (hips) on the shelf till late November and now Hall out until who knows when, the leading candidates are A.J. Greer (who skated on the line with Bergeron and Jake DeBrusk on Sunday), Trent Frederic and Nick Foligno.

“That’s what the rest of camp is for,” said Montgomery. “We’re going try things out and obviously Bergy is going to have a huge say on who that person is because I’m going to lean on him as far as chemistry. He and Zacha still is an option. Hopefully we’ll figure it out in the next 10 days.”

Lysell, meanwhile, won’t play in the B’s preseason game on Monday in New Jersey but is still a possibility for Wednesday’s game in New York against the Rangers. Perhaps the youngster could help shore up the top six if he can heal up quickly, maybe move Jake DeBrusk back over to his natural left side so the right-shooting Lysell can go on his strong side. We shall see….

Speaking of DeBrusk, he certainly had his skating legs on Saturday, at one point drawing a penalty on a near breakaway. But both he and Montgomery believe he’s got some things to work out.

“He’s getting better,” said Montgomery. “I did like his speed and I liked how he had an attacking mindset. He just needs to get out of the summer habits like a lot of players do – stopping on pucks when we need him to stop on pucks and reloading right away, getting above pucks, some of the details that allow us to hopefully overwhelm teams when we get more solidified as a group.”

DeBrusk called Saturday’s game “a good step” but that he still has “a long way to go.” Slow starts have been an issue with DeBrusk in the past, and avoiding another one has been a focus for him.

“It always has been for me. I think that’s something that’s always been talked about since I’ve been here, my starts, so I think that last year I had a pretty decent one so I’m trying to lean off of that experience,” said DeBrusk. “It’s more so just where my game is at. Honestly, at the beginning of the year, it’s kind of a frenzy mode either way. It’s one of those things where you can get a couple lucky ones, a couple of greasy goals. But it’s just a matter of how the game feels and doing what you can to help the team win. It’s not necessarily about my production off the the beginning. I want that and I think we need that but it’s more so how I can impact the game with things like my speed and with minutes and things like that.”…

Even with the Hall injury possibly opening things up for some players, there is still some tough competition in the bottom six that needs to be sorted out. And DeBrusk said that that’s felt in the room and on the ice in practice.

“It’s a nervous feeling in a way, but an excited nervous feeling,” said DeBrusk. “Some guys have played well in these games of late and you can tell how their confidence is growing and how you feel good after you score a couple of goals. It puts pressure on other guys as well, but I would say it’s more of an excited feeling. It feels like the calm before the storm. But a soon as we hit the ice, it’s been pretty intense. I think the morale is high with the group. Everyone wants everybody to do well but at the same time, everyone wants to make the team. So I think it brings the best out of everybody from the bottom up.”…

Connor Carrick, who missed the last few days of practice with an upper body injury, returned to practice.