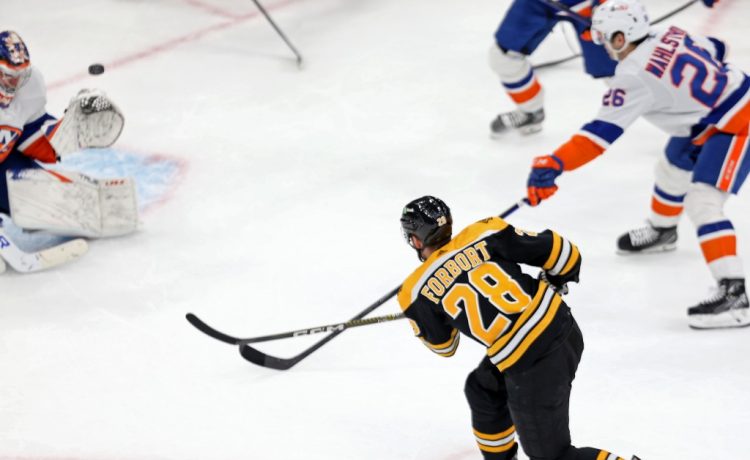 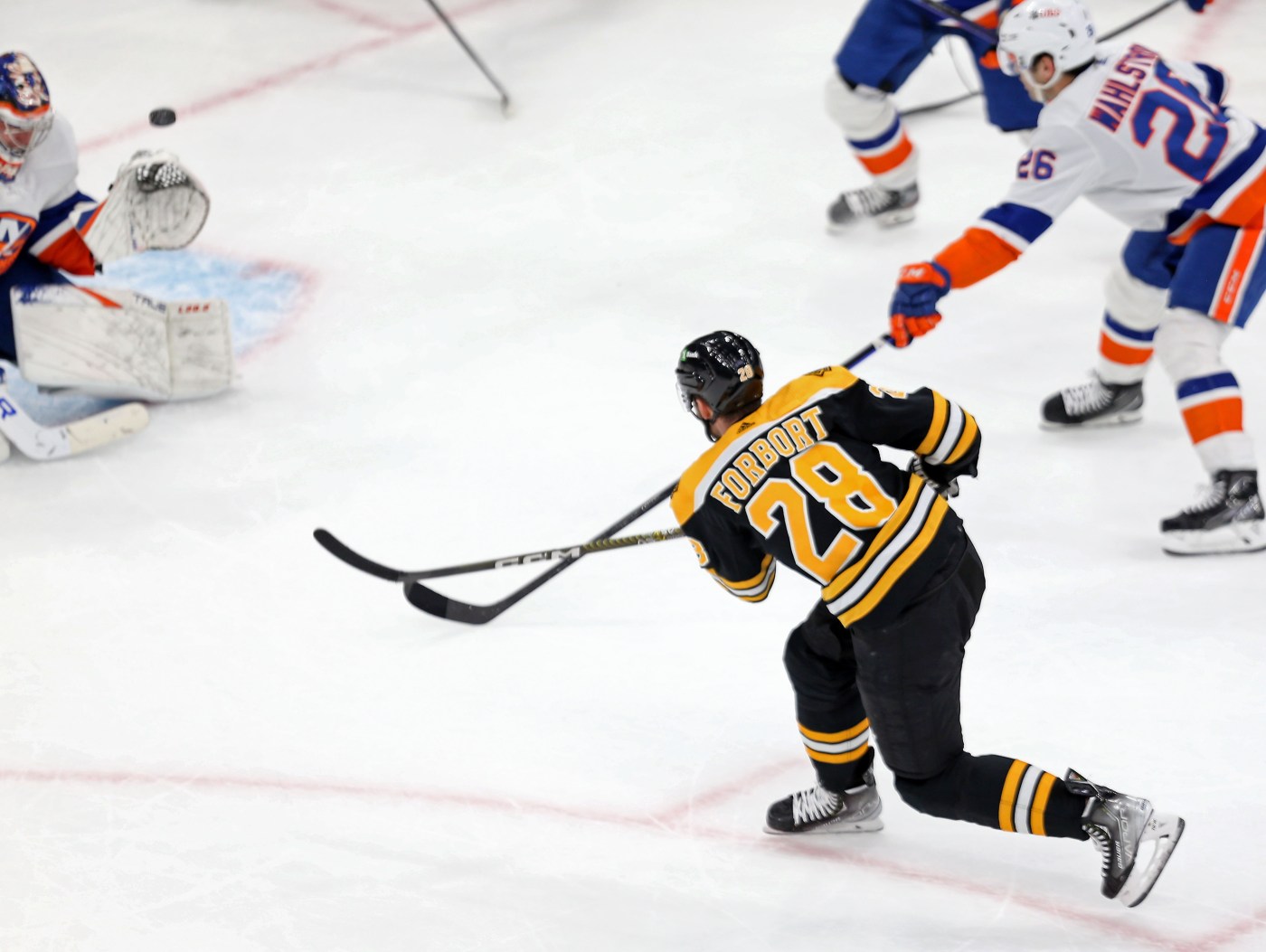 The Bruins squandered a couple of leads to the New York Islanders but still managed to pull out two points in a shootout victory at the Garden on Monday.

Jake DeBrusk and David Pastrnak scored in the shootout and Linus Ullmark walked it off with a stop onJosh Bailey to lift the B’s to a 4-3 victory.

It was not easy. The B’s, playing their first game back from successful western swing, looked heavy-legged at times, but they still pulled it out.

The Islanders had wiped out an early 2-0 Bruin lead and and then Casey Cizikas tied it up once again at 3-3 at 4:40 of the third period on a typical Islander goal. Cizikas picked up a loose puck and took at around the net. His wraparound attempt deflected off Derek Forbort, who given the B’s the 3-2 lead with a shorthanded goal late in the second period, and popped past Linus Ullmark.

The B’s had a great chance to regain the lead with five minutes left but Semyon Varlamov made a terrific save on David Pastrnak off the rush.

They continued to push hard for the rest of rest of regulation and probably should have gotten a power when Hampus Lindholm was taken down in the slot before the puck arrived, but the arms stayed down and the game went to extra sessions.

The first six minutes of the game looked like the typical one back from a western swing – sloppy for the home team. The Islanders were all over the B’s, coming up with a handful of quality scoring chances, a few of which Linus Ullmark turned away (including a robbery of a Josh Bailey backhander that appeared destined for the back of the net), others on which the Isles just missed their mark.

But when Zach Parise took a goalie interference penalty at 6:34, things quickly swung in the B’s favor with two goals from Jake DeBrusk (10, 11) in 19 seconds.

On the power play, he got his stick on a David Pastrnak wrister and it dribbled through Semyon Varlamov’s pads.

Then on the ensuing shift, DeBrusk threw a backhander into the slot for a pinching Forbort but it went off a Islander defender’s stick and past Varlamov at 7:07.

At that point, Islander coach Lane Lambert used his timeout and it seemed to settle his charges down. They went back to work in the B’s end, thwarting Bruin breakout attempts and, with the hockey gods giving out fortuitous bounces, the Islanders got theirs.

From the right point, Noah Dobson sent a puck toward the net that went off a Bruin skate out high and then off Josh Bailey’s skate past Ullmark.

The B’s clung to their one-goal lead into the first intermission, but they needed to get better. They were charged with 11 giveaways in the first period, and it felt like it.

The Islander forecheck continued to give the B’s problems at times in the second period and, eventually it caught up to them. At 11:43, the Isles tied it up after Cal Clutterbuck and Bailey refused to allow Charlie McAvoy and Hampus Lindholm to break out the puck. Bailey gathered the puck and fed it back to Dobson at the right point and he unleashed a perfect, low slapper that hit the far post and went in.

When A.J. Greer was nailed with a questionable roughing penalty at 16:39, it looked like everything was going the Isles’ way. But the B’s not only came up with a huge kill, they regained the lead on a pretty shorthanded goal at 18:28.

DeBrusk kicked a bouncing puck to himself and broke out of the zone. Once he gained the Islander zone, he dropped it it for Pavel Zacha. Zacha, filling in as centerman with the David Krejci out of the lineup, showed a good center’s patience and vision before zipping a sharp pass to Forbort in the high slot. Forbort picked his spot over Varlamov’s glove shoulder and sniped the go-ahead goal, the first shorthanded goal of his career.