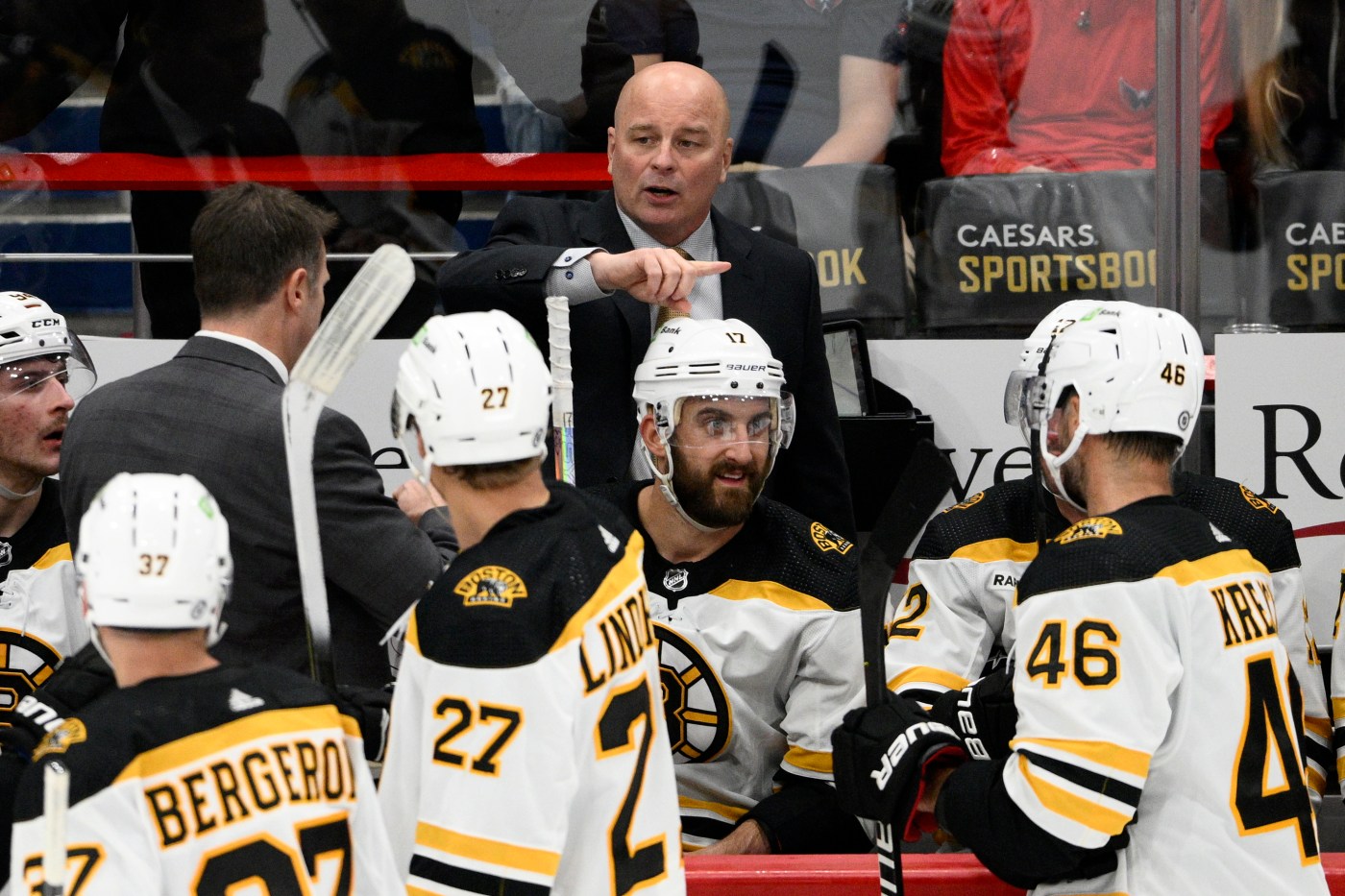 The time for the Bruins to make some hay is now.

Not only are the new go-go B’s playing their home opener on Saturday night at the Garden against the rebuilding Arizona Coyotes, it is the start of a stretch in which they play six of their next games at at the Garden, with the lone roadie being a trip across the border to play the Ottawa Senators.

With Charlie McAvoy and Brad Marchand expected to be out till late November, and Jake DeBrusk for the time being (ruled out for Saturday with an upper body injury; Trent Frederic will make his seaosn debut), the B’s need to secure as many points as they can before embarking on what should prove to be a difficult road trip in late October/early November when they venture out to play the Blue Jackets, Penguins, Rangers (looking like they could challenge for East supremacy with wins over Tampa and Minnesota already) and Toronto.

And though this team – especially with the way it’s currently constructed — should not apologize for gaining two points on any night, the season-opening victory in Washington was a mixed bag. With some new-found freedom for the defenseman to jump into the offensive zone under coach Jim Montgomery, some blueliners, especially Mike Reilly, played with it like it was the new BB gun they got for Christmas. And it nearly poked their eyes out.

Sometimes it worked out beautifully, like the time Reilly jumped into the play and was the first leg of a tic-tac-toe play that ended in a pretty Taylor Hall goal. Other times it didn’t, such as with the two-odd-man rush goals when a turnover and a blocked shot high in the offensive zone and went the other way. Fortunately for the B’s, the former outweighed the latter.

While nobody wants to see the B’s go into a defensive shell midway through the second period, they could have been a touch more prudent when they were up 3-0. You live and learn, and learning in a victory is optimal.

It would be unfair to think everything you see on opening night is how it’s going to be for the rest of the season. Wrinkles do get ironed out. But right now more than ever, the B’s need their goaltenders to provide a safety net. Linus Ullmark certainly held up his end on opening night, stopping 33 of 35 shots.

Around this time last year, many Bruins fans were wondering just what their team had bought when GM Don Sweeney signed goalie Ullmark to a four-year, $20 million contract.

Most observers felt like the then 28-year-old netminder had been in a difficult situation in Buffalo playing for the habitual doormat Sabres and couldn’t show off his talents to the best of his abilities. The thinking was understandable

But you never know how a player will respond to a new situation. And very early last year, Ullmark was not exactly setting the world ablaze. After a few blips in the preseason, Ullmark was 3-3 with a .barely respectable .903 save percentage through his first six game before eventually getting his game on track.

There has been no such slow start this year. So far in the preseason and now with the opener under his belt, his comfort level off the ice is showing.

“It was new team, new city, new everything. I was in Buffalo for a long time in upstate New York and just getting to know everybody was a challenge in itself,” said Ullmark after the game. “I had a whole new organization. And it’s not just the team, you’ve got the trainers, you’ve got the physical (therapist), the doctors. You want to be on top of everything and know everybody by their first name basis and stuff like that. So obviously, yeah, you can say it was a little bit of a transition. And leading into this year, we were settled into our place and schools and everything. And when everything works off the ice, it feels way better getting on the ice.”

As for the new system that’s being played in front of him, the bottom line for a goaltender never changes.

“It comes down to stopping the puck, obviously,” said Ullmark. “There are going to be some minor changes obviously, however we play and interact with each other out there. But it was the first game out of 82 and we come out with the win and I’m looking forward to the next one.”

With Montgomery’s stated plan of alternating his goalies through the first four games, it will be Jeremy Swayman’s start against Arizona. He should be ready for a little more action than usual.

Montgomery said Matt Grzelcyk (shoulder) is day-to-day and could make his season debut by the end of next week.