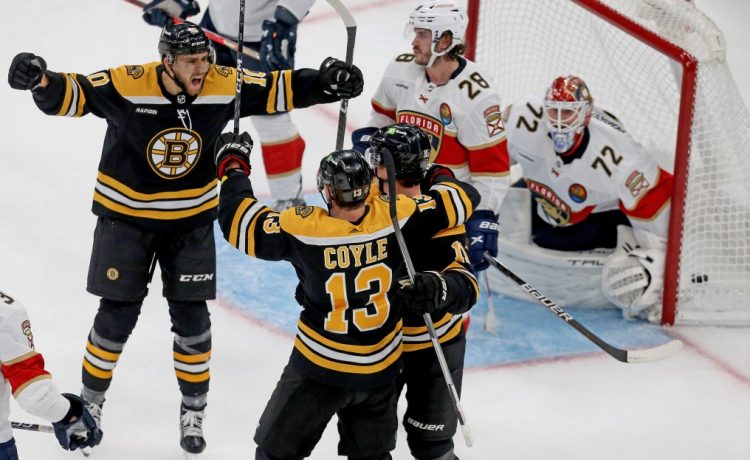 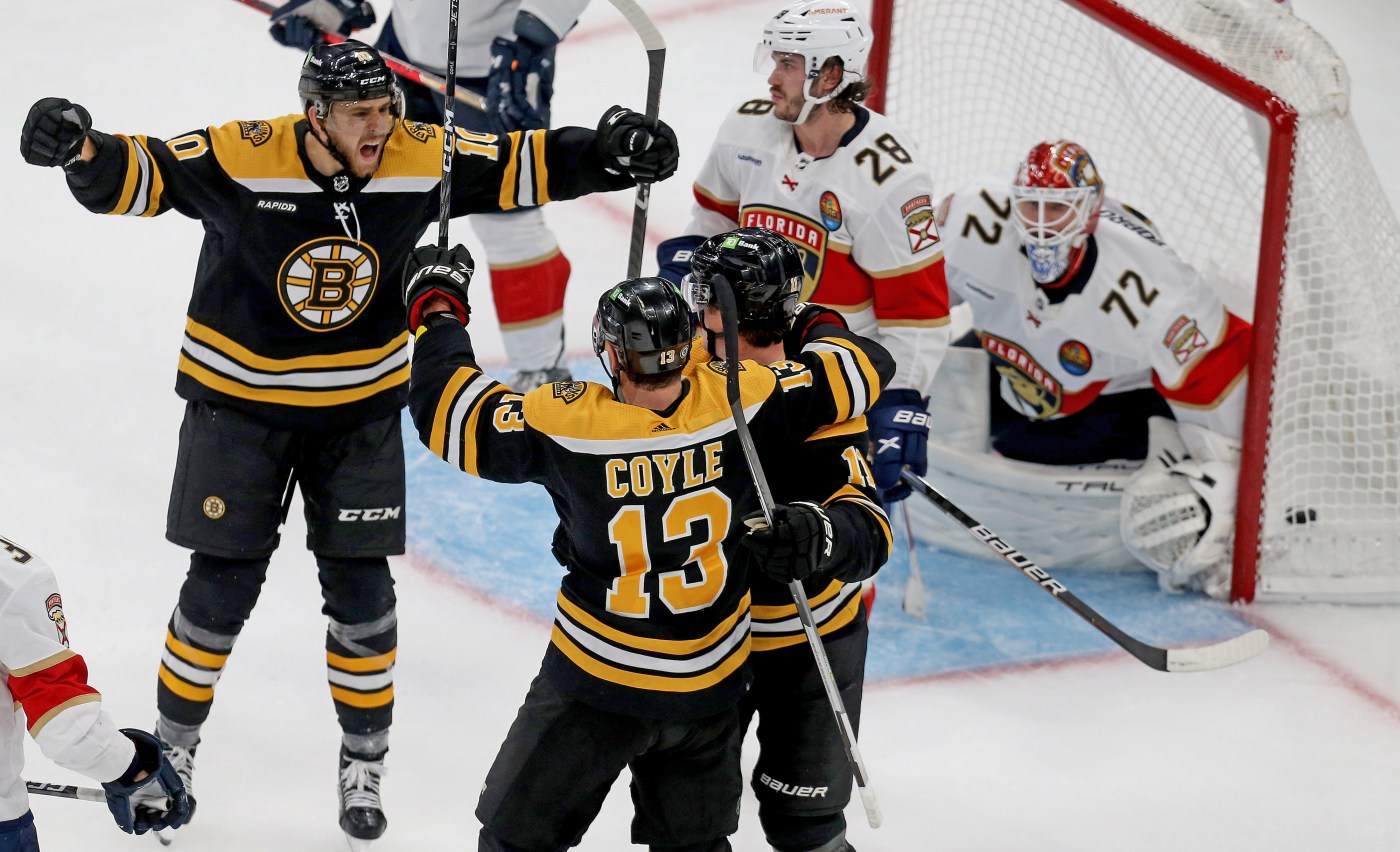 Perfect would not be the way to describe the Bruins’ overall game right now.

But their record through three games? Yes, it is indeed just that.

The B’s improved to 3-0 with a 5-3 victory over the defending Presidents Trophy-winning Florida Panthers at the Garden on Monday. The B’s now have scored 16 goals in three games, with 12 different goalscorers.

Neither team was at full strength, but it was fun, competitive game between two of the top Atlantic Division teams that saw Jake DeBrusk notch two goals and a pretty assist in the victory. Linus Ullmark, meanwhile, had another terrific game, stopping 37 shots, including 16 in the third period, many coming with the Panther goalie pulled.

DeBrusk, who had suffered what appeared to be a hand/wrist injury in the season opener, was not expected to play, but he took part in the B’s optional morning skate and felt no pain.

“It was funny, actually. I didn’t know if I was going to be playing Thursday or Tuesday. I felt good this morning and I was thinking possibly (Tuesday in Ottawa) and I got asked ‘Why not tonight?’ And I thought, ‘yeah, why not tonight?’” said DeBrusk, who celebrated his 26th birthday.

While the B’s are still without Brandon Carlo, Matt Grzelcyk and Charlie McAvoy on the back end, Florida had its challenges as well. Defenseman Brandon Montour was a late scratch and the Panthers started with five defensemen, which went down to four after Aaron Eckblad had to leave the game at 12:35 of the second period.

And it was in the third period that the B’s wrested control of what had been a tight game away from Florida, pulling away with a 4-1 lead. The Panthers scrapped back and got it within a goal when they scored with goalie Sergei Bobrovsky pulled. But DeBrusk finished it off with a rather daring empty-net goal when he picked off a pass in the neutral zone, spun around and fired the shot from the wrong side of the red line with 1:03 left.

“I’m hoping it goes in the cage, or else you look kind of dumb,” said DeBrusk sheepishly. “That one was lucky. I was just trying to win a puck battle and just kind of went for it and I was on the ground watching it go in. Yeah, that’s a birthday bounce if I’ve ever seen one.”

At the start DeBrusk proved immediately that that his hands were fine — and that there was never anything wrong with his legs. On the first shift of the game, he deflected a low-to-high pass intended for Gustav Forsling out of the zone. As Forsling fumbled with the puck just outside the Boston blue line, DeBrusk poked it away and he was off on a breakaway. He then ripped a wrister past Bobrovsky for his first of the year just 21 seconds into the game.

But breakouts have not been crisp for the B’s this year, and early in the second, it bit them again. Pavel Zacha had a pass picked off by Matthew Tkachuk in the neutral zone and, a few seconds later, the Panthers tied it up on a Tkachuk-to-Sam Bennett play.

“Mentally, we were tired today, for whatever reason. We were tired, we were slow, we weren’t moving pucks. And it wasn’t just on breakouts. There wasn’t a structural part of our game where I thought we were really good tonight,” said coach Jim Montgomery.

Despite that assessment, Montgomery loved the way the B’s responded to a dust-up in the middle of the second when the Panthers took exception to a kneeing penalty from Tomas Nosek.

“I just love the way we’re battling for each other,” said Montgomery. “You have Danny Renouf, you have A.J. Greer, you have everybody in there. I didn’t see the hit, but they were trying to get at Nosek. But we were five. We were a pack a wolves in there together.”

Disaster nearly struck again on the breakout when a Charlie Coyle backhand pass in the neutral zone went off a skate and went back the other way, giving Sam Reinhart a clean breakaway but Ullmark came up with a terrific glove save.

Off the ensuing faceoff, DeBrusk’s jets paid off yet again. The Panthers won the draw but Eckblad could not control it. DeBrusk churned his legs and almost had a breakaway but Forsling was at least able to cut that off. DeBrusk stuck with the play, however, and made a brilliant backhand pass to Patrice Bergeron for the goal 12:35. Eckblad left the game after that goal.

With the Panthers down to four D, the B’s created some breathing space on a spectacular goal from David Pastrnak, pretzeling Marc Staal, and then Trent Frederic scored on a wraparound.

The B’s then let the Panthers back in the game with a couple of late goals – a Forsling slapper at 12:58 and a Colin White goal with Bobrovsky pulled — as they have been wont to do with opponents in this young season. But if they have a tendency to leave the door ajar, the B’s have also showed a penchant for closing it just in time.