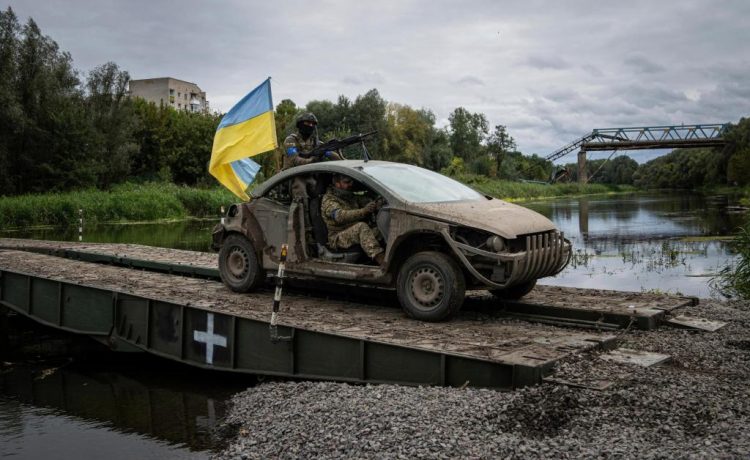 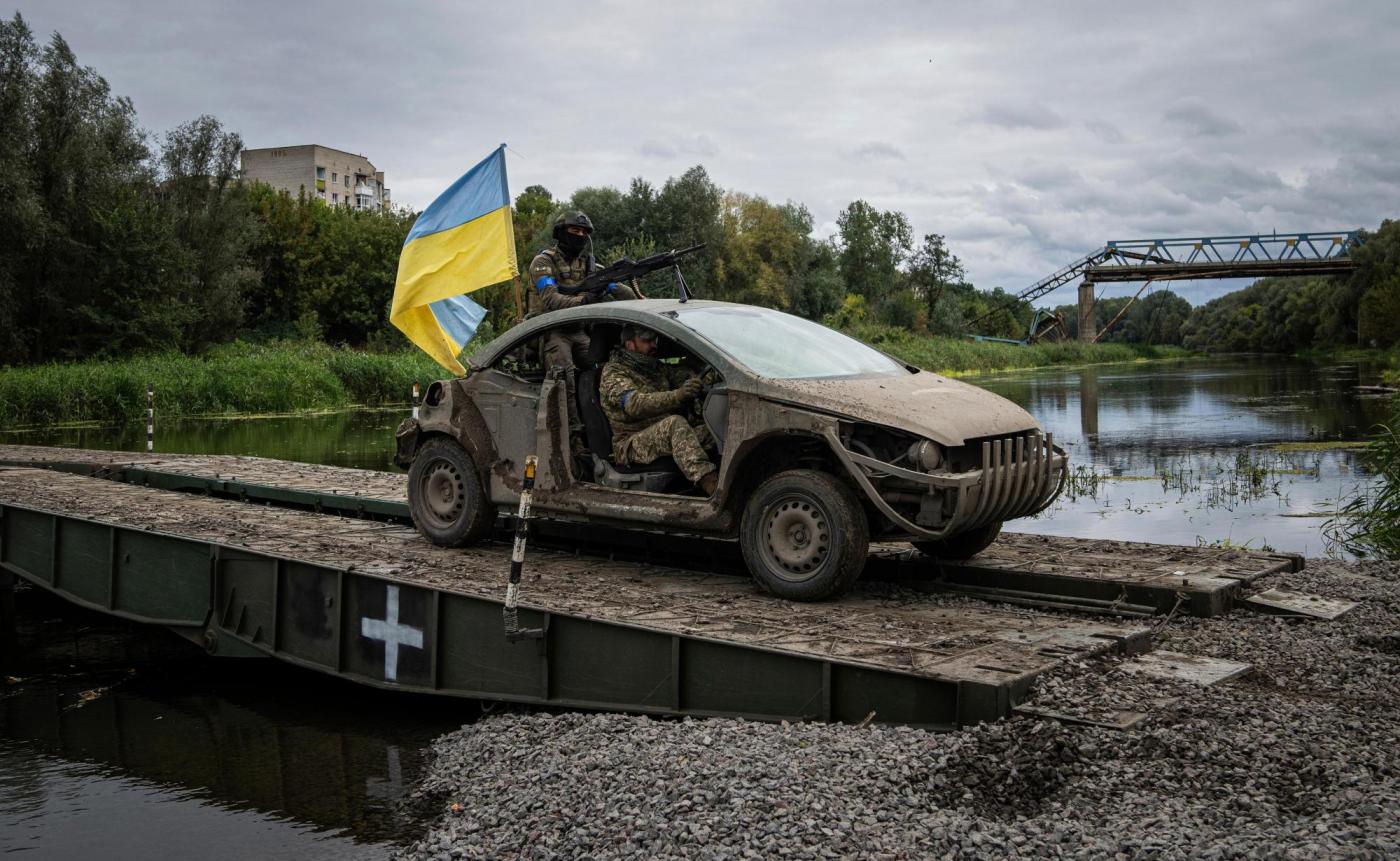 IZIUM, Ukraine (AP) — Investigators searching through a mass burial site in Ukraine have found evidence that some of the dead were tortured, including bodies with broken limbs and ropes around their necks, Ukrainian President Volodymr Zelenskyy said Friday.

The site near Izium, recently recaptured from Russian forces, appears to be one of the largest discovered in Ukraine.

Zelenskyy spoke in a video he rushed out just hours after the exhumations began, apparently to underscore the gravity of the discovery. He said more than 440 graves have been found at the site but that the number of victims isn’t yet known.

Digging in the rain, workers hauled body after body out of the sandy soil in a misty pine forest near Izium. Protected by head-to-toe suits and rubber gloves, they gently felt through the decomposing remains of the victims’ clothing, seemingly looking for identifying items.

Associated Press journalists who visited the site saw graves marked with simple wooden crosses. Some of the markers bore people’s names and had flowers hanging from them.

Before digging, investigators with metal detectors scanned the site for explosives, and soldiers strung red and white plastic tape between the trees.

Zelenskyy said hundreds of civilian adults and children, as well as soldiers, had been found near Izium’s Pishchanske cemetery after being tortured, shot or killed by artillery shelling.

He cited evidence of atrocities, such as a body with a rope around its neck and broken arms. In another sign of possible torture, one man was found with his hands tied, according to Serhiy Bohdan, the head of Kharikiv police investigations, and Ukraine’s commissioner for human rights, Dmytro Lubinets.

Ukrainian authorities warned that their investigation was just beginning, and the scale of the killings could rise dramatically.

“The harsh reality indicates that the number of dead in Izium may be many times higher than the Bucha tragedy,” Oleg Kotenko, an official with the Ukrainian ministry tasked with reintegrating occupied territories, said on Telegram.

Bucha is a Kyiv suburb where authorities have said 458 bodies were found after a 33-day Russian occupation. Authorities say they have uncovered the bodies of more than 1,300 people elsewhere, many in mass graves in the Kyiv-area forest.

Zelenskyy, who visited the Izium area Wednesday, said the discoveries showed again the need for world leaders to declare Russia a state sponsor of terrorism.

Meanwhile, in his first public comments on Ukraine’s recent battlefield gains, Russian President Vladimir Putin vowed to press on with the war and warned that Moscow could ramp up its strikes on the country’s vital infrastructure if Ukrainian forces target facilities in Russia.

“If the situation develops this way, our response will be more serious,” Putin told reporters Friday after attending a summit of the Shanghai Cooperation Organization in Uzbekistan.

Russia has reported numerous explosions and fires at civilian infrastructure sites near Ukraine, as well munitions depots and other facilities. Ukraine has claimed responsibility for some of the attacks and refrained from commenting on others.

“We aren’t in a rush,” he said, adding that Russia has only deployed volunteer soldiers to fight in Ukraine.

Some hard-line Russian politicians and military bloggers have lamented manpower shortages and urged the Kremlin to follow Ukraine’s example and order broad mobilization to beef up the ranks.

Ukrainian forces gained access to the site near Izium after recapturing the northeastern city and much of the wider Kharkiv region in a lighting advance that suddenly shifted the momentum in the nearly seven-month war. Ukrainian officials also found evidence of torture elsewhere in the region.

The U.N. human rights office said it would investigate, and the human rights group Amnesty International said the discovery of the mass burial site confirmed “our darkest fears.”

“For every unlawful killing or other war crime, there must be justice and reparation for victims and their families and a fair trial and accountability for suspected perpetrators,” said Marie Struthers, the group’s director for Eastern Europe and Central Asia.

Most of the people buried at the site were believed to be civilians, but a marker on one mass grave said it contained the bodies of 17 Ukrainian soldiers.

Russian officials distanced themselves from responsibility for the site.

Elsewhere in Ukraine, the war continued to claim lives and wreak destruction.

— More killings targeting pro-Russian separatist officials were reported in areas under their control. Separatist authorities said a blast killed the prosecutor-general and his deputy of the self-proclaimed republic in the Luhansk region. Moscow-backed authorities said two Russian-installed officials were also killed in Berdyansk, a city in the Zaporizhzhia region occupied earlier in the war. And local authorities reported three people were killed in a Ukrainian missile strike on an administrative building in Russian-occupied Kherson.

— To bolster the Ukrainian offensive, the Biden administration announced another $600 million package of military aid.

Izium resident Sergei Gorodko said that among the hundreds buried in individual graves were dozens of adults and children killed in a Russian airstrike on an apartment building, some of whom he pulled out of rubble “with my own hands.”

Izium was a key supply hub for Russian forces until they withdrew in recent days. Izium city council member Maksym Strelnikov told reporters that hundreds of people had died during the fighting and after Russia seized the town in March. Many couldn’t be properly buried, he said.

His claims could not be immediately verified, but similar scenes have played out in other cities Russian forces captured, including Mariupol.

Ukraine’s national police chief, Ihor Klymenko, said “torture chambers” have been found in the Kharkiv region’s recaptured towns and villages. The claim could not be independently verified.

Seven Sri Lankan students who fell into Russian hands in Kupiansk, also in the Kharkiv region, have also said that they were held and mistreated, he said.

“They are scared, they were abused,” Klymenko said. They include “a woman who can barely speak” and two people with torn toe nails.

This story has been updated to correct that seven, not six, Sri Lankan students said they fell into Russian hands.