Todays Though > News > Cape Cod bridges circa June 1935; fixing them could cost $4B
News

Cape Cod bridges circa June 1935; fixing them could cost $4B 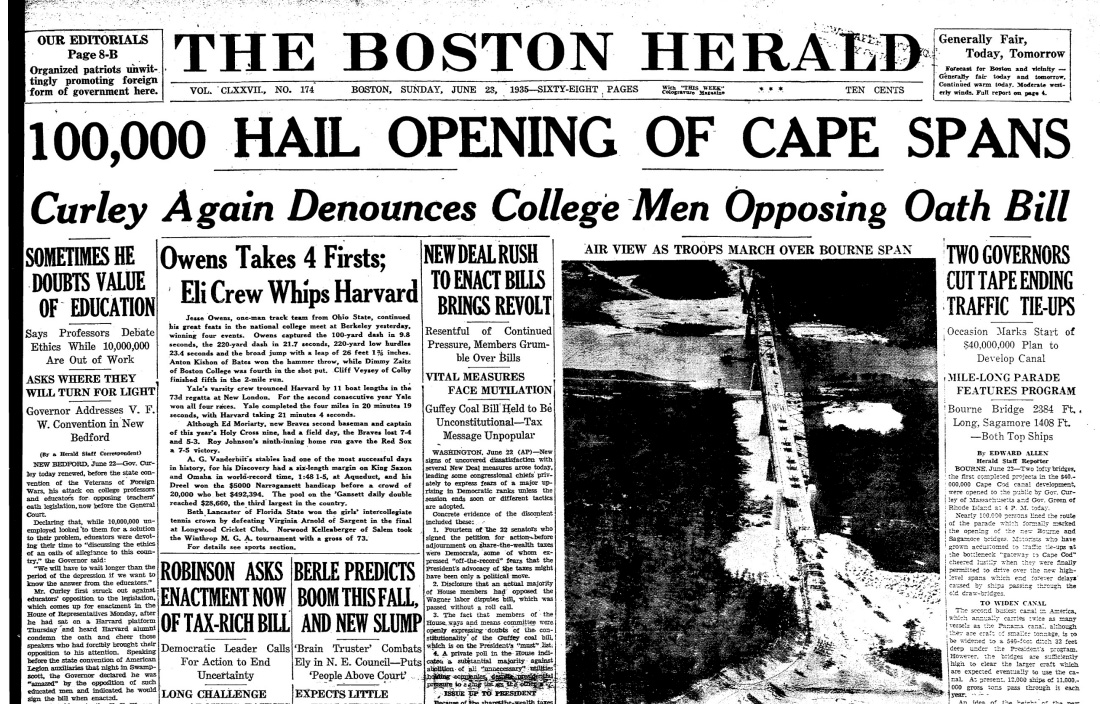 This front page jumped out while scrolling through the Herald archives.

With July Fourth just days away, the Bourne and Sagamore bridges will be packed with lines stretching back miles. Heading to the Cape real early or real late will help you avoid the backups. (There’s that timing theme again.)

Now the state is looking to fix the aging Cape bridges and reading this old front page tells why.

“Nearly 100,000 persons lined the route of the parade which formally marked the opening of the Bourne and Sagamore bridges,” the Herald wrote.

Going over the bridges you can see the ocean and immediately smell the salt air. The temperature drops a few degrees and so does your blood pressure. There’s just something magical about crossing over to a land of fried clams, sand everywhere and the eternal rolling of the waves.

But snapping back to reality, it was recently reported that fixing the twin Cape bridges could more than double in price to $4 billion.

A 2019 projection that it would cost $1.4 billion to $1.65 billion to demolish and replace the Bourne and Sagamore bridges — which the Baker administration expects will be fully paid by the federal government — has been driven up by inflation and a changing construction outlook, the State House News reported.

Transportation Secretary Jamey Tesler added the Baker administration and U.S. Army Corps of Engineers, which today owns and manages the bridges, expect the price will “likely be in the range of possibilities from close to $3 billion to close to $4 billion,” the news service added.

Judging by the hoopla surrounding the inaugural opening of the Cape Bridges, fixing them could bring thousands of happy motorists back to boost the economy.

My “From the Archives” deadline has hit, so I’m setting this story free and we keep hunting for the next installment. Have a safe Fourth!