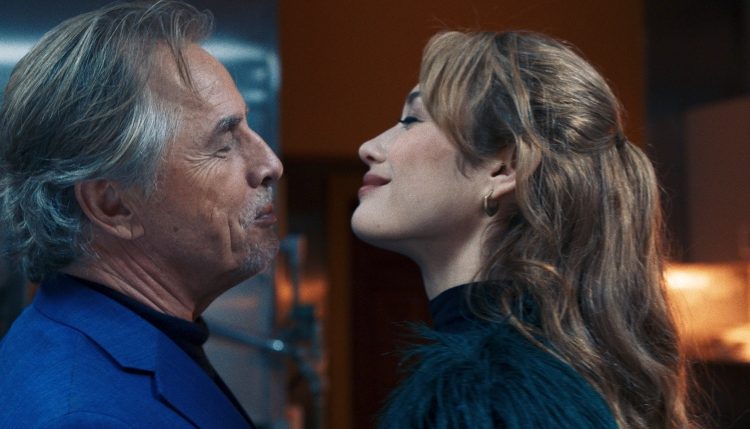 Rated R. On Digital, VOD and at the Gloucester Cinema.

Olga Kurylenko and Don Johnson, who have appeared in such high-end efforts as “Quantum of Solace” (2008) in Kurylenko’s case and “Knives Out” (2019) in Johnson’s, demonstrate the fine art of making inferior material look better than it is in the B-movie “High Heat.” The film begins in a stainless steel kitchen where Ana (Kurylenko) whose name is pronounced Anna or Anya, depending on who’s talking, is owner and head chef on opening night. Her handsome, notably older husband Ray (Johnson) is out front, charming the customers. Soon, it becomes apparent that Ray is in debt to a gangster named Dom (former wrestler Dallas Page, “The Devil’s Rejects”), who has sent his hapless son Mickey (Ivan Martin) to torch the restaurant to collect the insurance and pay off Ray’s debt.

The restaurant is named Etoile Rouge aka Red Star in honor of Ana’s Russian homeland. We will also learn that Ana is “former KGB,” like Vladimir Putin, and that she, unlike Putin, can still kick butt. In fact, Ana is suspiciously like the Geena Davis character in the influential, Shane Black-scripted “The Long Kiss Goodnight” (1996), a film that has spawned dozens of copycats.

As it turns out, Ana has a “particular set of skills,” and she keeps an automatic weapon in a box with her potatoes. Before long, the dead bodies of bad guys are piling up in her restaurant’s walk-in freezer. Mickey calls for back-up, including his father’s masseuse Gary (Jackie Long, shouldering a seriously retro role). Finally, a team armed with assault rifles is called in. They have “overtime rules.”

“High Heat” is the sort of film in which characters pour gasoline all over a kitchen’s floor, and we are then invited to forget about it and move on. Directed by Zach Golden (“The Escape of Prisoner 614”) and written by first-timer James Pedersen, ”High Heat” boasts a derivative story-line, one-note, stereotypical thugs and two locations, the restaurant and a nearby parking facility. Ana eventually places a call to estranged, former BFF Mimi (Kaitlin Doubleday), who appears to be a middle-class wife and mother. But she, her husband Tom (Chris Diamantopoulos, “Red Notice”) and their twin daughters (Bianca D’Ambrosio and Chiara D’Ambrosio) are much more dangerous than they appear. Again, the quality of the performances of these actors pushes “High Heat” above its pay grade. Apparently, the filmmakers could only afford one black Cadillac Escalade. A la “The Sopranos,” Ana and Ray make jokes about a shrink and couple therapist they have shared. Tom may be the only sniper I have ever seen who likes to stand in the light. Despite the fact that she is under siege, Ana also likes to keep the lights on. “High Heat” is a lot like the classier, more entertaining 2021 Gerard Butler effort “Copshop.” Do Kurylenko, Johnson and costars make “High Heat” worth seeking out? Not really, but they certainly make it a lot less painful.