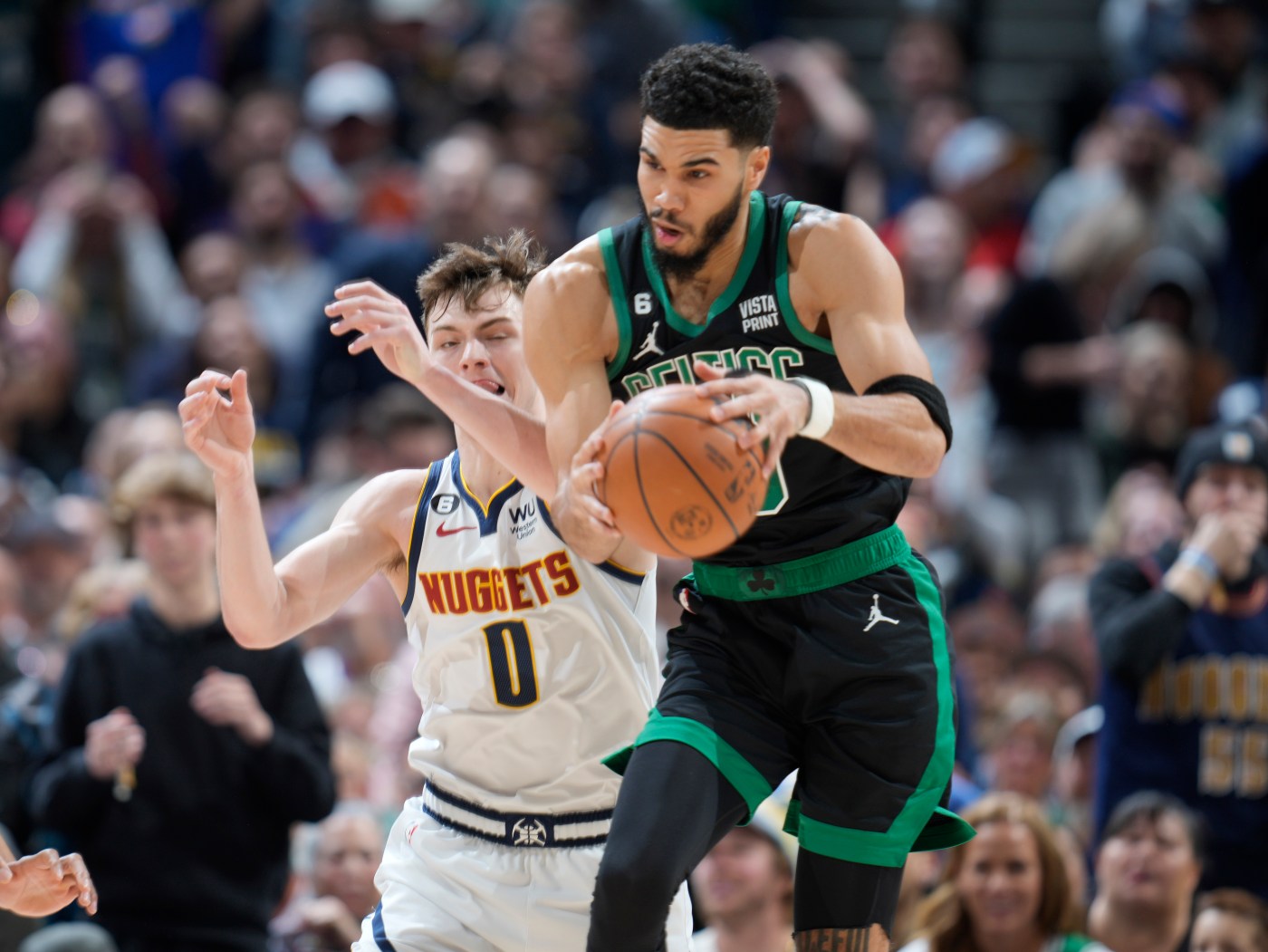 As the Celtics trended toward another poor shooting performance, a bizarre scene unfolded Sunday night in Denver.

Midway through the fourth quarter, Robert Williams flushed an alley-oop, hung on the hoop for a moment, and set the rim askew. A few minutes later, workers at Ball Arena began trying to fix the rim and make it level again. They ultimately needed to take off the rim and install a new one.

When the 40-minute, unprecedented delay finally neared its end, players went through warmups as if they were about to start a new game.

But not even a new rim or fresh start could change the Celtics’ fortunes and ultimate fate.

As the Celtics turned the calendar to a new year, the same problems that followed them for the majority of December followed. The Celtics went cold from long range again, and unlike their strong end to last week’s homestand, they couldn’t overcome it in a 123-111 loss, their first defeat to the Nuggets since 2019.

Jaylen Brown scored 30 points and Jayson Tatum had 25 points, but neither of them were a match for reigning MVP Nikola Jokic, who posted another triple-double with 30 points, 12 rebounds and 12 assists and had plenty of help from his teammates. Bruce Brown scored 21 and Bones Hyland was a thorn in the Celtics’ side with 17 as the Nuggets shot 17-for-30 from deep. The C’s went 9-for-33 from long range.

Though they hung around for most of the night after a slow start, the Celtics’ cold shooting coupled with the Nuggets’ torrid second-half stretch ultimately buried them. Hyland hit back-to-back triples early in the fourth that pushed Denver’s lead to 18 as the hosts went on an 11-for-15 stretch from deep in the second half.

The C’s trailed by 13 when the game went into its lengthy delay, but when play resumed, they couldn’t cut it closer than 10.

Other takeaways and notes from Sunday’s loss:

– The Celtics committed the ultimate sin when playing the NuggetsL They couldn’t take advantage of Jokic being off the floor. The Nuggets led by 10 when Jokic left the game late in the first, but fell behind further while the reigning MVP sat on the bench.

The C’s cut it to five early in the second quarter, but an unfortunate call began a deflating stretch. Robert Williams was called for a questionable goaltending call on a dunk. The Nuggets proceeded to go on a 9-2 run, and they led by 15 when Jokic returned midway through the period as the Celtics struggled to shoot from deep.

But the C’s responded and won the minutes with Jokic on the floor to end the half, fueled by strong defense. They trailed by 13 going into the final two minutes before the lineup of Tatum, Brown, Smart, Horford and Robert Williams cut the deficit to as small as six inside the final minute and eight going into the half – a minor miracle after the Celtics shot 3-for-19 from 3 to start the game.

– The Celtics’ halftime deficit would have been much larger without Brown, who got off to a hot start. He scored 12 of the Celtics’ first 14 points and 14 in the first period on 5-for-6 shooting. The rest of the Celtics shot 5-for-18 in the opening quarter, including Tatum who had just one point on three missed shots as he started slow.

– Tatum was fouled hard on his left wrist by Jokic on a play in the third quarter. He seemed to be in some discomfort as he held on to his wrist for a few moments – which was already wrapped – but he stayed in the game.

– Joe Mazzulla returned to the Celtics sidelines after missing their wins over the Rockets and Clippers this week. The interim head coach suffered corneal abrasions in both of his eyes after what he described as a “freak accident” while playing a game of pickup basketball last Tuesday.