Todays Though > News > Celtics’ Jayson Tatum reacts to another poor performance vs. Warriors: ‘Got to be better’
News

Celtics’ Jayson Tatum reacts to another poor performance vs. Warriors: ‘Got to be better’ 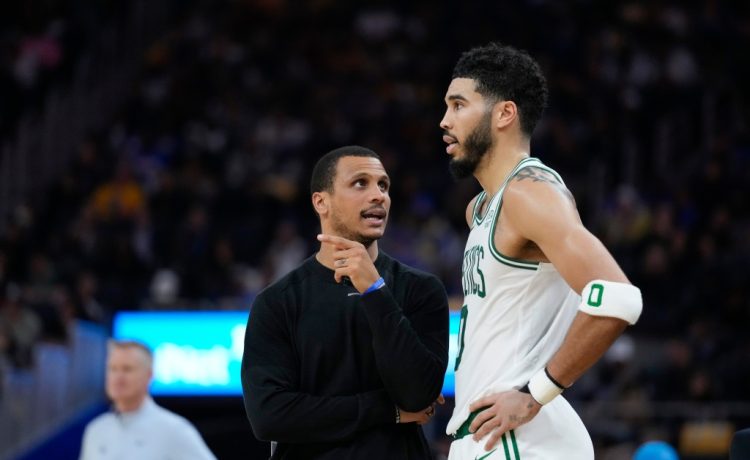 SAN FRANCISCO — On one sequence late in the fourth quarter, the Celtics trailing by double digits, Jayson Tatum found himself wide open for a 3-pointer. It clanked off the back of the rim. Following his own miss, Tatum grabbed the long rebound, made one dribble to his left and rose for a layup over Draymond Green.

It went off the backboard, and grazed off the rim for another miss. Tatum put his head down as he jogged back on defense, with the clock ticking down under three minutes to go of the Celtics’ inevitable loss to the Warriors on Saturday night.

It was that kind of night for Tatum, a fitting end for one of his worst performances of the season. The Celtics star has been playing at an MVP-level for much of the year, but in Saturday night’s NBA FInals rematch, he had a case of deja vu. For one game, Tatum regressed back to his form reminiscent of June’s Finals, when he couldn’t get it done on the biggest stage.

“I’ve just got to be better,” Tatum said. “I missed a lot of layups, missed some open threes, things like that. Nobody to blame but myself. I’ve got to be better to help the team.”

Tatum’s night was painfully familiar. In last season’s NBA Finals, he didn’t perform his best – capped by a woeful 13-point effort in the Celtics’ Game 6 loss that clinched the Warriors’ championship. That defeat fueled a drive to get back to the Finals and a motivation to get over the hump this season, which he has shown as an MVP frontrunner for the league-leading Celtics.

But on a rare night in San Francisco, against the same team that gave him fits six months ago, Tatum looked mortal again. It happens to the best – especially when facing a dynasty on its home floor – but it proved as yet another reminder for Tatum and the Celtics that they’re not untouchable, and their star still has room to grow.

Though the game was treated from the outside as more than one of 82 given that it was a Finals rematch, Tatum wasn’t overreacting to one bad performance.

“I think tonight was probably more meaningful to you guys than it was to us,” Tatum said. “It’s one game. We want to win every game we play but it’s tough. You never want to lose. We’ve been playing well and to lose this one, especially the way we played is tough, but it’s not going to dictate our season. We’ve had a great season so far and we lost the game. It’s all about how we respond.”

Still, it was notable that the Warriors once again found a way to disrupt him. It didn’t help Tatum that he picked up two fouls in the first five minutes of the game, and he never found the right rhythm from there. It was indicative of a team-wide performance as a league-leading offense finally had an off night. Tatum’s performance represented it. He missed layups. He missed open 3s. The Warriors, all night, made him comfortable.

Even in the midst of an MVP campaign to start this season, Tatum has had some off nights. But while the nature of Saturday’s performance – with the national spotlight back on and underperforming again in the rematch – will create more attention, Tatum isn’t treating it any differently than one of his typical monster efforts. No sense in getting worked up over a game in December, even if it felt like more than a regular game.

“I’m a big believer in great games, bad games, it’s over with,” Tatum said. “There’s nothing I can do about what just happened but get some rest, watch some film and get ready for Monday. That’s just as honest as I can be.”