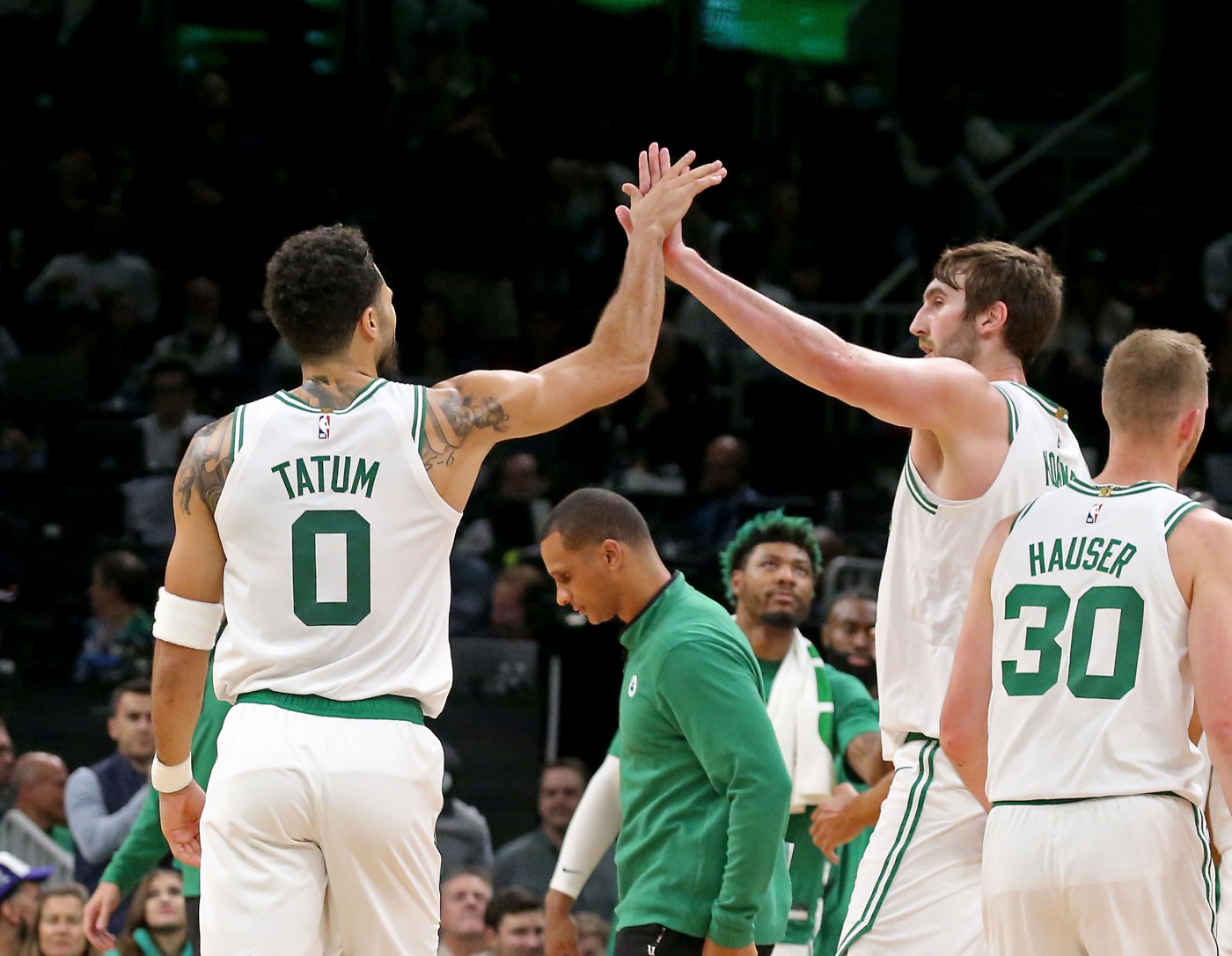 The way it unfolded didn’t sit right for a team with championship aspirations. Their bench didn’t get the job done, and they knew it. Emotions got the best of them, resulting in two ejections. Their defense was woeful in a blowout defeat to the Bulls.

But given a quick chance to vindicate themselves, the Celtics didn’t let it go to waste.

Revenge week didn’t go totally to plan for the Celtics, who fell to an upstart Cavaliers team in overtime. But a bounce-back win over the Bulls showed the C’s have picked themselves up well off the mat and are responding to some early lessons that a championship team should.

Jayson Tatum scored 36 points, overcoming some shooting struggles early and emerging clutch late, as the Celtics fended off the Bulls and earned a tough 123-119 victory at TD Garden. The Celtics overcame a monster performance from Bulls star DeMar Derozan, who poured in 46 points, to get back in the win column as they came through in crunch time, which had eluded them in the early going.

Joe Mazzulla, after a rough defensive showing to start the season, has liked the way the Celtics’ defense has played over the last week and that showed itself early in the fourth. Leading by six entering the final period, the Celtics held the Bulls scoreless over the first four minutes as they built a 13-point lead on Grant Williams’ dunk.

But led by Derozan, the Bulls kept charging, and made things uncomfortable for the C’s in the closing minutes. Derozan made a pair of free throws to cut Boston’s lead to two with 1:24 to go, but the Celtics responded with counter-punches down the stretch. Jaylen Brown found Derrick White for a clutch 3 to restore the lead to five with 1:07 remaining. Nikola Vucevic replied with a triple of his own, but the C’s didn’t fade.

An early flaw to begin the season, the Celtics’ improved rebounding came up big when they needed it. When Al Horford missed a 3 on the ensuing possession, Marcus Smart kept the ball alive before Tatum came down with it. He made one of his two free throw attempts to make it a three-point game before the Celtics forced a stop. Tatum stole the ball and turned it over, but Patrick Williams missed a 3, allowing the Celtics to seal it.

Tatum came down with the rebound – his 12th of the night – and made both free throws that helped seal the game. Despite shooting just 8-for-23 shooting, Tatum went 17-for-20 from the free throw line as he set a career-high in attempts at the stripe.

He got some help with a big lift from the bench, led by Malcolm Brogdon’s 25 points.

When the Celtics were blown out by the Bulls in Chicago last month, Brogdon took responsibility. The C’s starters opened up a big first-quarter lead only for the bench to blow it, and the Bulls used that momentum to race away with a victory. Brogdon, the leader of the Celtics’ second unit, used that as a teaching point for the rest of his bench mates to put in a better effort and not slip up going forward.

On Friday, they got some redemption against the Bulls. Trailing by eight late in the first quarter, the Celtics’ second unit – featuring Brogdon, Williams, Tatum, Sam Hauser, Luke Kornet – were responsible for getting them back in the game. Led by Brogdon, who was aggressive in finding his shot, the C’s went on a 16-5 into the second quarter and took the lead when Brogdon found Tatum for a triple.

The two teams stayed even the rest of the half before the C’s starters built a six-point halftime lead. It wouldn’t have been possible without their bench play, led by Brogdon’s 14 first-half points on 6-for-7 shooting.