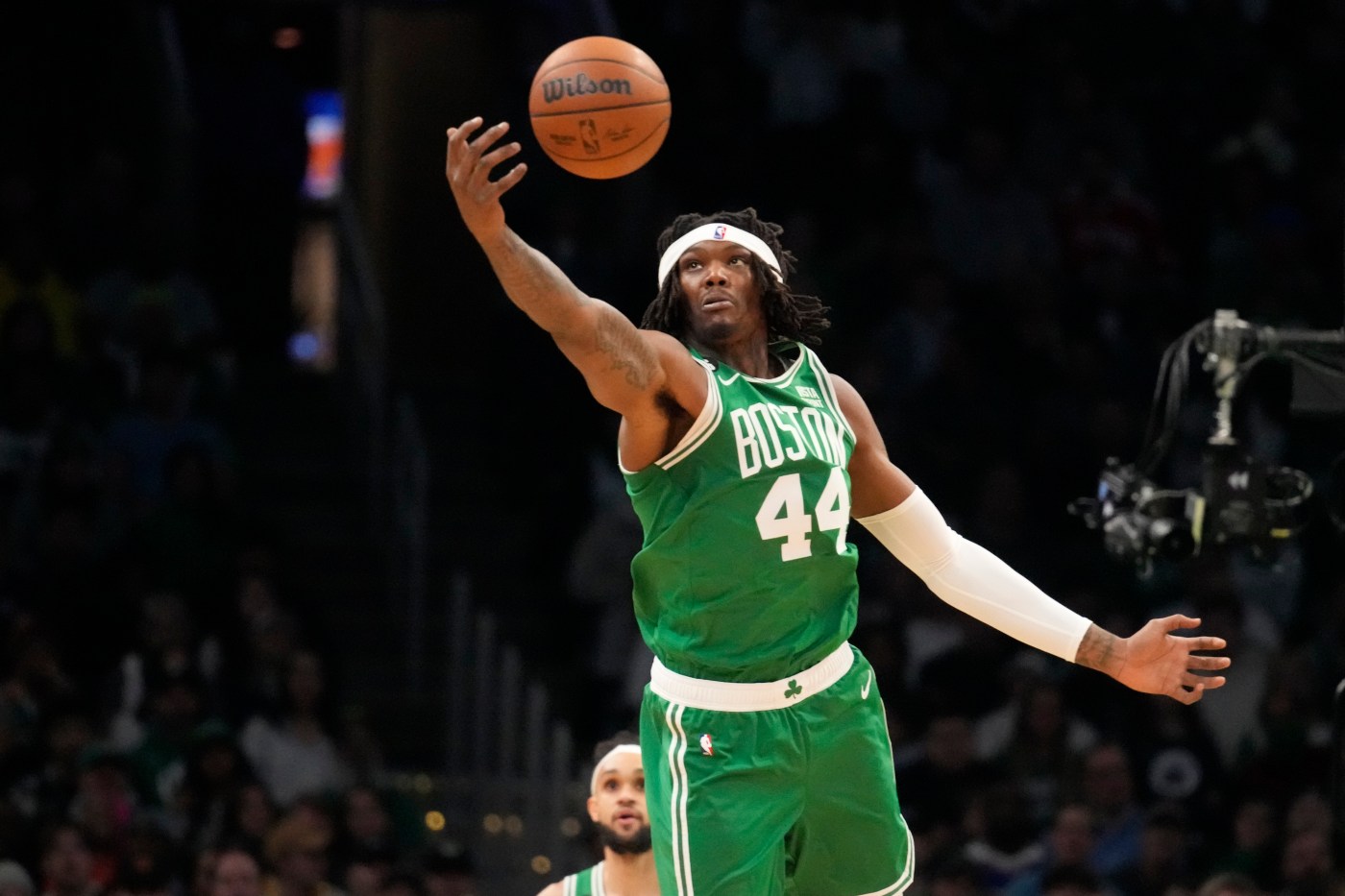 Rob Williams had just made a highlight-reel play, but the Celtics center didn’t seem to expect it.

Late in the second quarter of the Celtics’ eventual victory over the Spurs on Saturday night, Williams forced his teammates to jump out of their seats. Spurs rookie Malaki Branham’s 3-point attempt at the top of the key was blocked by Williams, who soared with ease to swat the shot away with his right hand. The ball landed in the backcourt, where Williams beat Branham to it. In one motion, he took a dribble, made two steps and laid the ball in.

ROB WITH THE BLOCK AND THE FINISH 🔥 pic.twitter.com/xOnZIwXzfW

“I’m really surprised he shot the ball, man,” Williams told reporters in San Antonio. “Most people, they know I’m coming to block that. He won’t try it again, for sure.”

If the rest of the league wasn’t aware yet, Williams reminded them that he’s back.

It’s been nearly one month since Williams returned from left knee surgery that kept him out from the Celtics’ first 29 games of the season. He’s played in nine games, all off the bench, and hasn’t played more than 22 minutes in one game. But his performance on Saturday strongly suggests he’s ready for more, and not just because of that one play.

Williams was a force on both ends and especially a monster defensively in Saturday’s win. He had 11 points as he continued to be a threat above the rim. He’s missed just six shots since he returned. He came down with 11 rebounds. He added three assists as a willing and effective passer for his talented teammates. And on defense, he finished with four blocks while altering countless more shots and deterring several Spurs from challenging him.

Williams has, more often than not, been extremely impactful since he came back, an energy booster and game-changer for the Celtics on both ends like he was during last season’s run to the NBA Finals. Most of all, he looks fully healthy. That second-quarter play on Saturday showed he isn’t holding anything back. So why isn’t he playing more?

Jayson Tatum seems to be wondering the same thing. When Williams was subbed out early in the fourth quarter on Saturday, he posed a question to the center.

Celtics assistant coach Damon Stoudamire – when he took over briefly for interim head coach Joe Mazzulla last week – indicated that Williams is playing on a minutes restriction as he continues to build his stamina and work towards full comfort on the floor. The Celtics are, understandably, managing one of their most important players carefully, knowing bigger games are ahead.

But eventually, presumably, Williams will take the next step in his return, get an increase in playing time and rejoin the starting lineup. There’s a strong case for it to happen now.

“Whether he starts or comes off the bench, I just want him on the floor, I want him healthy and I want to be on the floor with him at the same time as much as possible,” Tatum told reporters. “I’m gonna start, so I would like Rob to start but whatever’s best for the team, he’ll do that. As much as I can be on the court with him as possible, I think makes us better.”

Williams has said all the right things, and put the team first, since his return. He’s embracing any role he’s asked. But it sounds, and looks, like he’s ready for more.

“I’m here for whatever,” Williams said. “Obviously they’re trying to be careful and make smart decisions. When the guys are out there rolling, they’re rolling. Whether it’s 12 (minutes) or 30, I’m here. …

Dating back to last season – when he led the NBA in defensive rating – Williams’ impact has been undeniable. Bringing him off the bench has had its benefits, but his impact is maximized as part of the starting lineup alongside Tatum, Jaylen Brown, Marcus Smart and Al Horford – the group that led them to last season’s Finals.

Mazzulla said Saturday that one thing the Celtics need to work on is their late-game execution with their double-big lineup that includes Williams and Horford. The Celtics have slowly worked Williams back into that unit, and it’s clear they want to play that five-man group more often. Sliding Williams back into the starting lineup seems like the next logical, natural step.

One way or another, the ‘Timelord’ looks like he’ll be getting more time soon. As his spectacular highlight on Saturday showed, there’s no one quite like him.

“Rob is special,” Tatum said. “There’s not many people in the league that can do the things he can do, affect the game the way that he can. As his stamina gets better and just plays more games, he’s going to make more plays like that, and we’re going to be a better team because of that.”