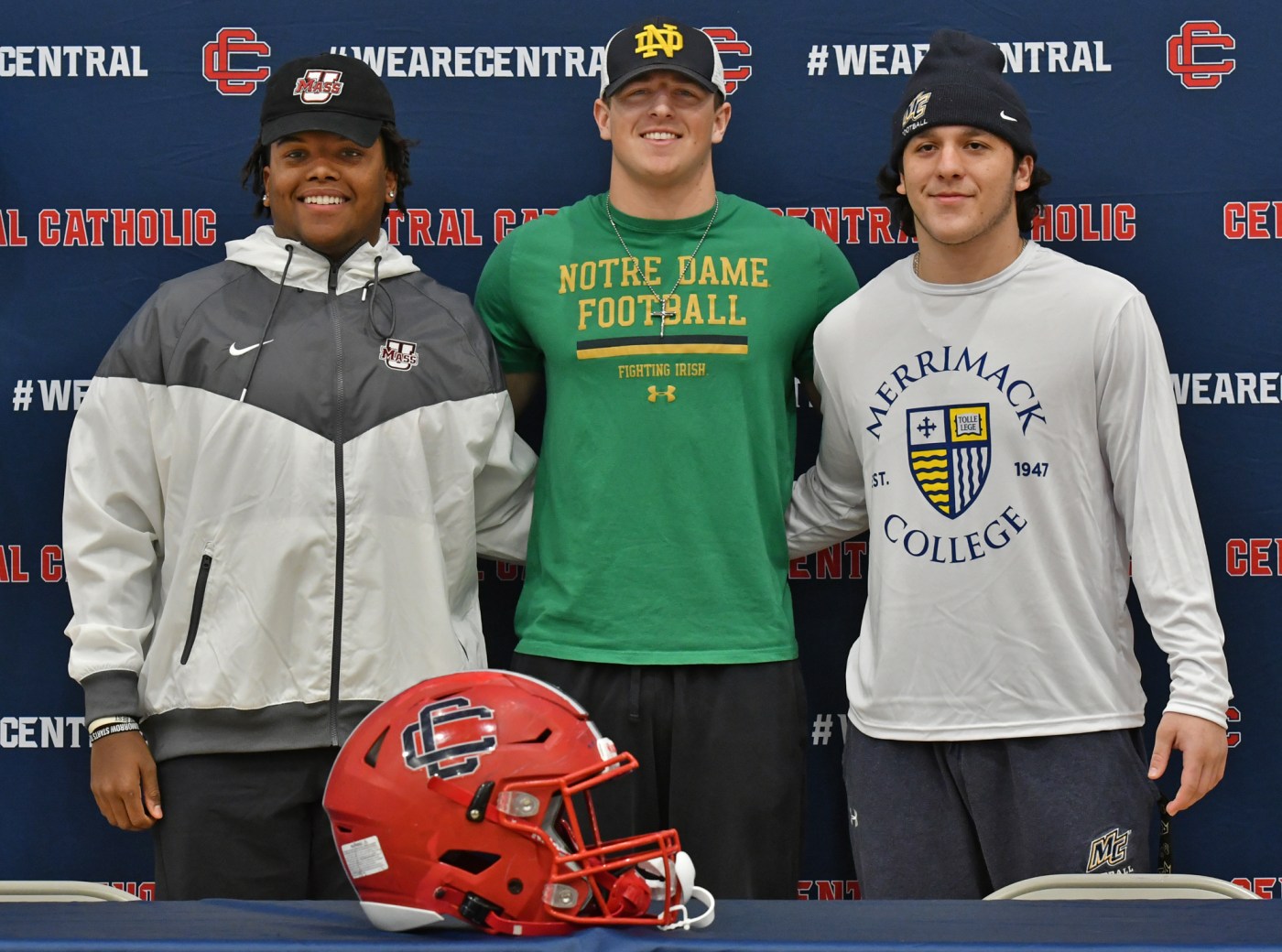 Central Catholic had plenty of reason to celebrate on Wednesday.

In front of friends, family and members of the Central Catholic football staff and administration, the trio of Preston Zinter, Sean Mercuri and Jaden Wiggins signed their National Letters of Intent to play college football. The ceremony took place inside Central Catholic’s Memorial Gymnasium in Lawrence.

Zinter, Mercuri and Wiggins have been standouts for the Raiders, including leading them to a Division 1 Super Bowl appearance in 2021. Zinter is headed to Notre Dame, where he will enroll in January. The three-star recruit, according to 247Sports, is expecting to be a full participant in the Irish’s offseason strength and conditioning and football activities.

“Central Catholic immediately felt like home to me,” Zinter said. “The coaches, the teammates, the fans all made me feel welcome and wanted. It’s just a place that will always be special in my heart.”

Mercuri announced on Tuesday that he is headed to Merrimack College and on Wednesday made it official. Wiggins, the son of former New England Patriots tight end Jermaine Wiggins, is off to UMass to play for Don Brown.

Fresh off leading St. John’s Prep to the Div. 1 state title, two of its stars are heading to the big time. Joenel Aguero signed with defending national champion Georgia, while Jesse Ofurie will play at Rutgers.

Two of the more high profile players in the ISL will be heading to the ACC. Thayer Academy lineman Samson Okunlola signed with Miami, while BB&N’s Ronan Hanafin is off to Clemson. Another highly touted recruit out of the ISL, Milton Academy’s Andrew Rappleyea, signed with Penn State.

UConn was able to land Toriyan Johnson of Proctor Academy and Tucker McDonald of Wachusett. Seekonk lineman Josh Troiano, the MVP of the SCC, will play at Stonehill, while Taunton’s Nathan LaPlante committed to Bryant. Former Durfee star Jason Hall, now at Suffield, signed with Villanova.