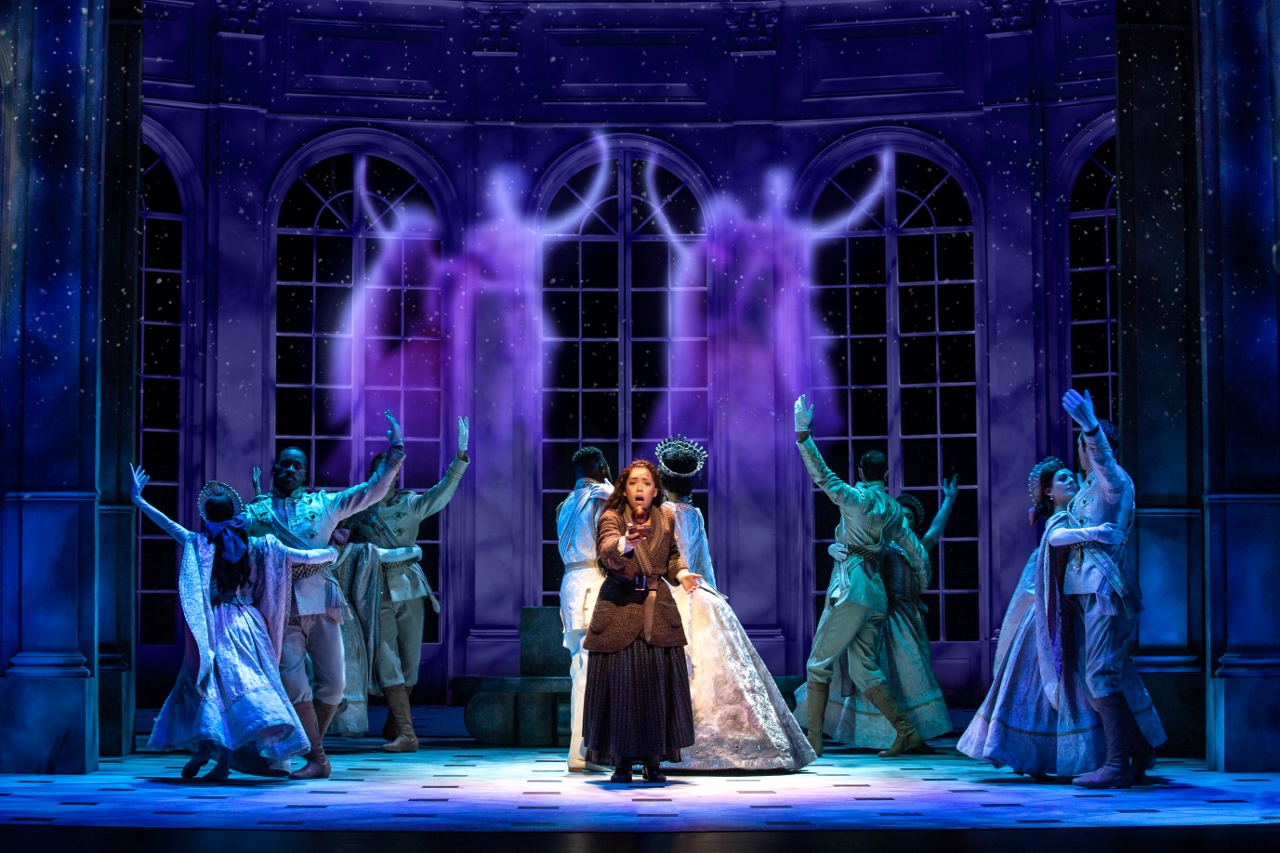 A revolution is a simple thing.

Bolshevik general Gleb Vaganov sings this phrase both early and late in the musical “Anastasia.” The first time, the sentiment is earnest. The final time, it is sardonic.

Because a revolution is an enormously complex thing. And when “Anastasia” chews on the realities of the Russian revolution — a horrific end to a horrific aristocracy that led to a horrific dictatorship — it can cough and sputter. When it relaxes into a love story, the eternal food of classic Broadway, it can be quite enchanting.

“Anastasia,” which runs through Aug. 28 at Citizens Bank Opera House, follows Anya (Kyla Stone), an orphan with amnesia, as she looks to uncover if she really is the Grand Duchess Anastasia Nikolaevna, heir to the throne of Russia. On a journey from Leningrad to Paris in 1927, she is hunted by Gleb, who is tasked with crushing the myth that Anastasia survived the Bolsheviks’ assassination of the tsar and his family. With echoes of Cosette’s rise out of poverty (Anya’s even got the besom broom) and Javert’s blind quest for justice, Anya’s effort to escape Gleb (Brandon Delgado) recalls “Les Misérables.”

But “Anastasia” leans more toward Disney than Victor Hugo so the enchanting bits come when Anya strikes up an unlikely relationship with Dmitry (Sam McLellan). A fellow orphan, Dmitry has cooked up a scheme with phony count Vlad (Bryan Seastrom) to transform Anya into Anastasia and collect a reward from her grandmother, the deposed Dowager Empress Maria Feodorovna living in Paris.

Like a classic MGM musical or Rodgers & Hammerstein blockbuster, “Anastasia” succeeds when it doesn’t try to do too much. As Anya, Kyla Stone crashed into her bold, blustery ballads with enormous force — and she gets plenty of them to belt out (“In My Dreams,” “Once Upon a December,” “Crossing a Bridge”). As Dmitry, McLellan nicely evolved from rogue to romantic as he and Anya slowly let down their guard and trust one another.

The cast as a whole comes together for a few remarkable moments. In a show with little that’s unexpected, the ensemble’s voices blended perfectly for the haunting, harmonically magical “Stay, I Pray You.” In a show that devotes a fat chunk of time to its leads’ starry-eyed show pieces, it rightly adds some spectacle — the ensemble turns Russian exiles into Parisian flappers in big Broadway number “Land of Yesterday” and wonderfully channels the Bolshoi Ballet for an excerpt of “Swan Lake” that hosts a key plot point.

Revolutions are complex, but a Broadway musical can be a simple thing. Those searching for simple musicals have struggled to find much recently. The landscape has come to be dominated by heady, messy, intricate stuff: “Hamilton,” “Hadestown,” “Fun Home,” “Dear Evan Hanson.” (Or maddeningly blunt stuff: Do we need Jimmy Buffett’s “Escape to Margaritaville”?).

“Anastasia” offers up a throwback production. Yes, it evokes a little Disney vibe. But it also relishes in recalling the plucky allure of those Rodgers & Hammerstein blockbusters. If you can ignore the entanglements that come with staging a play about aristocrats and dictators in 2022, “Anastasia” will charm you. Certainly, the ecstatic audience at Wednesday’s performance had no problem focusing only on the fairy tale enchantment.

For tickets and details, go to boston.broadway.com.