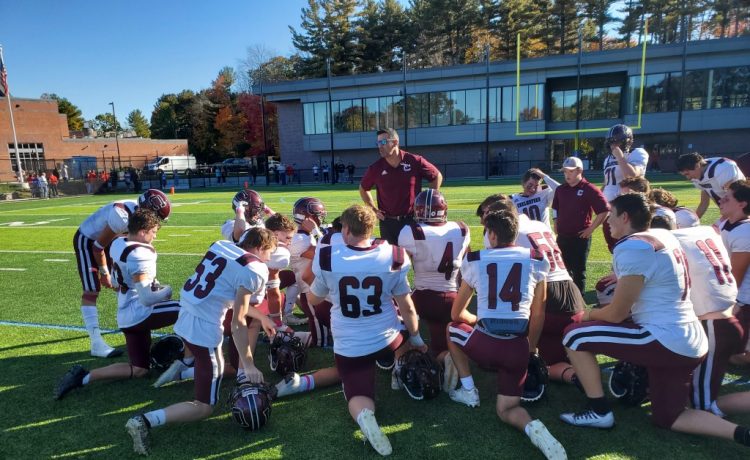 TEWKSBURY – After losing their season-opening game, the Chelmsford Lions have roared past every opponent, dominating on both sides of the ball. For the most part on a gorgeous Saturday afternoon that was the case against Tewksbury, which also entered the Merrimack Valley Conference game with a 4-1 record.

Led by quarterback Kyle Wilder, who completed 15-of-23 passes for 255 yards, including four touchdown passes, the Lions improved to 5-1 with a 39-21 victory over the Redmen before a large crowd at Doucette Field.

The offensive juggernaut started right away for the Lions. After forcing the Redmen to punt on their first possession, on the first play from scrimmage, Wilder connected over the middle to Grant Engelhardt for a 69-yard pass.

“We always talk about a fast start and it’s one of the things that we address every day in practice is starting fast and finishing,” said Lions’ head coach George Peterson. “This is certainly the fastest start that we’ve gotten off to with this initial play. We saw the way that they were lining to trips on film and we took advantage of it. It was something that we had practiced all week and we were able to hit it, so it was a big play from our quarterback and receiver.”

The Lions continued to dominate the first quarter with two more touchdowns. The first came on a 49-yard run by Malakai Everett (12 carries, 75 yards) followed with a 12-yard TD reception by John McCarthy and the Lions had a 19-0 lead.

“We have been explosive on the offensive side of the ball. I think we took advantage of some opportunities early on in the game. It was frustrating that we weren’t able to slam the door in the second half and take care of business the way that we had hoped to. We had turnovers, costly penalties and stupid stuff that led to them being able to fight and claw their way back into the game,” said Peterson. “We talked about it all week that Tewksbury is probably the toughest team you’re going to face as far as their mental toughness. They are never going to give in or let down. They are going to give a full four quarters and that was one hundred percent true today. Kudos to them and their kids for coming back the way that they did and I think we have to get better at taking care of the football and get better at not committing costly penalties.”

Everett added his second touchdown on a 1-yard run before Tewksbury’s Alex Arbogast took a sweep to the right 57 yards and the Lions led 26-7 at halftime.

Ryan Blagg (4 catches, 91 yards) caught a 29-yard pass from Wilder with 6:34 left in the third and that was followed by two touchdowns by the Redmen, a 44-yard pass from Vincent Ciancio to Sean Hirtle and then Ciancio connected with Michael Sullivan from 17 yards out to cut the deficit to 32-21. That was as close as the Redmen got, as Blagg closed it out with his second score on a 28-yard pass from Wilder, who was excellent from start to finish.

“(Wilder) had a great day for us. He’s a kid who the past few weeks we haven’t had to rely on to throw the ball as much as he did today. They were cramming the box with seven and eight guys at times, so we have to make it work from our quarterback and receiver position. We have some great receivers and Kyle has done a great job of preparing himself and was able to make some great throws,” said Peterson.

Besides Wilder’s 255 yards, the Lions also rushed for 166 yards as part of their 421 yards of offense. For Tewksbury, Cianco finished completing 12-of-27 for 166 yards, and on the ground Arbogast had 15 carries for 115 yards.

“That’s a good team. We missed on a few things even in the first half. We could have kept that tighter going into (the halftime break),” said Redmen coach Brian Aylward. “We had a couple of our guys lose their composure a little bit and you just have to fight through that stuff. It’s a learning process. We’re playing against a lot of veteran teams and we have guys who are not really veterans. They have a tough task of facing teams that have a lot of varsity experience under their belt, while some of them have no varsity experience under their belt, but that’s the nature of the beast. We are transitioning to a lot of new guys so we need to play pretty much perfect ball to beat the real good teams.”