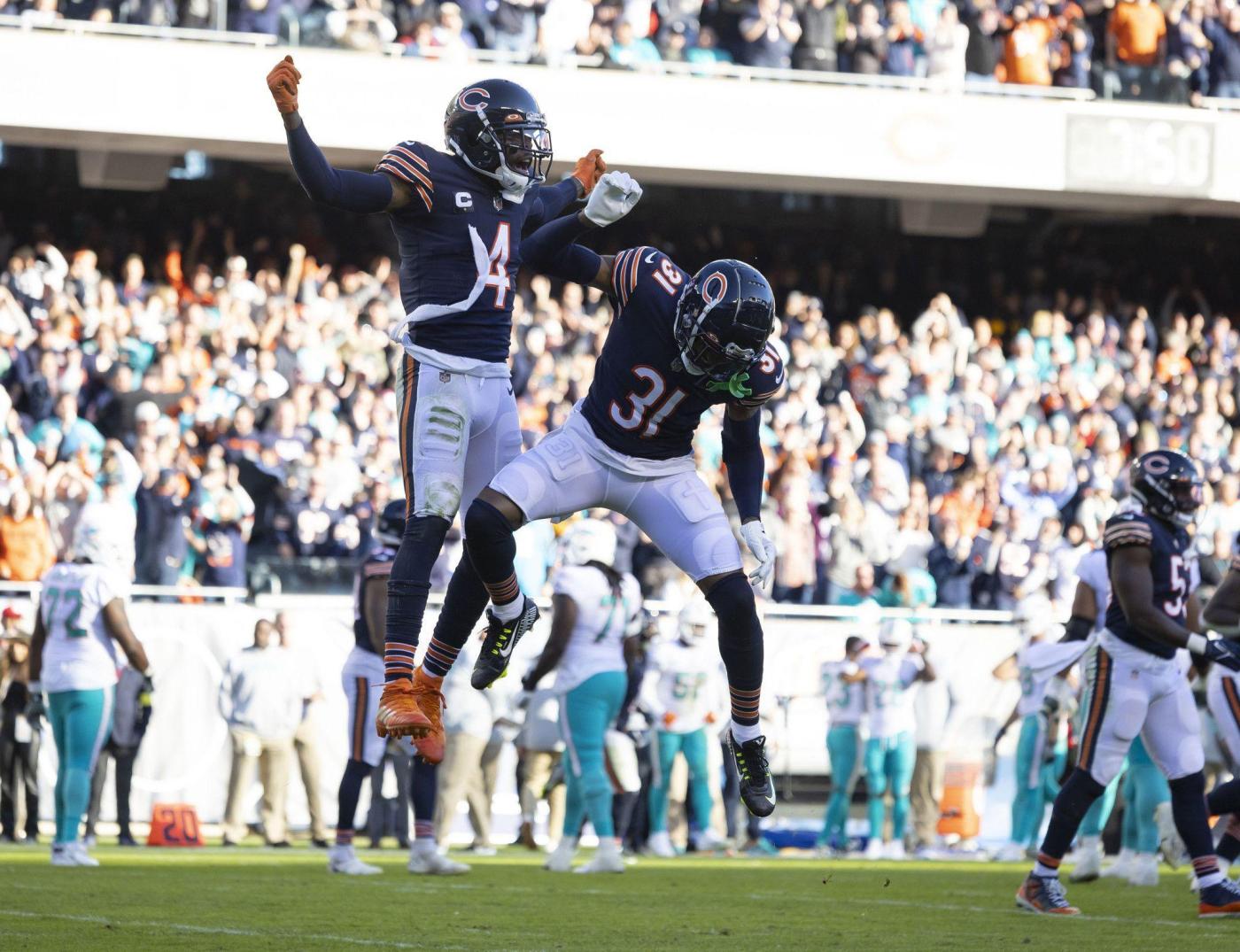 After Miami Dolphins wide receiver Tyreek Hill caught a 3-yard pass from Tua Tagovailoa early in the second quarter Sunday, Hill sprinted across the Soldier Field end zone and launched himself into the air for his trademark celebratory theatrics.

Roundoff, backflip — and a lead the Dolphins didn’t give up again in a 35-32 victory over the Chicago Bears.

A Bears defense that saw two of its best players dealt at the NFL trade deadline knew the challenge it faced against Hill and Jaylen Waddle, two of the league’s top five in receiving yards.

The Bears’ only stop through the first 42 minutes came courtesy of Dolphins kicker Jason Sanders missing a 29-yard field goal wide left. When the defense finally put together three late stops, the Bears offense couldn’t come through with the winning drive.

“They did a good job, especially using some pick routes, things like that,” Johnson said. “It makes it harder guarding somebody already extremely fast, and now you have rub routes, guys picking each other. They did a good job there.

“We’ve just got to do a better job to execute, and I have to give myself a better chance and find a way to know those pick routes are coming and do a better job defending those. But they pose a lot of speed and they did a really good job running across the field, giving guys a lot of hard downs.”

Tagovailoa completed 21 of 30 passes for 302 yards and three touchdowns for a 135.7 passer rating. The Bears didn’t record a sack or force a turnover.

“We need to do a better job against those guys of jamming and disrupting at the line of scrimmage,” coach Matt Eberflus said. “I didn’t think we did a very good job of that, and also getting guys up underneath them the way we had planned during the course of the week.”

Understanding the missed opportunity made the early struggles more frustrating.

Safety Eddie Jackson has been around Chicago long enough to know offensive performances like the ones the Bears and quarterback Justin Fields have put together the last few weeks need to be capitalized on, and he said that was the talk on the sideline as the defense tried to regroup.

“The offense as a whole coming out there and continuing to give us 30 points, that’s something we’ve been asking for,” Jackson said. “And we can’t allow teams to score 28 or 35 points on us as a defense. We’ve got to give them guys some help.

“That was our message on the sideline. Like, ‘Bro, we’ve got to help the O. … They’re doing everything they can, and we just keep coming up short, so we’ve got to get this fixed.’”

The Bears eventually came up with stops on three consecutive drives after the Dolphins pulled ahead 35-25 in the third quarter, with safety Jaquan Brisker saying the defense was “more aggressive and more locked in.”

The Dolphins went for it on fourth-and-6 at the Bears 35-yard line late in the third quarter, but Tagovailoa’s pass to Mike Gesicki with safety DeAndre Houston-Carson on him was wide.

They went for it again on fourth-and-1 at the Bears 14 midway through the fourth quarter, but Tagovailoa’s low pass to Durham Smythe fell incomplete. That stop came after Jackson was called for a 47-yard pass interference penalty while defending Waddle.

It was the Bears’ second pass interference penalty, the first on cornerback Kindle Vildor while defending Hill in the end zone on the Dolphins’ first drive. That one, which ended with Vildor getting hurt, ended up more costly. It gave the Dolphins 32 yards, and they scored on the next play.

The Bears overcame Jackson’s penalty to make the stop, though the Dolphins ate up more time on the clock and the Bears took over deep in their territory.

“(The official) said he didn’t see me playing the ball,” Jackson said. “I didn’t look at a receiver one time, so I don’t know what he saw, but I was playing the ball the whole time. Even guys on the Dolphins sideline told me that was a horrible call.”

The final stop came courtesy of Johnson when he broke up Tagovailoa’s pass to Waddle on third-and-11 with 2 minutes, 55 seconds to play.

“It was me and Waddle by ourselves,” Johnson said. “I really just tried to contain him the best way I can. He gave me a hard stick inside, cut back outside and then he had two steps on me. But really just keeping my composure, seeing that the ball was short through his body language and then just putting my hands up where I thought the ball was coming and I made a good play.”

Johnson always talks about welcoming the challenge to match up with the game’s best wide receivers, and this week was no different. But he didn’t walk away from Soldier Field satisfied.

“I would definitely say not good enough,” Johnson said. “I feel like I didn’t impact the game the way I wanted to. There definitely are some things I would want back, but at the end of the day, I’m always going to keep fighting.”

The performance came in the wake of the Bears trading team captains Robert Quinn and Roquan Smith in a six-day span. Undrafted rookie Jack Sanborn made his first start at middle linebacker, while the Bears moved Nicholas Morrow from the middle to Smith’s spot at weak-side linebacker.

For the second straight week, Jackson didn’t use it as an excuse for the defense.

“You don’t really think about those type of things,” Jackson said. “We’re out with the players we’ve got. Put our trust in the guys we’ve got on the field and just try to adjust different things.

“The young guys in there have to step up. It’s hard, big shoes to fill. But we’ve got to step up, we’ve got to prepare well and we have to execute no matter who is on the field.”