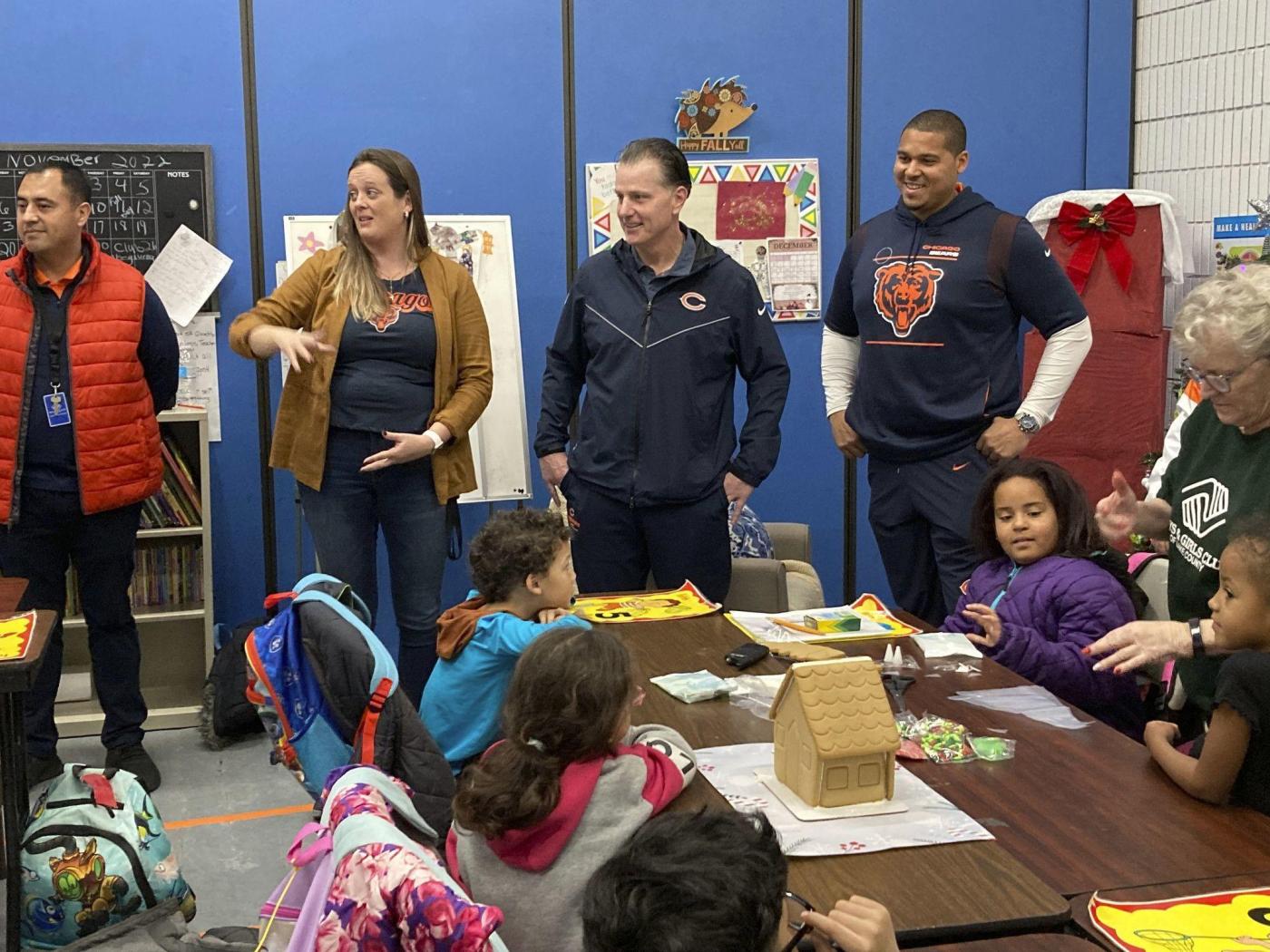 The schooling was not about catching a pass or making a tackle. Eberflus helped Amando learn how to fill a pastry sack so they could decorate a gingerbread house.

Bears general manager Ryan Poles and Eberflus visited the Boys & Girls Clubs of Lake County Tuesday in Waukegan, joining the youngsters in some of their activities and answering questions, while offering a message of pursuing dreams and treating everyone with respect.

As Amando was attempting to fill a pastry sack with frosting to decorate one of the gingerbread houses, Eberflus knelt beside him showing him how to do it.

“He helped me really well,” the boy said.

Not only does Eberflus coach professional football players, but said he is familiar with creating gingerbread houses. It is something he has done at his home with his own children around holiday time.

“You develop a plan, and go with the system,” Eberflus said, when asked about coaching the young pastry chefs. “If you do that, you’re going to do a good job. They know how to do a good job.”

Gianna Hicks, a Carman-Buckner Elementary School second grader in Waukegan, was getting some help on a gingerbread house from Poles. He, too, was filing pastry sacks so the children could decorate with frosting. Hicks liked the outside mentoring.

“It was good to see some of the Bears,” Gianna said.

Sharlett James, the club’s site coordinator, said representatives of the Bears contacted the club about the visit as a way to help make an impact on young people in the community. She said it is important for children to hear positive messages from people in leadership roles.

While few local youngsters reach the National Football League, James said there are important messages people like Poles and Eberflus can offer, like trying as hard as they can in school and not losing sight of their dreams.

While talking to a group of teens later in the afternoon, Poles said after playing college football at Boston College, he was not good enough to play in the National Football League. He chose front office work as a player personnel assistant with the Kansas City Chiefs.

“I learned about the process, and we got to the Super Bowl a couple of times,” Poles said. “I will see people underperforming. Then they start performing well, and eventually they become leaders.”

Eberflus told the teens his job is helping people. He said he helps the assistant coaches who work for him and the players. He said he is developing a culture where the Bears can evolve and thrive. He knows there will be obstacles to overcome.

“Life is a big adventure, and it can be exhausting,” Eberflus said. “You always have to expect things. You always have to treat everyone with respect. You have to be mentally ready, and take one issue at a time.”

Eberflus was asked how he works with a player who drops a pass or misses a tackle. He said besides a lot of practice so it becomes routine, he tells players to think to themselves about how to do something correctly.

“You should talk to yourself,” Eberflus said “No one talks to you more than you. Tell yourself you can do it better, and you will do it better.”

“Don’t give up,” Wade, who plays football for the high school, said. “Keep on trying.”