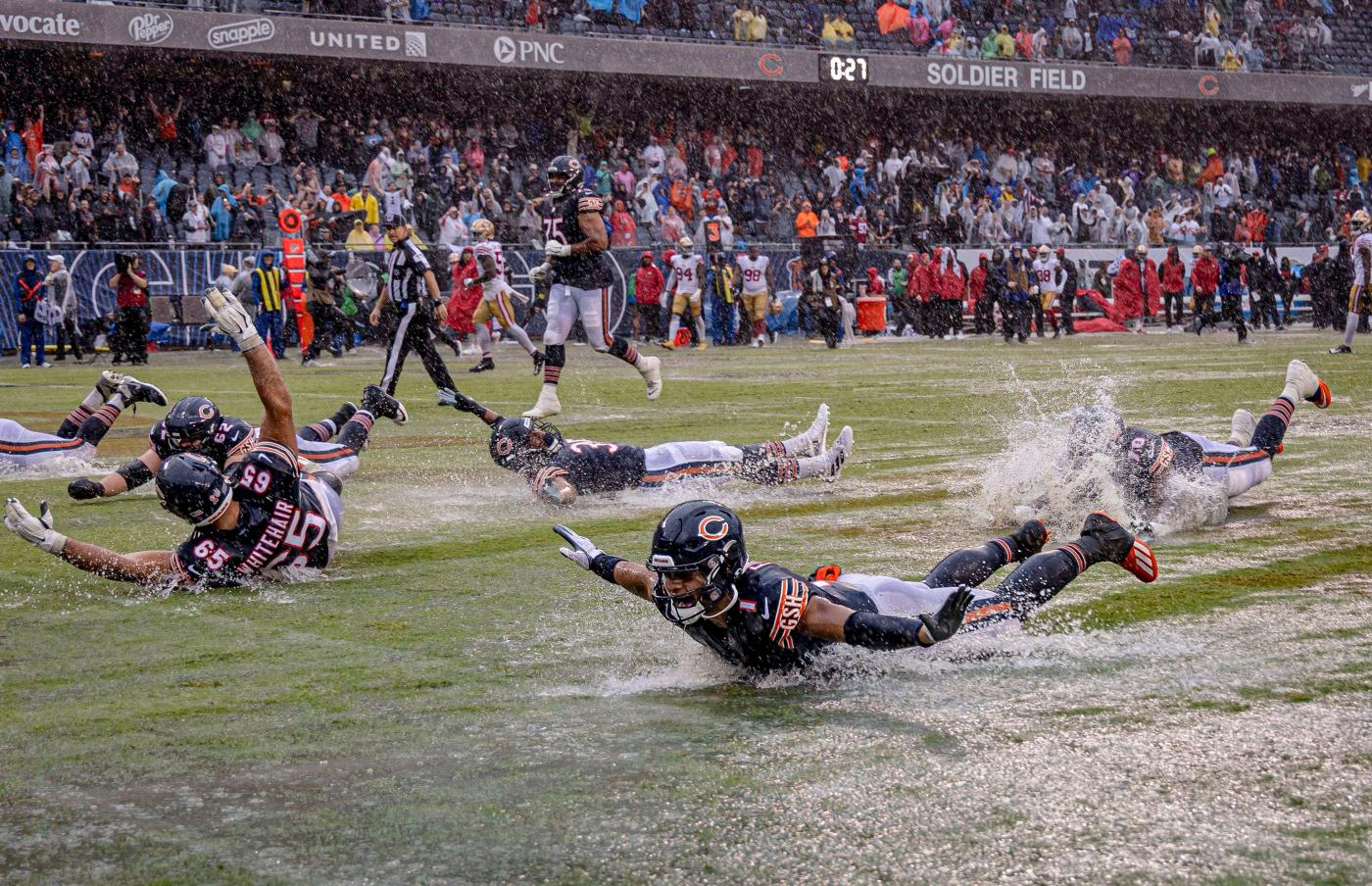 The Bears defense forced Detroit to punt just once in the first half as the Lions lead 24-10 at halftime.

Fields rushed for 113 yards, including a 60-yard run on their second drive. But Fields was sacked five times for a loss of 26 yards, and the Bears had just seven net passing yards.

The Bears took a 7-0 lead on their opening drive on Fields’ 13-yard touchdown pass to a wide-open Cole Kmet. Fields kept the drive alive with a 31-yard run on third-and-1 from the Bears 48.

The Lions hit back with Goff’s 2-yard touchdown pass to Brock Wright. The Lions got into scoring position when Bears cornerback Kyler Gordon was called for pass interference against D.J. Chark in the end zone on fourth-and-4 from the 35. It was a 34-yard penalty.

Fields broke for a 60-yard run on the next drive, but the Bears settled for Cairo Santos’ 23-yard field goal.

The Lions took a 14-10 lead on D’Andre Swift’s 17-yard touchdown run early in the second quarter. Goff had a 28-yard pass to Chark on the drive.

The Lions extended their lead to 21-10 on Goff’s 9-yard touchdown pass to Wright and then got the ball back three plays later on a Fields fumble. Fields scrambled for 3 yards, but defensive lineman James Houston punched the ball out from behind and Aidan Hutchinson recovered it.

Michael Badgley hit a 23-yard field goal late in the second quarter for a 24-10 lead.

Velus Jones Jr. had a 63-yard kickoff return to get the Bears to the Detroit 45-yard line with seven seconds to play in the half. But Fields threw an interception to Hutchinson to end the half.

Right guard Teven Jenkins left the game on the Bears’ first drive with a neck injury. It was Jenkins’ first game back since being carted off with a neck injury against the Philadelphia Eagles. He was listed as doubtful to return later in the first quarter.

Backup right guard Michael Schofield left with a knee injury in the second quarter and was replaced by Dieter Eiselen.

Cornerback Jaylon Jones left to be evaluated for a concussion.

The Bears offense will be healthier than it has been in weeks Sunday against the Lions.

The Bears search for a new team president is progressing with Big Ten Commissioner Kevin Warren emerging as one of the organization’s top candidates, according to ESPN.

Warren became Big Ten commissioner in 2020 after a 14-year stint as an executive in the Minnesota Vikings front office. He was the Vikings chief operating officer from 2015-19 and before that served as the executive vice president of legal affairs and chief administrative officer.

He was integral in the Vikings’ efforts to build a new stadium with the team opening U.S. Bank Stadium in 2016. As the Bears pursue a potential new stadium venture in northwest suburban Arlington Heights, Warren’s expertise and experience in a similar process would prove valuable.