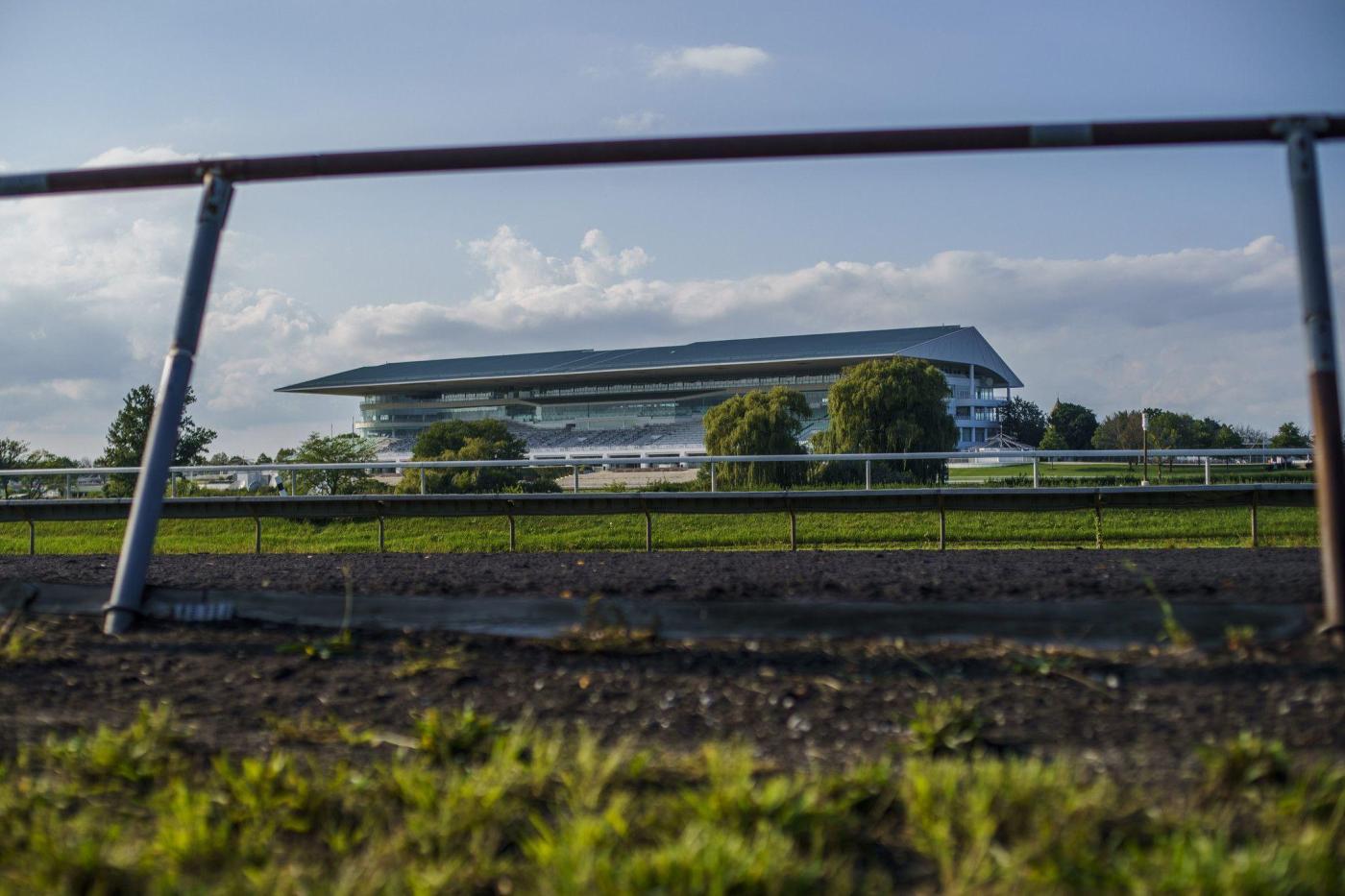 The Chicago Bears generated keen interest from fans and non-fans alike Thursday for a presentation of plans for a new domed stadium and entertainment district in Arlington Heights.

Team officials drew applause when they said the stadium would be enclosed, and that the team would not negotiate renovations at Soldier Field while pursuing the Arlington deal.

Bears Chairman George Halas McCaskey noted that many members of the McCaskey family that own the team have lived in the northwest suburbs, including Arlington Heights.

“We want to be good neighbors,” McCaskey told the crowd. “We want what’s best for the community.”

The multibillion dollar project could take 10 years or more to complete, McCaskey said. He said the team would need government funding to help make the project become a reality.

“The Bears will seek no public funding for direct stadium structure construction,” he said. “However … we will need help.”

Without infrastructure support and “property tax certainty,” he said, “the project as described tonight will not be able to move forward.”

Bears President Ted Phillips promised a “first-class experience” for fans, and to incorporate public feedback into the plans.

Planning consultants described a Station Square with places to go before and after the game, with offices, retail, residential buildings and a hotel.

The residential buildings would likely be two to eight stories with apartments and townhomes.

Conceptual plans included a pond with a boat house for kayaking and canoeing, and “perhaps” a performance venue.

New entrances to the grounds would include off-ramps from Route 53 that would go under Northwest Highway to the stadium, and new entrances off Euclid Avenue.

The crowd seemed receptive to the plans, applauding at various points during the presentation.

The team plans to have more parking capacity than what’s currently available at Soldier Field, they said. They planned to expand capacity for another football necessity, too.

Brenda Zolott of Arlington Heights was taking notes at the back of the room.

“If I could snap my fingers and have it all materialize right now, I would. It’s giving me motivation to stay alive. If it happens soon enough, I might even be able to work in the retail section.”

When team leadership announced “there is no plan B” for a different property development, she applauded.

And when officials said there would be no casino on the site, the crowd cheered.

People lined up two hours ahead of time for the 7 p.m. meeting, and the crowd stretched around the building and out to the parking lot of John Hersey High School in the northwest suburb.

Before the meeting started, those attending raised concerns about property taxes, traffic, and preserving the racetrack on the site of Arlington International Racecourse.

A handful of political advocates worked the line, handing out pamphlets encouraging residents to get involved in efforts to prevent public money from going into the proposed redevelopment.

“Property taxes are my main concern,” said Justin Hegy, 37, of Palatine, who lives about a mile from the site, and wore a Bears shirt to the meeting. “Our property taxes keep going up every year.”

If taxes stayed the same, Hegy said, as a Bears fan, “I’d love it if they were in my backyard. I’ll ride my bike to the game.”

During the meeting, officials said property taxes should be significantly more than that generated by the racetrack.

Lisa Miller had taken time off of her job at Whole Foods to get in line before 5 p.m. She is a Palatine resident, but said she lives next to the racetrack and has fond memories of spending time there as a child growing up in Arlington Heights.

Miller told the Tribune she remembered watching and crying when the track burned down in 1985, and watching its reconstruction. She bought her house in part because it looked out onto the track, she said.

She said she wanted to see the Bears pay attention to parking and traffic in the neighborhood surrounding the site.

“I want kids to be able to walk in my neighborhood,” she said. “During any big huge racetrack events, that was not the case.”

She is opposed to public money funding the development, including the proposed entertainment district. But if the project moves ahead, she said she would want to see “local farm-to-table restaurants” and smaller community events, like a farmers’ market, at the facility once it was built.

Miller also said she wanted to see the Bears continue the tradition of having fireworks on July 4th.

“I bought my house, if I walk out to the end of my driveway, I could see the fireworks every Fourth of July,” she said. “And that would be really great if the Bears were to continue that tradition.”

Linda Gaio lives “a seven-minute walk” from the site. She said she’d heard a lot about how the proposal would increase the value of her home, but was skeptical. “My increased home value doesn’t mean anything unless I sell my house,” she said.

Gaio had two main questions for the Bears. One was how many of her tax dollars would fund the project.

“I want to know if this is going to cost us anything,” she said. She wanted to know “if they could give us some sort of documentation, or maybe there’s some website or something where we could check the progress of these talks and the negotiations and how it’s gonna affect us residents.”

Gaio’s second concern was whether the team planned to preserve any part of the existing facility.

She said it would be “the cherry on top — highly unlikely — if we could at least keep an element of the historic property, make it into a central arena or grandstand and make that into offices and all that stuff.”

Gerald Barrett, who owns Tugo Tea House in Arlington Heights, said he’s cautiously optimistic about the Bears’ arrival in the village because of the customers it could attract for businesses like his.

“What I’ve seen in the past in some cities, is that these sports centers are like year-round activity centers,” Barrett said. “There’s an opportunity for small businesses in the area to maybe work with the organization, and maybe have a concession year-round.”

He’s not sure about the idea of using taxpayer dollars to help the Bears redevelop the site, but wanted to see more detailed plans before making up his mind.

He said he’d want to see evidence that the redevelopment would benefit the community beyond creating jobs if he were going to support public money into the project.

The team said its “best-in-class” enclosed stadium will be worthy of hosting global events such as the Super Bowl, College Football Playoff and Final Four.

It’s all proposed for the 326-acre site of Arlington International Racecourse, which closed permanently to horse racing last year.In 2021, the Bears announced a purchase agreement to buy the park from Churchill Downs Inc. The team is vetting various aspects of the preliminary deal before anticipating closing late this year or early next year.

To make a move, the team would have to pay to break its lease at Soldier Field in Chicago. Mayor Lori Lightfoot has proposed topping the stadium with a $2 billion dome, but the Bears have said they are not negotiating with the city while the team is pursuing the Arlington deal.

The team’s announcement of its plans Tuesday included repeated warnings that the deal depends on meeting various requirements, such as, “If we do close on the property, it does not guarantee we will develop it.”

The Bears said they would not ask for public money to build the stadium but would seek taxpayer funding to help develop the mixed-use area.

The team projected, without yet providing documentation, that construction would have a $9 billion economic impact, with subsequent annual stimulus of 9,750 jobs and $1.4 billion annually.

Economists have frequently questioned such projections, warning that sports stadiums do not typically make a good return on investment for governmental bodies.

Americans for Prosperity-Illinois, part of a national libertarian group backed by the conservative Koch brothers, presented a petition to the village board Tuesday, seeking to prohibit public funding for the Bears or any other private development.

The group also released a poll that found a majority of Arlington Heights voters supported the Bears coming to their village but opposed using tax dollars for the move.

Arlington Heights Mayor Tom Hayes has said taxpayer contributions to the project would be a “last resort,” but has defended incentives such as tax increment financing, or TIFs. A TIF would use increases in property tax revenues on the racetrack site to help with the property’s development.

The meeting is merely informational and the plans are still vague. The village would still hold separate public hearings to consider any specific Bears proposal.

Julian Aguilar was outside the meeting working the line on behalf of Americans for Prosperity, a libertarian political advocacy group that’s organizing a petition to bar public money from going to any business entity looking to set up in Arlington Heights — including the Bears.

He said he’d had a “legit friendly debate” with several of the residents in line.

“There’s a lot of people who think we don’t want the Chicago Bears here,” he said. “Our big thing is just to make sure we protect Arlington Heights taxpayer dollars.”

Regardless, Aguilar said, “It’s going to have a long-term effect on the residents here.”

Check back for updates.