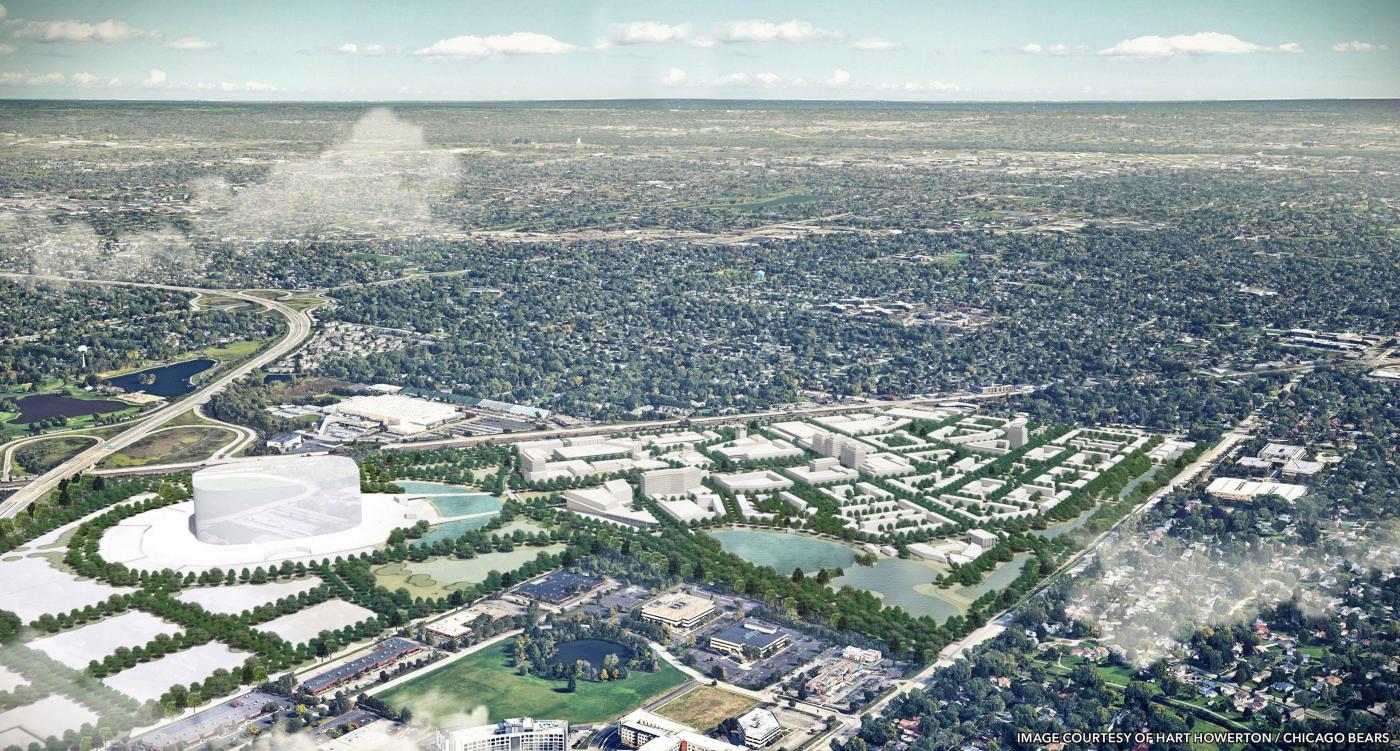 For the first time, the Chicago Bears confirmed Tuesday that the stadium the team is considering building in Arlington Heights would be domed — but the team also called for taxpayer funding of a portion of the project, and noted the plan was still tentative.

The Bears’ released illustrations of the proposed project, and a statement that was the most detailed yet on its proposal to buy Arlington International Racecourse. It said the stadium would be a “best-in-class enclosed stadium, providing Chicagoland with a new home worthy of hosting global events such as the Super Bowl, College Football Playoffs, and Final Four.”

The team estimated that construction of the proposed project would create 48,000 jobs, a $9.4 billion economic impact for Chicagoland, and $1.4 billion in annual economic impact. The team would not seek taxpayer help to build the stadium, but given the economic impact, would seek public funding for the rest of the project.

“We remain under contract to purchase the property, but there are conditions that must be met in order to be in a position to close,” the team wrote in the statement. “If we do close on the property, it does not guarantee we will develop it.”

The illustrations released Tuesday show a map that indicates that the stadium would be along Route 53 and the Metra commuter tracks. A mixed-used district would be southeast of the stadium.

Two other illustrations show aerial images of the complex, which would include several buildings along with the stadium.

The team has played at Soldier Field in Chicago for half a century, and pays about $6.5 million a year in rent. Its lease runs through 2033, but the team could break the lease for $84 million as of 2026. In July, Chicago Mayor Lori Lightfoot proposed options to build a dome over Soldier Field for $2.2 billion, without specifying how it would be paid.

In September of 2021, the Bears signed a preliminary agreement to buy the Arlington site from track owner Churchill Downs Inc., which shut down the racetrack last year.

“We remain under contract to purchase the property, but there are conditions that must be met if we are to be in a position to close,” the Bears stated, but did not specify those conditions.

“While under contract with the seller of Arlington Park, we will not be discussing or exploring any other alternative stadium sites or other opportunities, including renovations of Soldier Field,” the team stated.

The team projected that construction would generate $3.9 billion in labor income to workers, with more than 9,750 long-term jobs, and $601 million in annual worker income.

As for tax revenue, the Bears estimated the deal would generate $16 million annually for Arlington Heights, $9.8 million for Cook County and $51.3 million for the state of Illinois.

The team did not provide specifics on how such projections were made. Economists have questioned such “promotional” studies, finding that consumer spending on sports often simply replaces other types of entertainment spending.

Various studies have concluded that new sports facilities have a minimal effect on economic activity and employment, but haven’t addressed the impact of a multiuse district like what the Bears are proposing.

“We are taking serious steps to evaluate the opportunity presented to us,” the team said. “The Bears remain committed to Soldier Field and will honor the terms of its lease… there is much work to be done before we can close on the property, and then whether we will develop it.

“We look forward to working with key partners and stakeholders across the Chicagoland community and State of Illinois in the months ahead.”

The Bears did not make an ultimatum that they would require taxpayer funding to complete the deal, but hinted that might be necessary by repeatedly emphasizing that the deal depends on meeting unspecified conditions.

Tuesday night, the Arlington Heights village board was scheduled to consider approving a proposal by real estate development consultant Hunden Strategic Partners Inc., of Chicago, to perform an economic and market analysis of the redevelopment proposal. The board also was due to consider a bid by Sam Schwartz Consulting LLC, with an office in Chicago, for a traffic and parking study.

The Bears will hold a community meeting Thursday night at Hersey High School in Arlington Heights to talk about the plan.