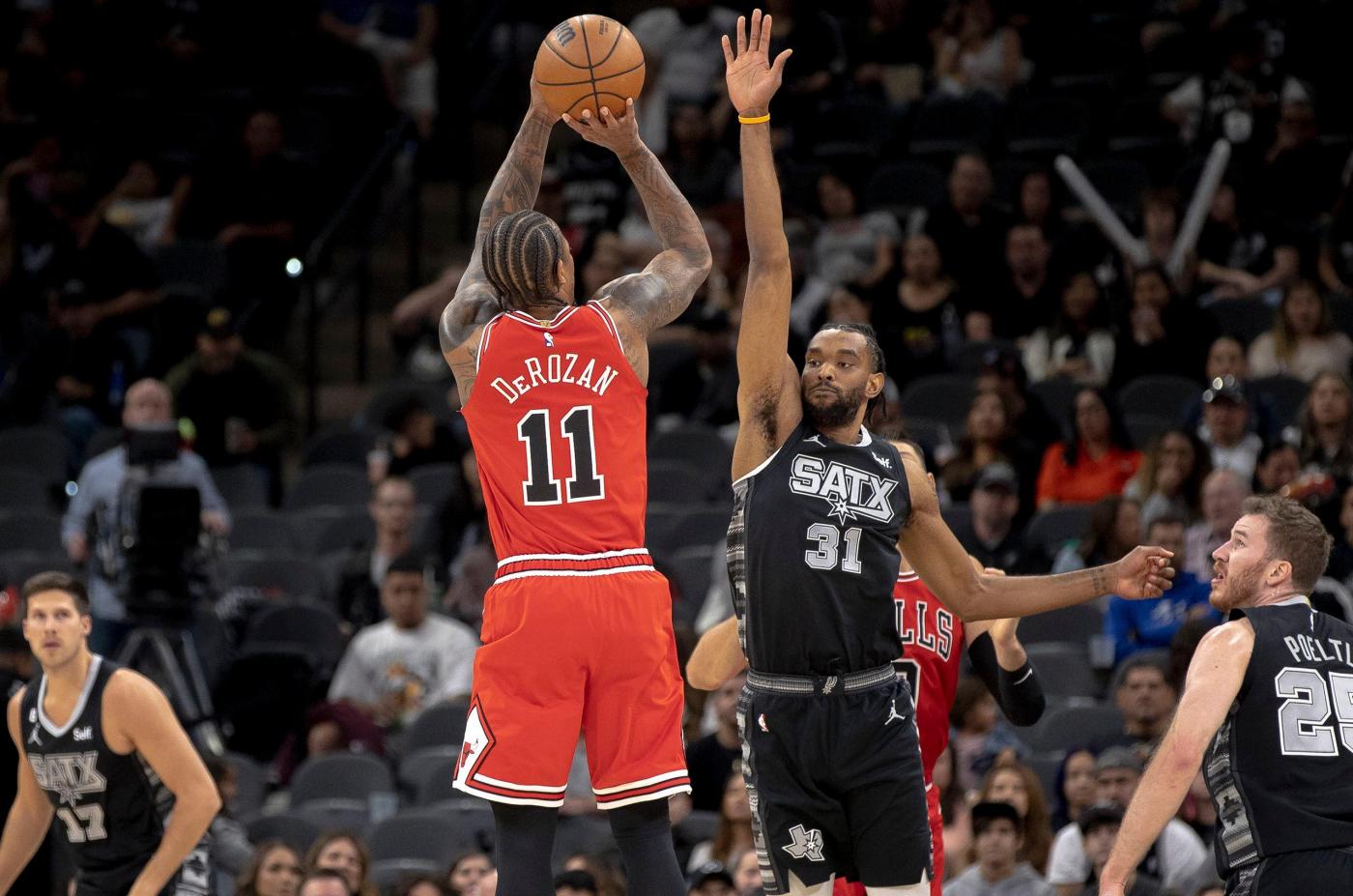 With a signature midrange jumper, Chicago Bulls forward DeMar DeRozan on Friday joined an elite group of NBA players in the first quarter against the San Antonio Spurs.

The basket marked DeRozan’s 20,000th-career point across 14 seasons. Only 49 other players have reached the milestone, including Michael Jordan, Wilt Chamberlain and LeBron James.

The moment was met with an immediate timeout from Spurs coach Gregg Popovich, who joined the AT&T Center crowd in cheering their former star.

“I never really looked at records or milestones,” DeRozan said after Wednesday’s game against the Indiana Pacers. “I just go out there and compete. When it happens, you’re aware of it being a reality. Especially just being a basketball junkie that I am — 20,000 doesn’t happen too often. To be in that position, that’s definitely crazy.”

DeRozan could have reached the elusive number at the United Center on Wednesday with a 24-point performance — a reasonable number for DeRozan, who is averaging 22 points per game this season. He fell seven points short, settling instead for a victory against the Indiana Pacers.

“It wasn’t one of those things where I was hellbent or I woke up this morning saying, ‘I have to do it,’ ” DeRozan said. “It’ll happen whenever it happens. I just wanted to play to get a win. Let it be what it was gonna be.”

Instead, DeRozan forged the milestone in a city that changed the trajectory of his career. Toronto might have been the city where DeRozan established himself as an NBA star, but San Antonio was the place where he reinvented himself. Even when he felt overlooked in the smaller market, DeRozan said he always felt loved with the fanbase and city.

Those three season in San Antonio were defined by the presence of Popovich, who guided DeRozan as much off the court as on it.

The pair remain close, making Friday’s moment of history even more special for DeRozan — although he also joked Popovich might put him in Box 1 — a defensive coverage designed to prevent a team’s highest scorer from getting any shots off — just to mess with him.

“(DeMar is) a beautiful, wonderful human being,” Popovich said before the game. “One of the best that I’ve ever coached. He’s just a sweet man.”

Reaching 20,000 points is only the latest in a long list of achievements for DeRozan, who last season matched a Chamberlain record for 35-point games shortly after becoming the first NBA player to hit game-winning shots on back-to-back nights.

Those accolades only grow to an acumen that his Bulls teammates believe will be remembered as one of the best in NBA history.

“I’ve said this before — I think DeMar DeRozan is a Hall of Famer,” teammate Zach LaVine said after Wednesday’s game.

DeRozan realized he was nearing the milestone in the final weeks of last season. At the time, it struck him — as a reminder of his longevity in the league and a sign of his success over his career.

But DeRozan said records and milestones aren’t his focus.

“Every day that I get to come into work and put on an NBA jersey, I’m beyond grateful,” DeRozan said. “I tell a lot of young guys — some of my favorite players I grew up watching, I had the opportunity to play against them on their way out. That put a lot of stuff in perspective for me. I remember being a rookie and to ask me where I’d be 14 years later, I wouldn’t have no clue.

“To be here still playing at a high level, having fun — it’s been an honor for me. Every time I get a chance to play basketball, it’s refreshing for me.”