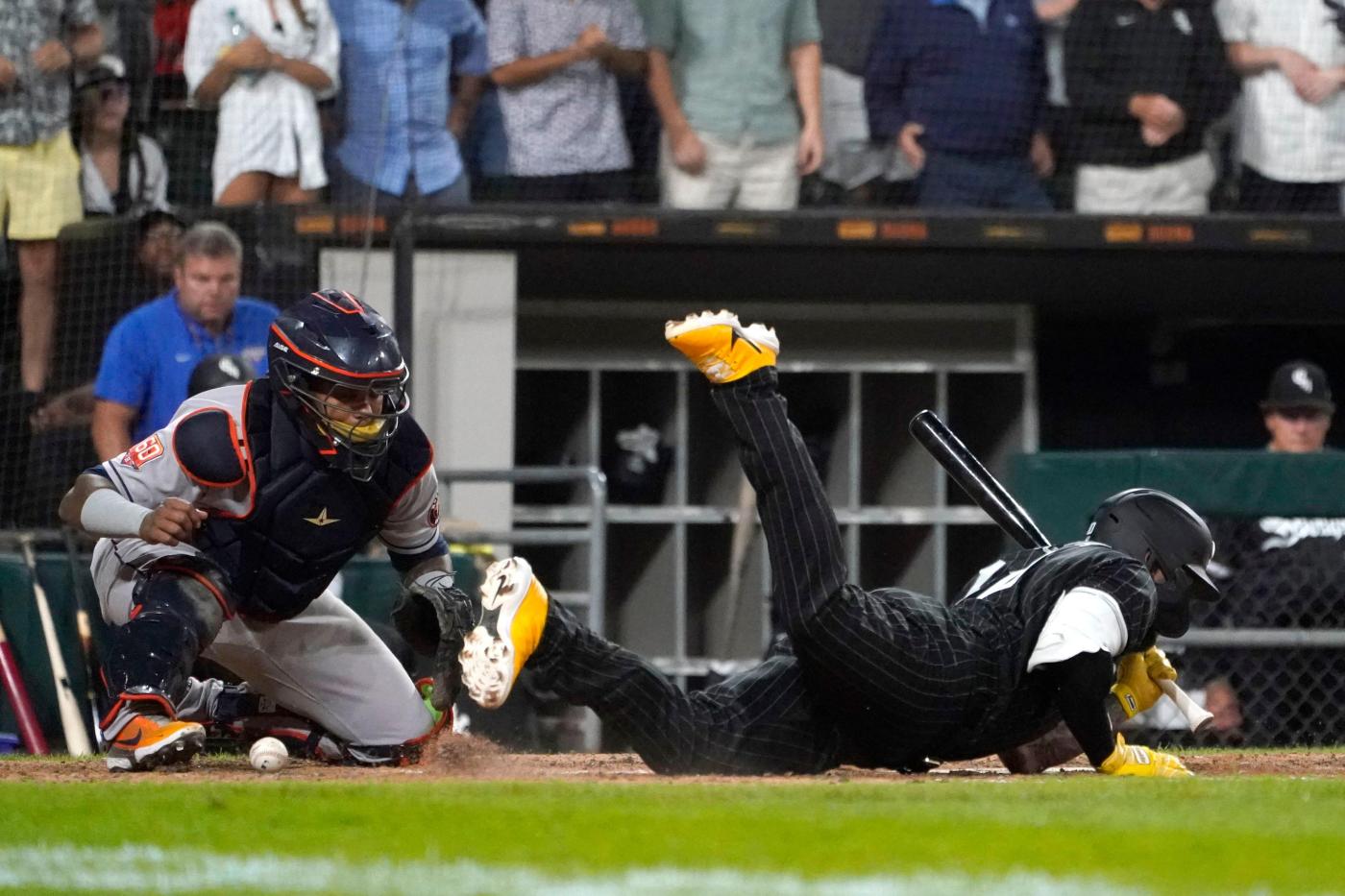 Adam Engel began the seventh inning with a broken-bat single to center. He represented the tying run for the Chicago White Sox against the Houston Astros.

Did the Sox have another comeback in them?

Romy Gonzalez hit a grounder to shortstop Jeremy Peña, and the Astros got a forceout at second. AJ Pollock’s hard-hit grounder up the middle turned into an eye-opening, inning-ending double play started by second baseman Jose Altuve.

“(We) got up in the late innings there with opportunities again,” Engel said. “Law of averages says you’re not going to capitalize every single time, but it felt like we were.”

The Sox saw their winning streak end at five and fell two games behind the Cleveland Guardians in the American League Central.

The Sox scored four runs in the eighth inning Monday to beat the Astros 4-2. They scored twice in the seventh and once in the eighth Tuesday, rallying for a 4-3 victory.

Yoán Moncada provided the go-ahead hit in both of those games. He found himself in another big spot Wednesday.

Eloy Jiménez walked with one out in the eighth. He was lifted for pinch runner Luis Robert. José Abreu singled off the glove of a diving Peña.

That brought Moncada to the plate with runners on first and second. He got ahead in the count 2-1. But reliever Ryne Stanek battled back and struck him out looking, painting the outside corner for the third strike.

Yasmani Grandal worked a 3-1 count but popped out to catcher Martín Maldonado in foul territory.

“We had (Moncada) up to the plate again, he’s been doing it for us the last two nights,” Engel said. “Felt really good about that spot. Obviously we didn’t come through (Wednesday), but I felt like we played really good baseball and gave ourselves a chance and just didn’t come all the way back.”

The Sox outhit the Astros 8-5 but went 1-for-8 with runners in scoring position and grounded into three double plays.

“The difference was the (Astros) defense,” Sox manager Tony La Russa said. “We hit a lot of balls hard. They turned them into outs, sometimes double plays. We made better contact than two runs.”

Michael Kopech, who exited after six no-hit innings in his last start Friday against the Detroit Tigers, kept the Sox in Wednesday’s game, allowing three runs on five hits with two strikeouts and two walks in six innings.

“A team like (the Astros), we know what they’re capable of, so three runs can tend to be too much like it was (Wednesday),” Kopech said. “I made some mistakes that I think could have been avoided and could have limited those three runs to less than that. But I can’t turn back the clock.”

Kopech pointed to a four-pitch walk to Altuve leading off the game as an important point. Altuve stole second and third and scored on a sacrifice fly.

“That four-pitch walk to lead off the game and back-to-back stolen bases ended up being a difference maker,” Kopech said. “Unfortunately you don’t want to see in the first inning a difference maker in the game, but that’s what happened and I kind of hold myself responsible for that.”

The Astros scored twice in the top of the fourth and the Sox answered with two in the bottom of the inning.

Moncada drove in a run with a double. The Sox loaded the bases with no outs, but Josh Harrison grounded into a double play. A run scored and Moncada moved to third. Astros starter Framber Valdez struck out Engel looking to end the inning.

“Obviously the fourth inning we were looking for more than two there,” La Russa said. “Look back at how that game was played and some of the plays they made defensively. They were the difference makers. I thought we competed really well against Valdez.”

Valdez allowed two runs on seven hits with six strikeouts and three walks in seven innings as the Astros slowed the momentum the Sox have recently built.

“We’ve been fighting,” Kopech said. “That goes a long way. What we did in the last five before (Wednesday) was impressive, and staying in there with them and keeping the game close, I think we played hard. As long as we can keep doing that, I think we’re in a good spot.”