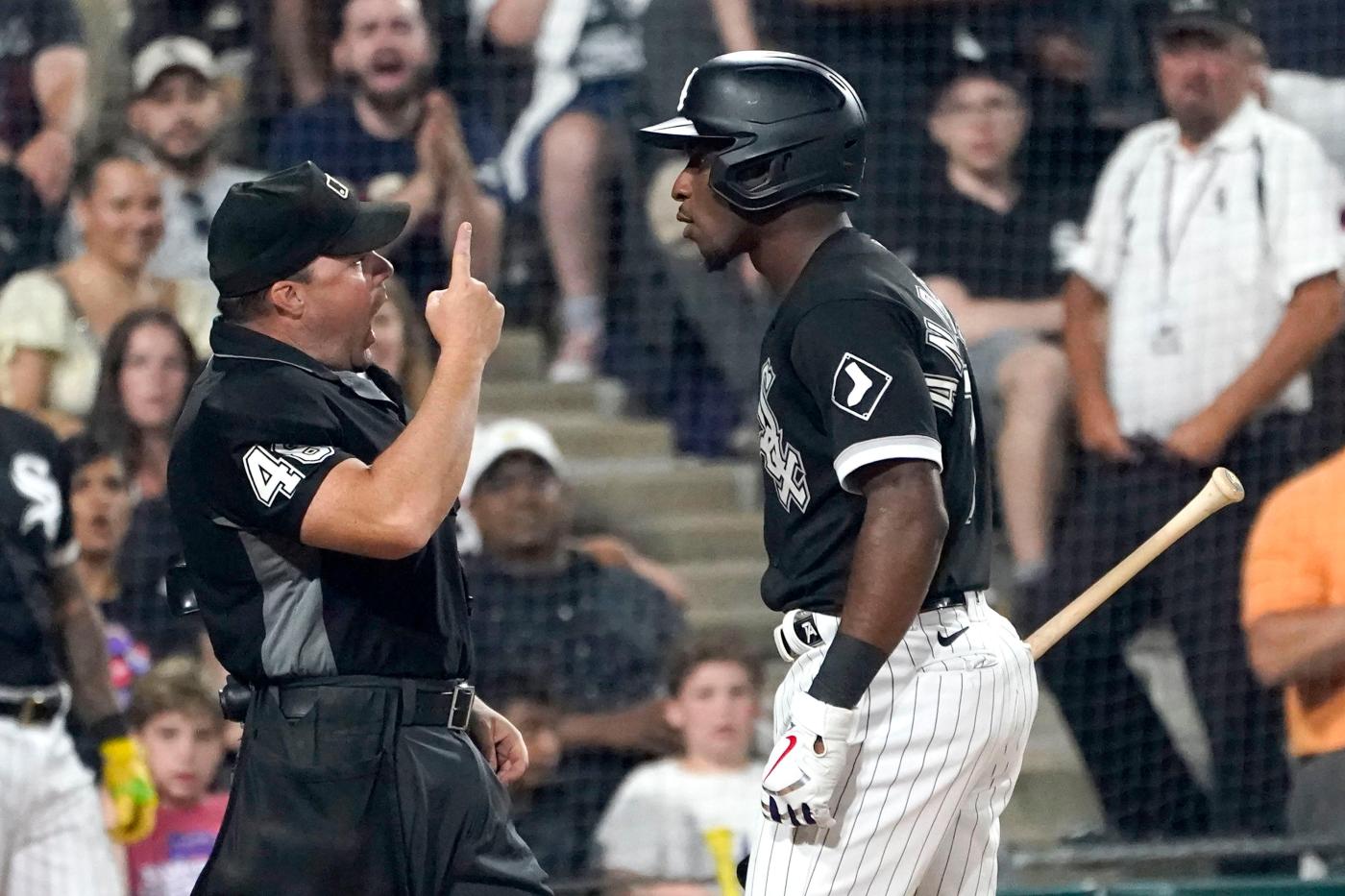 Chicago White Sox shortstop Tim Anderson received a three-game suspension and fine from Major League Baseball for making contact with umpire Nick Mahrley after his ejection during the seventh inning of Friday night’s loss to the Oakland A’s.

MLB reviewed the incident Saturday. Anderson appealed the suspension and was in the starting lineup for Game 2 of the series at Guaranteed Rate Field.

Video evidence suggested Anderson’s helmet clearly touched the bill of Mahrley’s cap as the shortstop got into the umpire’s face. Mahrley even pointed to the cap to alert Anderson of the violation, which is a sure-fire way to earn a suspension.

Anderson was a repeat offender, which factored into the discipline.

“It will be interesting to see how they handle it,” La Russa said Saturday. “I watched some of the video and there’s an argument that can be made in Tim’s favor. So we’ll see.”

So what is the argument? Didn’t Anderson’s helmet touch Mahrley?

“Did you see how the interaction happened?” La Russa replied.

“Well, the way I see it, the way we see it, there’s an argument made that the umpire didn’t move back,” he said. “He was moving forward as well.”

Video of the incident on Twitter did not show Mahrley moving forward when Anderson got in his face and made contact, so it’s hard to know what video La Russa watched that convinced him otherwise.

Anderson didn’t speak after the game, letting the media know he would speak Saturday. Before Saturday’s game, Anderson sent a message through the media relations department that he was unavailable.

La Russa on Friday said he was “disappointed” in Mahrley’s quick ejection of Anderson for arguing a borderline strike.

“I don’t think Tim cursed him or anything,” he said. “If you don’t allow a player to be emotional, then you just get a bunch of robots out here playing. That’s not entertaining. That at-bat, I thought the pitch was questionable. (Anderson) got upset. I think you need to allow players to spark as long as they don’t cross the line, and that thing escalated before Tim did anything.”

La Russa conceded umpires “are human beings, too, and they get upset.”

“But part of their training is you’ve got to let players be emotional, as long as they don’t get disrespect or vulgar,” he said.

La Russa, who eventually came out to protect Anderson after the damage was done, also was ejected.

The Sox can’t afford to lose Anderson for any significant time as they continue their long-running quest to get back over .500 and challenge the Minnesota Twins and Cleveland Guardians in the American League Central race.

They’ve been without Luis Robert since just before the All-Star break when the center fielder began suffering from what the team termed lightheadedness and blurry vision. After one game of a rehab stint with Triple-A Charlotte, Robert sat for what the team said was a cold.

La Russa on Saturday said Robert was flying to Chicago for tests. The Sox announced he would miss Saturday’s and Sunday’s games with Charlotte while he was “under the weather.” So his return to action remains as much a mystery as the ailment itself.

The Sox are in dire need of bullpen help with Reynaldo López on the injured list with a lower back strain, Joe Kelly recovering from a right biceps strain and closer Liam Hendriks struggling since the All-Star break. In a combined 24 innings of work since the break entering Saturday, the Sox bullpen posted a 6.75 ERA, third worst in the majors. The bullpen was supposed to be one of the team’s strengths but has been up and down all season.

“The best guy to answer that is Rick and Kenny,” he said.

And if there are no big moves?

“We’ll win with what we got,” he said. “We just need to win more often, especially at home.”

That goes without saying.

The Sox seemingly can’t get over the hump after reaching .500 and falling back time and again. It’s like “Groundhog Day,” with La Russa playing the role of Bill Murray — or maybe the groundhog.

Asked about the frustration of the season, La Russa said that’s the “value of experience,” meaning his own. He has been there before and pointed to the 2006 St. Louis Cardinals team that won 83 games in the regular season and went 3-9 down the stretch but still won the World Series.

“We’ve got to get a bunch of wins to really say we’re in contention,” he said.

The Sox are unlikely to be sellers at the deadline despite their lackluster play. Chairman Jerry Reinsdorf didn’t hire La Russa only to give up with two months left in his second season. The Sox famously gave up in 1997 when trailing Cleveland by 3 ½ games at the deadline, but Terry Bevington was the manager then, and Reinsdorf had no faith they would start playing better and win the division.

This team hasn’t proved it has what it takes to win in October, as most fans know by now. But playing in such a bad division, the Sox still could turn it on in September and get to the postseason, in which anything can happen, as the ‘06 Cardinals showed.

The Sox have been their worst enemy all season long, but the Twins and Guardians can say the same. So while this may be the worst divisional race we’ve seen in ages, it’s still a race.