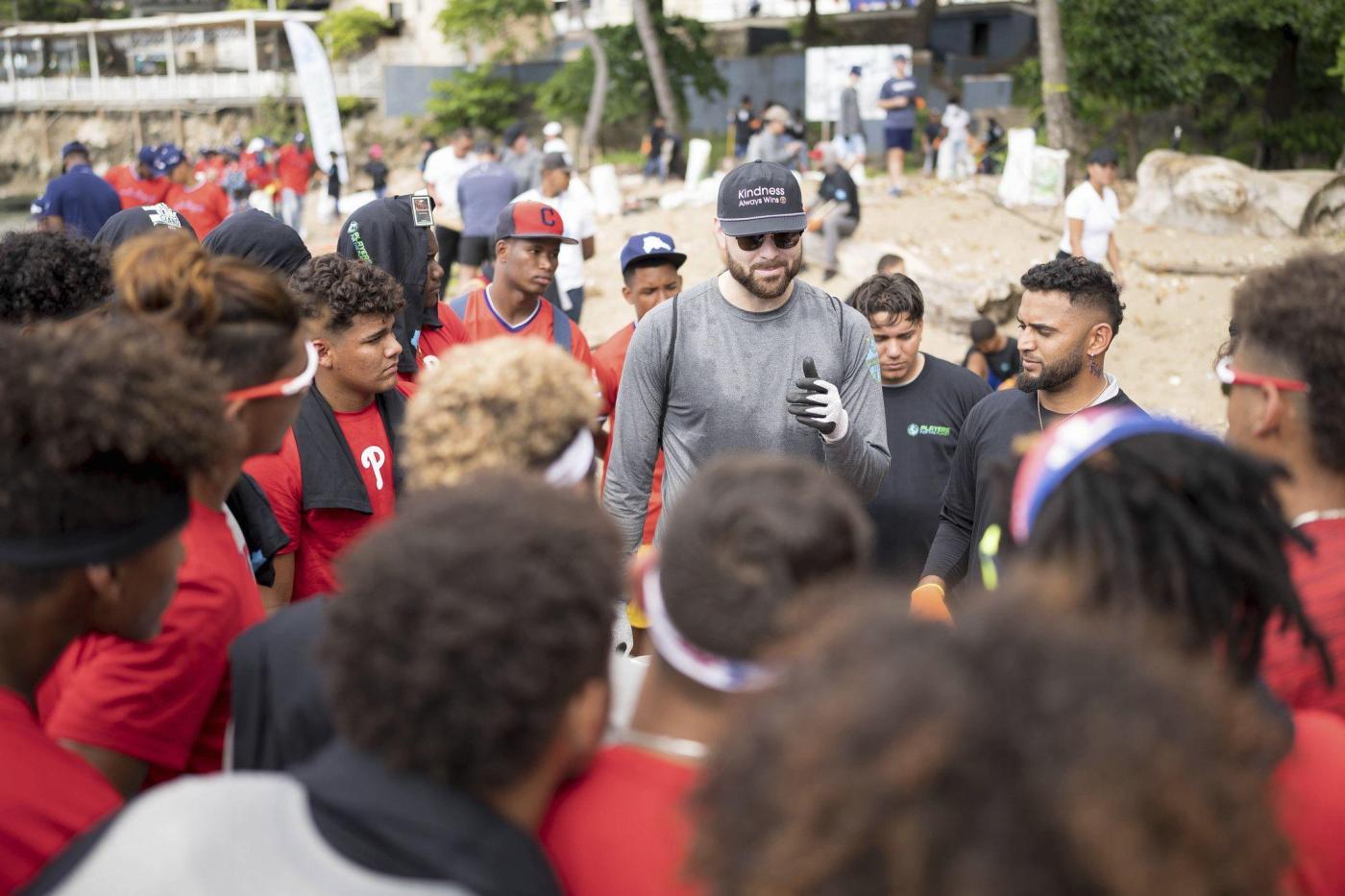 When Lucas Giolito arrived in the Dominican Republic earlier this month for a beach cleanup project, he noticed a group of young baseball players going through agility drills with a trainer.

“They’re literally having to navigate through all this garbage trying to do this beach workout,” the Chicago White Sox starter told the Tribune in a phone interview on Dec. 19. “It should be this picturesque, beautiful beach, but there’s just so much garbage and plastic — like ankle-high and across the entire thing.”

Giolito is trying to do his part to combat the issue. He was among a group of athletes from a variety of sports that worked on the cleanup project at Playa Montesinos in Santo Domingo. The trip was organized by Players for the Planet, an organization co-founded by former major-leaguers Chris Dickerson and Jack Cassel and focused on “positive change for our environment,” according to its website.

This was the fourth year of the beach cleanup, Dickerson, the group’s executive director, said during an early December phone interview with the Tribune. A 2018 CNN video featuring a “plastic wave” in Santo Domingo served as a spark.

Dickerson said 175 volunteers, including players from the Philadelphia Phillies’ Dominican academy, aided this year in collecting about two tons of marooned debris — nearly 3,000 pounds of which was plastic — during cleanups totaling almost three hours, first at Playa Montesinos and then Fuerte San Gil.

“Having the progress, the expansion of the program with word of mouth and the incredible reception we’ve received from Dominican players and partners on the ground as we continue to do this event has been tremendous,” Dickerson said.

Former Sox reliever Ryan Burr reached out to Giolito during the lockout last offseason, saying he was getting involved with Players for the Planet. Burr thought the organization was right up Giolito’s alley.

“I’ve always had an interest in environmentalism,” Giolito said.

Giolito said he did some charity work for the environmental nonprofit Heal the Bay while in middle school in Southern California.

“Since then, focusing on my career and everything, I didn’t really continue to educate myself on what’s going on — especially with the plastics crisis that’s kind of dominating,” Giolito said.

According to the Players for the Planet website, 8 million metric tons of plastic ends up in oceans every year.

In the days leading up to the cleanup, Dickerson said the athletes went to a recycling and sorting facility and to one of the lakes/rivers, taking everyone through the process in part to see “it’s a lack of infrastructure that’s essentially what the country is suffering from.”

Giolito knows the cleanups are just part of the effort.

“Using our platforms to hit all the right notes like, ‘Hey, it might take a little extra effort, but instead of having all those bottles, invest in a reusable water bottle.’ If everyone could just do a little bit, we might be able to see some good changes. That’s pretty much the goal.”

Giolito found ways to contribute to the cause before going to the Dominican Republic through a couple of Players for the Planet programs. One tied strikeouts to donations for a number of trees to be planted, and the other paired innings pitched with donations to facilitate cleanup and education programs in the Dominican Republic.

“It’s fun because it’s always nice to donate some money or time to causes you believe in,” Giolito said. “But being able to do it in that interactive way where I get to add a little bit of extra motivation.

“I’m training hard. Obviously I want to have a good season coming up here, I want the Sox to have a great season, I want us to win. But every time I take the ball, it’s like if I go seven innings instead of six, that’s going to help with cleaning up the beaches. If I strike out 10 instead of six or seven, that’s some more trees planted, helping the environment. That’s kind of a fun and cool way to go about it.”

Giolito continues his preparation for the 2023 season. He had just completed a workout before talking with the Tribune.

“It’s all about just spreading the word, trying to get more guys involved,” Giolito said. “Whether it’s athletes, entertainers, people that have the platforms. Do that little bit to care for our planet, care for our environment.

“Especially from a baseball perspective — I want to see this game grow, continue to give opportunities to young players all across the globe, and we need an Earth to play baseball on. In order for that to happen, we have to do what we can to protect the environment.”