‘Children of the KKK are not welcomed here’ 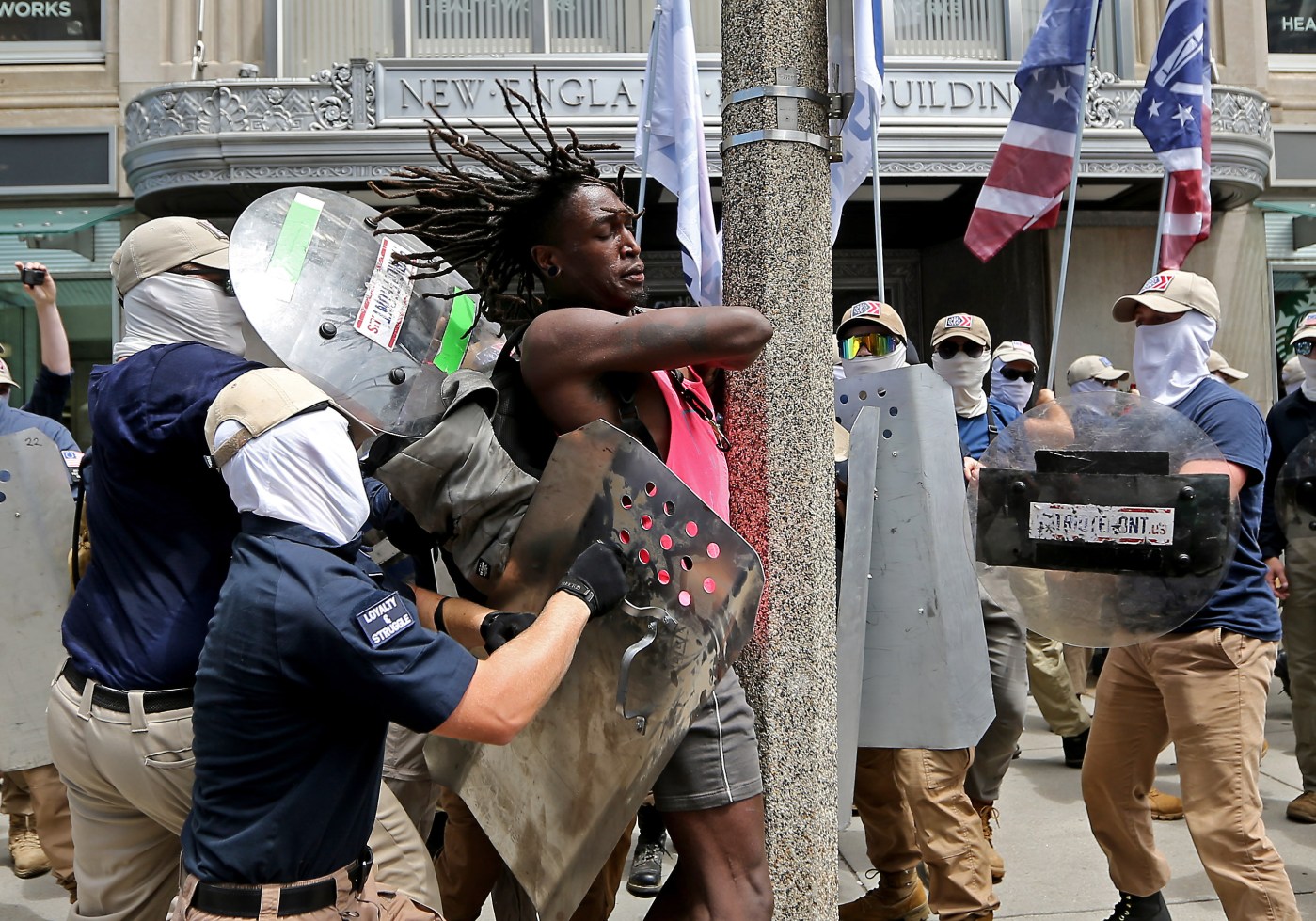 Elected officials ripped the “despicable” march by white supremacists through the heart of Boston Saturday, and one community leader is calling on the city to take action and push back further against racism.

“What we witnessed in Boston was an act we can only describe as despicable,” the Rev. Kevin Peterson, founder of the New Democracy Coalition, told the Herald on Sunday.

“Not only do we call on our elected leadership to decry and denounce this racism, we urge them to act with force in terms of addressing racism through policies and through community conversations around race,” he added.

About 100 masked members from the white nationalist group Patriot Front marched through the city early Saturday afternoon, turning stomachs and sparking an outcry from shocked onlookers who screamed expletives at the group, telling them to “Get the F” out of the Hub.

The white supremacists carried flags and shields before stopping in front of Boston Public Library to spew propaganda.

Peterson said Mayor Michelle Wu should respond to the incident by creating a Commission on Race to address racial reparations and systemic racism in the city.

Public service announcements denouncing white supremacists would be a good start, he said, along with community conversations about race.

“We must collectively say the children of the KKK are not welcomed here,” he said, adding, “We can look at this repugnant march as an opportunity to reshape our vision to make Boston racially hospitable for everyone.”

Peterson and others on Monday will hold a press conference to denounce hate.

“Screw off Nazi scum,” U.S. Rep. Seth Moulton said in a tweet. “I’m sure they missed the irony of white supremacists marching on the Freedom Trail.”

During the march on Saturday, Boston Police received a report of one Black man injured in a confrontation with Patriot Front members. The man said he was knocked to the ground and assaulted.

He suffered a laceration to his right ring finger and others to his head and eyebrow. He was taken to Tufts Medical Center. Boston Police on Sunday said it was still an active investigation into the incident.

Many leaders, including the mayor, have been quick to condemn the group’s presence in Boston.

Tanisha Sullivan, president of the NAACP Boston branch who’s running for secretary of state, said Patriot Front is a threat to Black individuals, people of color, LGBTQ individuals and the Jewish community.

“They’re a threat to public safety,” Sullivan tweeted. “A Black man reported being attacked today in Boston. We need a safety plan to protect us from the white supremacists. We can’t normalize this.”

Attorney General Maura Healey, a Democrat running for governor, said the masks worn by members of the group demonstrate their cowardice.

“White supremacists will cover up their faces, but we see them for who they are: cowards,” she tweeted. “Their hate will not deter us.”

“I strongly condemn the message of this group, and find it offensive and sad that they chose this weekend in which we celebrate independence to demonstrate their belief in supremacy over equality,” Diehl said.

“It is beyond disappointing that they think that our Commonwealth would be accepting,” he told the Herald. “They are not welcome nor is their message of hate and division.”