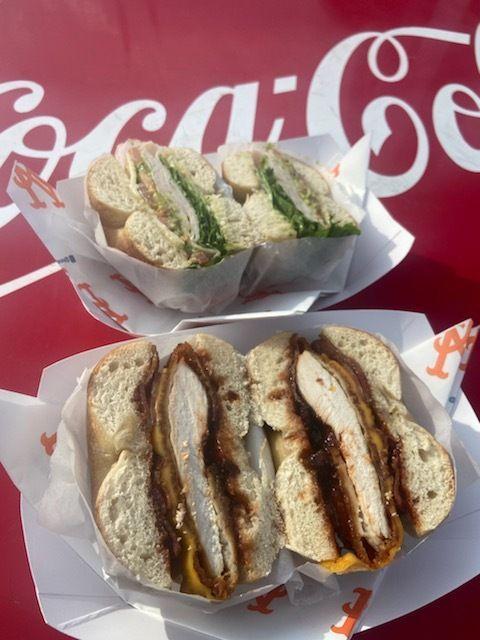 The bountiful harvest at Citi Field has another option.

On Tuesday, the Mets introduced the new, renovated Coca-Cola Corner, which will feature several New York restaurants throughout the rest of the season. Each vendor to come to the Coca-Cola Corner will do so in the form of a food truck. The Coca-Cola Corner has also added picnic tables and a few high-top tables that offer views of the field.

First up is Utopia Bagels of Whitestone, Queens. The local neighborhood bagel shop concocted three bagel sandwiches — The Cowboy, The Citi Fielder and the Classic Bacon, Egg & Cheese — which are now available in the Coca-Cola Corner above the right field seats.

The Cowboy is the unquestioned standout of the group. Served on a plain bagel, the sandwich consists of a chicken cutlet, American cheese, bacon and barbecue sauce. With the most robust flavor profile of the group, The Cowboy is both tasty and filling enough to be a solid option at both day and night games.

The Citi Fielder is a lighter option more reminiscent of a classic deli sandwich. With turkey, avocado, muenster cheese, lettuce, tomato and mayo, the Citi Fielder is a more traditional and less messy option than its bolder cowboy cousin. The flavor was a bit lacking on this one, but can be easily spruced up with hot sauce or other additions from concession stands along the concourse.

Lastly, the Bacon, Egg & Cheese is exactly what you’d expect. A staple of bodegas and bagel shops, Utopia’s version of the BEC is nothing to write home about, but is certainly a comforting alternative to the standard ballpark fare of hot dogs, chicken fingers and hamburgers.

The Cowboy and Citi Fielder will run you $13, and would benefit from coming on an everything, sesame, or any kind of bagel that is not plain. The Bacon, Egg & Cheese is $11. The Mets have not announced what the next food truck will be.