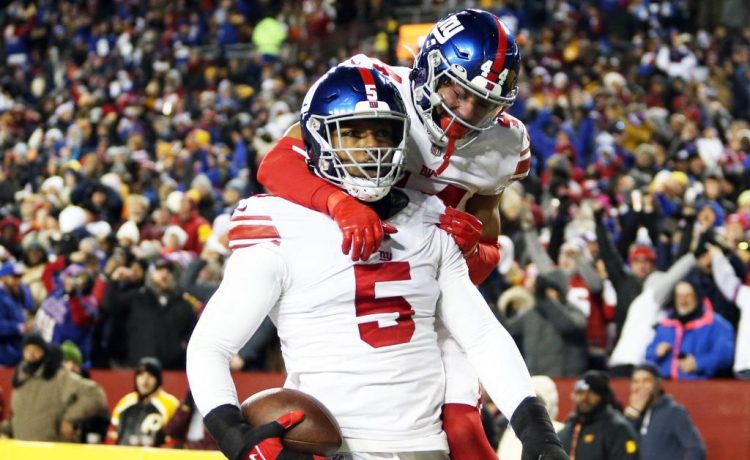 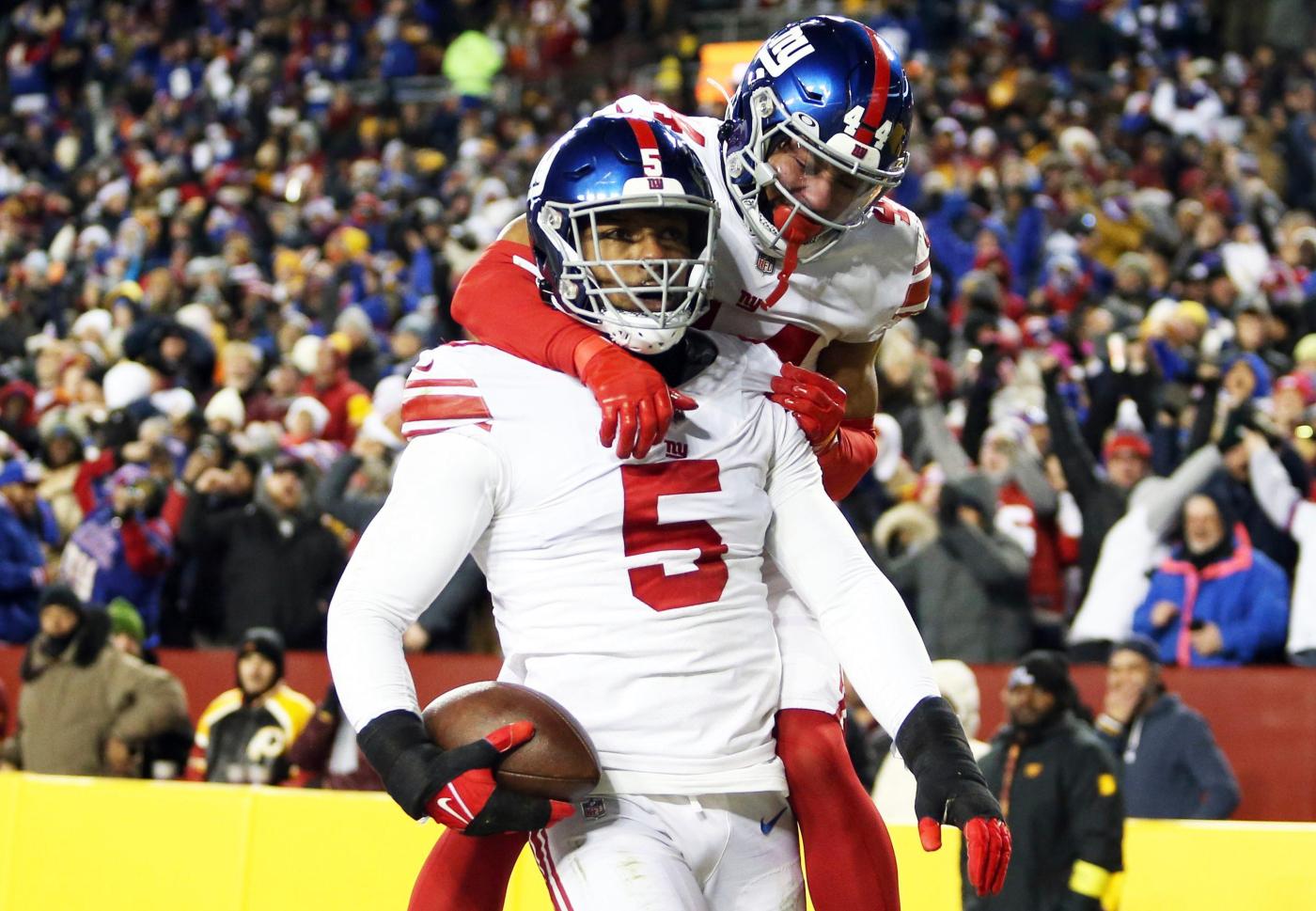 The Giants’ championship legacy resides in dominant defense, in the names of players that quarterbacks feared.

The franchise’s four Super Bowl trophies stand in a row on display in the lobby of the team’s practice facility looking like a D-Line that just broke the huddle. They are a constant reminder of the position revered most in these halls:

That is why on Sunday, Kayvon Thibodeaux doesn’t just have an opportunity to lift the No. 6-seeded Giants to an upset of the No. 3 Minnesota Vikings at U.S. Bank Stadium.

Thibodeaux, 22, has a chance to assert himself as the next face of this franchise, as the modern standard-bearer of a proud tradition built on becoming a QB’s worst nightmare.

“He has the ‘It’ factor,” Giants outside linebackers coach Drew Wilkins said of Thibodeaux on Friday. “He has that confidence. He wants to be in those positions where the game’s on the line and he has a chance to win it.”

Nothing makes a bigger difference in close games than pressure on a quarterback, and Sunday’s Wild Card showdown is destined to be close.

In a record NFL season for close games, with 203 decided by one score, the NFC North champion Vikings (13-4) went 11-0 in games decided by eight points or less, the most by a team in any single season in league history.

That included a 5-0 mark in games decided by three points or less.

The Giants (9-7-1), meanwhile, went 8-3-1 in one-score games and became only the third team in NFL history to win six games by a final score margin in a season’s first seven games.

Both Minnesota (-3) and the Giants (-6) finished the year with negative point differentials.

This one is going down to the wire. And that is what Thibodeaux lives for.

He strip-sacked Lamar Jackson late in Week 6 to help upset the Baltimore Ravens. He disrupted the Dallas Cowboys consistently in defeat on Thanksgiving Day with the whole nation watching.

His Week 13 overtime sack preserved a tie with Washington. He dominated the Giants’ Week 15 primetime Sunday Night Football victory over the Commanders.

And he is not shy about saying it: he considers himself “a closer.”

He called EA Sports after his dynamic game at Washington to lobby for higher ratings on his player profile based on his production.

He wouldn’t apologize after a poorly-timed celebration next to injured Colts QB Nick Foles, whom he had just laid out, on New Year’s Day.

He got a personal visit from Strahan at practice on Jan. 5, receiving pre-playoff advice from the Giant great that has taken him under his wing.

“I’ve been talking about it since I got drafted,” Thibodeaux said on Oct. 16 after strip-sacking Jackson. “In the draft questions they asked me what sets me apart from everybody else that plays my position? And it’s the fact that I’m a closer. I take pride in closing. I take pride in finishing the game.”

On Thursday, Thibodeaux was asked how he approaches those huge moments mentally and physically to make sure he changes the game.

“You gotta dig deep,” the rookie said. “That’s something where you tap into whatever level of dog you’ve got and you try to call up on it. Just having that relentless [approach], knowing no matter how tired you are, it’s only one or two more plays that you’ve got to dominate.”

He understands that in the playoffs, every snap ratchets up to that intensity, as well.

“Exactly,” he said. “I think that’s that next step. That’s what makes it different.”

When Giants GM Joe Schoen drafted Thibodeaux at No. 5 overall in April out of Oregon, though, he did so with the belief that Thibodeaux would walk the walk of closing games, and not just talk the talk.

That’s what every NFL team ultimately is seeking in a pass rusher: a finisher.

“I think guys particularly that you pick in the higher rounds, you evaluate how do they play in the biggest moments,” head coach Brian Daboll said Friday. “I don’t want to put too much on Kayvon. He’s a guy in his first playoff game. But he’s approached everything we’ve asked him to do the right way.”

Certainly Sunday’s game is about far more than Thibodeaux.

“I want the ball as many times as needed to win this game,” Barkley said Thursday.

Their constantly evolving roster should bring new depth names into the fold, too, from tight end Lawrence Cager to linebacker Jarrad Davis and maybe even newly-signed wide receiver James Washington.

They’re also trying to take down an old friend, Vikings defensive tackle Dalvin Tomlinson, who once played alongside Lawrence here in New York.

“It’s every team’s goal to have an opportunity to win a championship. Unfortunately, I wasn’t able to do it with him,” Lawrence said Thursday. “But now we play each other. I don’t like him this week. He probably [doesn’t] like me this week. It’s gonna be fun to go out there for a second time, play better, make fewer mistakes and win.”

Lawrence (7.5 sacks) is the centerpiece of the Giants’ defense, of course, who took down quarterbacks more than Thibodeaux (four sacks) this season. Edge Azeez Ojulari has 5.5 sacks in seven games. He’s been battling an ankle injury.

But Thibodeaux will be going up Sunday against backup Vikings right tackle Oli Udoh, with starter Brian O’Neill hurt. Plus, he’s shown a knack for keying up in the biggest moments.

Wilkins said the rookie’s intelligence has as much to do with that as anything.

“The thing he’s learned and gotten better at week to week is, when he’s rushing the same tackle for a consistent stretch of time, he’s gonna pick up things he can do the next time that maybe he saw,” Wilkins said. “So as the game goes on he’s able to benefit from that experience against that tackle.

“So on his 50th rep, he’s got more information than he did on that first rep,” he added. “It’s building throughout that game, and so that dialogue is, ‘Here’s what I’m here seeing. What are you seeing? It’s constant communication through the game to use that new information to our advantage.”

If they identify a tackle’s weakness, Wilkins and Thibodeaux might even plot to save that move for a key situation late in a game.

“That’s something where we’ll say, ‘Hey, this is gonna work, pick your spot with this one,’” Wilkins said with a smile. “He really just steps up in the moments this team needs him to step up.”

Rushing Kirk Cousins may help, too. The Vikings quarterback doesn’t move well. He’s a pocket passer, which makes him a more stationary target.

“It definitely is a different situation than playing a mobile quarterback, but you never want to take anything for granted,” Thibodeaux said.

“When you talk about it, I think there are only six games going on this weekend,” he said of Wild Card weekend. “It’s an opportunity that a lot of people, even myself included, have never been in. Just to be here now, you’ve got to be grateful for it.”

Thibodeaux isn’t just grateful, though. He’s hungry. He lives for these moments. And now he has a chance to further a proud Giants pass-rushing tradition that has produced four Lombardi Trophies in the quest for No. 5.