Closing out the Patriots preseason with summer superlatives 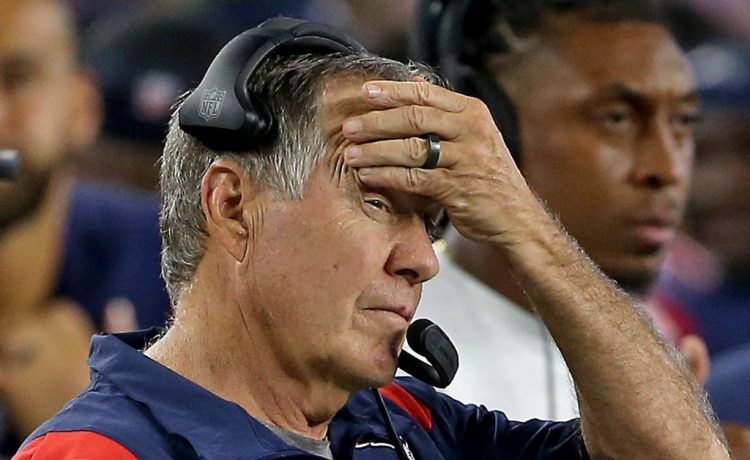 Training camp is over. So are the joint practices and preseason games.

Ready or not, the regular season is two weeks away for the Patriots and the rest of the NFL.

From here on out, Bill Belichick gets to go underground to prepare for Week 1 in Miami, with the daily practice monitoring by the media kept to a minimum.

So what was gleaned during the past five weeks when practices were open from start to finish, coupled with the three preseason games?

Let’s close the summer with some superlatives.

Any series in the two-minute drill.

Jones has clearly struggled with the Patriots installation of a new offense. He’s been visibly frustrated, Friday night’s game against the Raiders the most recent example.

But when he’s been back in the shotgun, ostensibly calling the plays, that’s when the Patriots’ second-year quarterback has looked the best.

During the joint practices with the Raiders, Jones really shined in the gotta have it moments while running the two-minute drill.

The traits that make Jones special, his super powers as some might call it, are his brain and ability to quickly make reads at the line. All of that has been on display during those periods in practice.

Matt Patricia as the play-caller.

Patricia had the laminated card over his mouth. He communicated the plays to the starting quarterback in all three games. And yet, Bill Belichick kept playing games with the media, only acknowledging that Patricia was communicating with Jones, but not necessarily calling plays.

Unless Belichick decides he put too much on Patricia’s plate with play-calling and offensive line duties and takes the reins himself, Matty P is the man.

But we won’t know that for sure until Week 1.

There are plenty to choose from, but this one following the preseason game with the Panthers stands alone.

Reporter: “With Matt calling all the plays tonight, is that the direction you’re going to go in the season? Is that process complete?”

Reporter: “Is the play-calling process between all three of you?”

Reporter: “Understanding you don’t want to tell us much about the offensive play-calling situation … ”

Reporter: “OK, how aware are your offensive players about this play-calling process?”

The second-round rookie actually looked like he might do something other Patriot wideouts chosen early in the draft have failed to do — succeed.

Thornton seemed to improve with each practice and each rep. He was impressive to watch, and not just because of his blazing 4.28 speed. His route-running stood out, along with his ability to channel his bursts to get by defenders.

Thornton, who was reported to have suffered a fractured clavicle, will likely be put on IR after Tuesday’s cutdown deadline, then not be available until October at the earliest.

It’s a significant setback both for him, and the team. While he showed a measure of toughness to deal with the physicality of the NFL, there remain questions about his twig-like frame and perhaps being injury-prone because of it.

He suffered a right ankle injury Friday night against the Raiders. He was helped to the blue tent, and later carted off to the locker room.

He was not only a lock to make the team, but also in the mix to help make up for the loss of third down back James White, who retired, unable to make it back from the hip injury he suffered last year.

Montgomery was good both in the pass game — he could line up as a back or receiver — and run game.

Any one of DeVante Parker’s contested beauties.

It’s really hard to choose. Parker just has a knack for shooting up as high as needed, and making sure he’s the one who comes down with the ball in a crowd.

One that really stood out came during an 11-on-11 session against Carolina during joint practices. He elevated over Panther defenders Donte Jackson and Xavier Woods to pull in a jump ball down the sideline for a 30-yard completion.

Throughout camp, it wasn’t unusual to see Parker make those kind of plays, which bodes well for the offense going forward.

Offensive line trying to adapt to the outside zone scheme.

There have been communication breakdowns along the line. It’s been a recurring theme throughout.

Between allowing free rushers into the backfield, not to mention providing little to no running room to get the run game untracked on the stretch runs, it’s been a mess.

There’s time to get it straightened out, or just scrap it entirely, but with Patricia, the offensive line coach by name, also handling play calling duties, that might not be the best recipe to get it fixed.

Following the second straight day of joint practices that were marred by fights, Slater, one of the most respected players in the league, took the podium and let it fly.

Then he added: “When we get into a game situation, we can’t have the type of issues that we’ve had this week. It’ll cost our team. So I think it’s time for us to refocus and get back to playing football. We’re not MMA fighters. We’re not Mike Tyson.”

The Patriots captain, however, justified his team’s response to the incident that touched off the first fight of Day 2 with the Panthers.

“When you have a teammate who is hit, who’s down, there’s clear symptoms of what’s happened to him — we all know what they look like as football players — he’s demonstrating those symptoms, and then you have players celebrating that act, I take an issue with that. And I don’t have a problem saying that. I don’t care if it’s in a game situation or certainly in a practice situation. That’s not OK.”

Penalties. In the three preseason games against the Giants, Panthers and Raiders, the Pats were penalized 22 times for 182 yards.

Two penalties cost them a pair of scores in the 23-6 loss to the Raiders. They were also flagged for having too many men on offense against the Panthers.

Embarrassing to say the least.

This is clearly not typical of a Belichick-coached team. The Patriots usually don’t beat themselves. Sure, it’s the preseason. We’ll see if it’s a precursor of things to come.

Love the story, love his vibe. Enjoyed watching him at Matthew Slater’s side, soaking up every bit of advice and wisdom from the special teams captain during practices. Hard not to see him making the team given the importance Belichick places on special teams, and the plays he’s made in all three preseason games.

But the class of undrafted rookies is well represented beyond Schooler. Alabama defensive lineman LaBryan Ray has flashed as a pass rusher. Purdue outside linebacker DeMarcus Mitchell, like Schooler, has been a presence on special teams. But he’s also played well on the defense.

This has been one of the best undrafted groups yet.

Throughout camp and the preseason, however, he’s been one of Jones’ favorite targets. His 45-yard catch down the sideline on a third-down play against the Panthers was one of the highlights of the summer.

He’s also been impressive in making one-handed catches while fighting off double coverage.

Third-year linebacker Anfernee Jennings is a close second given his improvement, but Agholor gets the nod.

Having Jalen Mills assert himself as the No. 1 corner.

With J.C. Jackson leaving in free agency, it seemed like Mills would be the top gun just by default. During the past five weeks, he’s earned the job.

While it seemed like he was playing a bit out of position out on the boundary last year, he looks the part this year. He’s tenacious, disruptive, and aggressively attacks the football. He still gets beat on occasion. Raiders All-Pro wideout Davante Adams won all of their matchups during the first joint practice, but Mills came back the next day and split with the talented receiver on 1-on-1s.

It was unexpected to see him evolve into the best player at camp.

He might not be a prototypical slot receiver when it comes to the Patriots, but that doesn’t matter. He still finds a way to get open, and make plays. He was Jones’ go-to-guy last year, and it’s been the same throughout camp.

On the defensive side, Matthew Judon gets honorable mention. He hasn’t gotten much press, but that’s because he’s done his job without much fanfare.

He’s a pass-rushing presence out on the edge, consistently makes plays, and that hasn’t changed during the summer.

Ten-time Pro Bowl special teamer Slater called it an “elite” play, one he wasn’t sure he could make.

It came during a punt against the Panthers.

Jake Bailey sailed a boomer toward the end zone. Humphrey flew down the field, and used his 6-foot-4 frame to power past a Panthers defender.

At this point, the ball had already bounded and was about to land in the end zone for a touchback.

Only Humphrey had other ideas. He closed rapidly on the ball and launched himself, flying over the goal line to grab the ball and flip it back into play. The ball was downed by Schooler at the 3-yard-line.