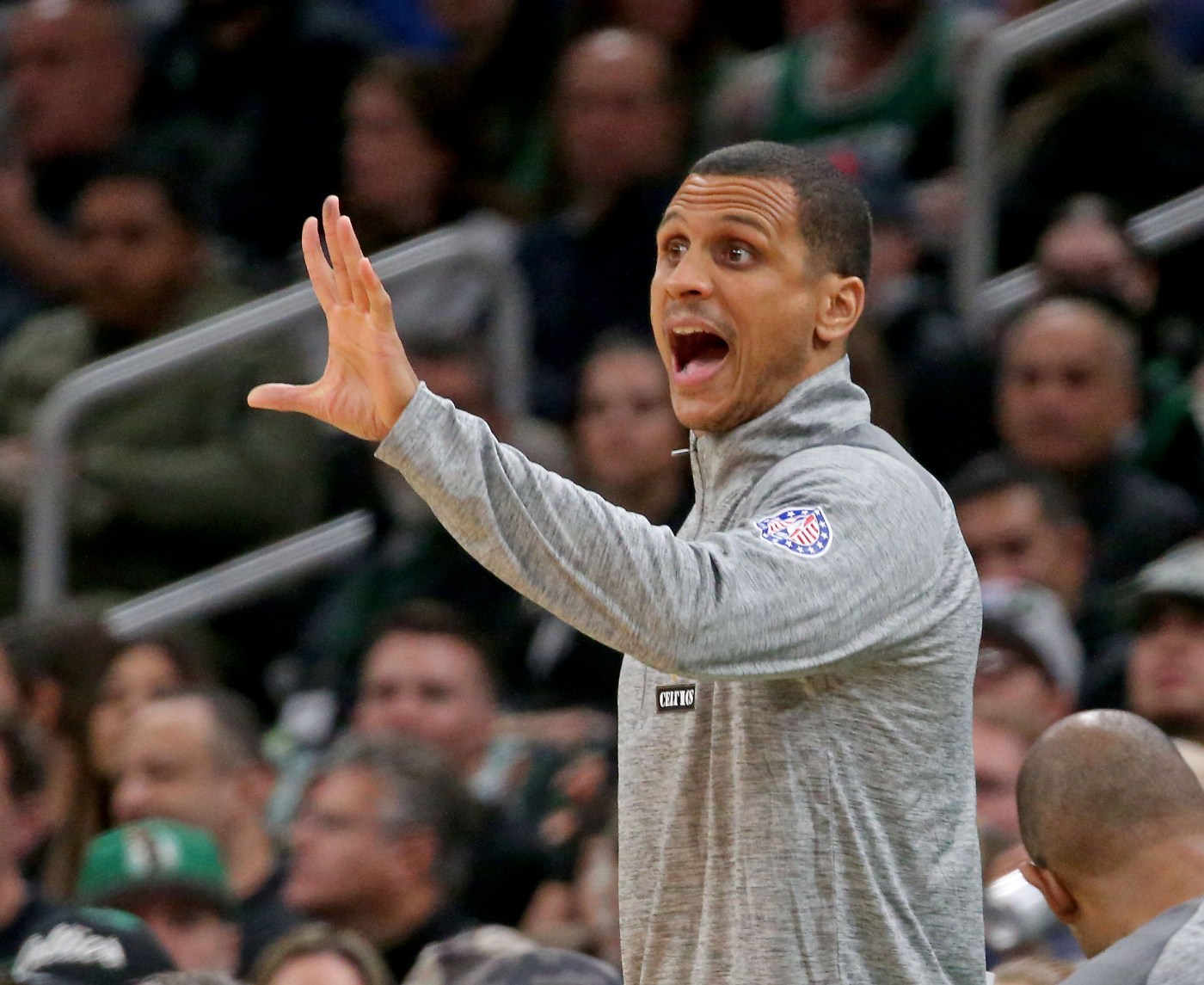 Celtics interim head coach Joe Mazzulla missed his second consecutive game on Thursday night against the Clippers due to corneal abrasions, but the team is hoping he’ll be back soon.

Mazzulla suffered the injury in both eyes Tuesday while playing in a pickup game, according to the team. It looked like he would attempt to coach through it for Tuesday’s game against the Rockets as he conducted his pregame press conference, but 10 minutes before tip, he was ruled out due to eye irritation.

Damon Stoudamire, who won his first game as NBA head coach when he coached in Mazzulla’s absence for Tuesday’s victory over the Rockets, coached again Thursday. He said the Celtics expect Mazzulla back for the upcoming road trip that starts Sunday in Denver.

“He’s getting better,” Stoudamire said. “We’re just kind of taking it day-to-day, but we expect him back soon. Until then just one game, one practice at a time.”

Stoudamire said his pregame routine and preparation weren’t any different but he’s been in communication with Mazzulla.

“He’s encouraging,” Stoudamire said. “The biggest thing for him is we need him to get healthy so he can get back. We like to be whole around here. It hasn’t been that way often, but now we’ve got all our guys back, get him back and we’ll be whole. But Joe has definitely been sending texts, and we’ve talked. The biggest thing for me is just making sure he’s in good spirits, because I know he wants to be here.”

Stoudamire has been working as an NBA assistant since his playing career ended in 2009 – with the exception of one stop as a college head coach at Pacific from 2016-21 – and the 49-year-old is well-respected by not only the Celtics but around the league. Clippers coach Ty Lue, who played against Stoudamire during his playing days, was excited for his counterpart’s opportunity.

“It’s tough to see Joe out … but Damon deserves a head-coaching job in this league,” Lue said. “He’s been around for a while, so just see what he had a chance to do against Houston the other night and now coaching again tonight, it’s just good to see. So, hopefully he can continue to keep getting this experience and he gets an opportunity soon.”

Mazzulla suggested before Robert Williams’ debut two weeks ago that the Celtics center wasn’t on a minutes restriction as he returned from left knee surgery, but it seems the team is certainly managing his workload in his first few weeks. He came off the bench for the sixth consecutive game since his return on Thursday night, and the Celtics don’t seem to be rushing him back into the starting lineup, assuming that’s the plan.

“That’s just a day-to-day thing,” Stoudamire said. “I go accordingly. We’ve been given medically the minutes that he should play and we just kind of play off of that. You can see Rob, to me, getting better each day, each game. Last game he was able to play consistent minutes for a long period of time. And that was big for him. I think more than anything as a team, we know we need him. But I think the biggest thing is he needs to be comfortable.”

The non-COVID illness that’s sweeping through the Celtics locker room reached Malcolm Brogdon and Blake Griffin, who both missed Thursday’s game against the Clippers. Brogdon went through pregame warmups but was ruled out about an hour before tip.

While Smart has been busy dishing out helpers on the basketball court, he got an assist from Hollywood – or more specifically, Antarctica – to make his Christmas one he’ll never forget.

Before the Celtics’ Christmas Day win over the Bucks, Smart got engaged to his girlfriend Maisa Hallum, and he got some help from actor Will Smith. As shown in his Instagram post announcing his engagement, Smart played a video message from Smith before he made his proposal.

“I just wanted to take a minute. I wanted to wish you a very, very Merry Christmas,” Smith, who was in Antarctica, said in the video. “Now, I know that you may not have gotten the stuff that you wanted. I promise you, you’re not going to end this Christmas empty-handed, OK? That’s all my message is.”

Smart then dropped to a knee to pop the question.

“It was cool,” Smart said Thursday. “Will didn’t have to do that. He took time out of his day, so I really appreciate it.”

Smart gave the credit to his social media manager for coming up with that idea.

“My people who run my social media did a good job, I guess trolling, I don’t know what he was doing,” Smart said. “I actually didn’t know that he put that up there at the time. I was still celebrating. But it was funny, everybody was texting me laughing about it. It was cool.”