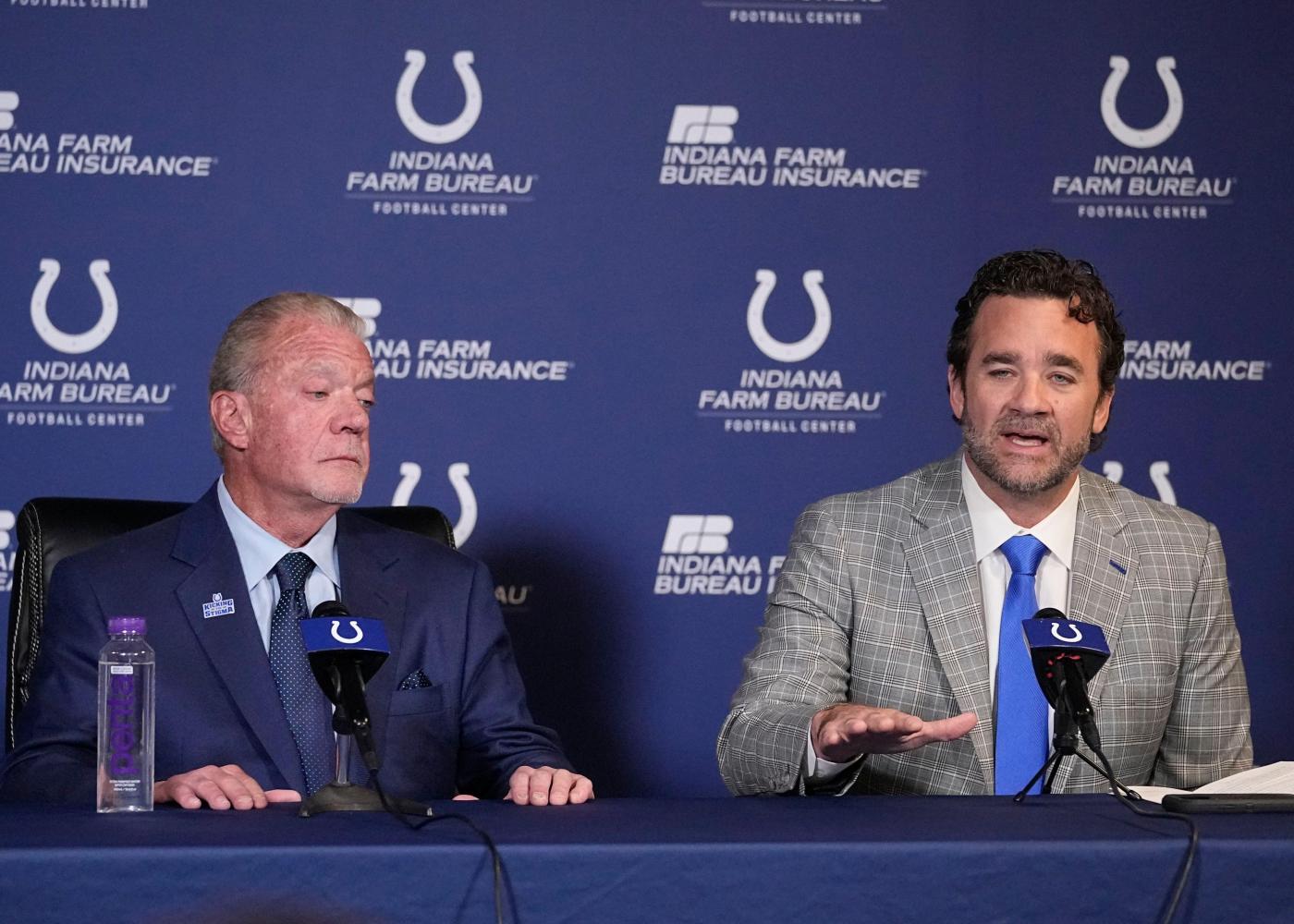 It’s hard to believe that Twitter’s new blue check policy resulted in several fake breaking news items in professional sports the past week, and Jeff Saturday’s hiring as Indianapolis Colts head coach wasn’t one of them.

Owner Jim Irsay’s tabbing of Saturday to replace the fired Frank Reich was a slap in the face to the entire coaching profession, to assistants grinding day and night for a chance that Irsay handed to the inexperienced, paid team consultant already in his ear.

More discouragingly, while Irsay promised to follow the Rooney Rule and interview minority candidates for the full-time position at season’s end, Irsay saying Saturday’s hiring was “for eight games, hopefully more” spit in the face of the rule’s spirit.

It said the quiet part out loud: that Brian Flores’ pending lawsuit didn’t manifest out of thin air. That many times, Black or minority candidates are interviewed only to fulfill the rule’s requirements, while ownership already has its candidate in mind.

How did this happen?

Well, future Hall of Fame lineman Joe Thomas’ scathing description of Saturday as Irsay’s “drinking buddy” on NFL Network might not have been far off.

Two days later, the Colts fired offensive coordinator Marcus Brady, who wasn’t even calling the plays. The following Sunday, Irsay reportedly called Saturday in the middle of a beatdown by the Patriots to ask the former All-Pro Colts center what was wrong with Indy’s pass protection.

By Monday, Reich was out as head coach and Saturday was in.

At a circus news conference introducing Saturday, Irsay claimed GM Chris Ballard’s job is safe. Multiple league sources have told the Daily News they do not believe that is true.

And Ballard pushed back strongly against any suggestion that the Colts are tanking for a high draft pick, but the fact is a tank comes down to the owners’ actions, even as the coaches and players try to win.

When Irsay’s franchise has succeeded, it’s been because the Colts found their way to No. 1 overall picks to take Peyton Manning (1998) and Andrew Luck (2012).

Now they are starting sixth-round pick Sam Ehlinger at quarterback behind a sieve offensive line with a first-time head coach taking over midseason.

Saturday, for his part, was working as an ESPN analyst while also being paid as a Colts consultant before taking the coaching gig. Good work if you can get it.

He is the first person with no college or pro coaching experience to become an NFL head coach since 1961, when Norm Van Brocklin took over as the Minnesota Vikings’ expansion head coach.

Van Brocklin won the MVP award for the champion Philadelphia Eagles in 1960, joined the Vikings as head coach the following year, and posted a 29-51-4 record in six seasons with no playoff appearances.

Saturday by all accounts is a respected professional in the business. But he is the central figure in one of the most ridiculous developments in NFL history.

And it’s going to take a lot of work to make lemonade in Indy, beginning with Sunday’s visit to the Raiders (2-6) in Las Vegas.

The office of Washington D.C. Attorney General Karl A. Racine announced Thursday that it has filed a lawsuit against the Washington Commanders, owner Daniel Snyder, the NFL and commissioner Roger Goodell accusing them of colluding to deceive and mislead customers about their investigation of the team’s workplace for financial gain.

“For years, the team and its owner have caused very real and very serious harm and then lied about it to dodge accountability and to continue to rake in profits,” Racine said at a news conference. “So far, they seem to have gotten away with it. But that stops today.”

The lawsuit seeks financial penalties. Racine’s office said it also will seek a court order to force the NFL to release the findings of a previous investigation of the team’s workplace conducted by attorney Beth Wilkinson — which curiously never produced a written report of her findings at the enabling of the league.

The Commanders of course made a bad situation worse when they heard Racine was going to hold a news conference. Their attorneys released a tone-deaf statement that tried to use running back Brian Robinson Jr.’s recent shooting to their benefit in their fight against the impending lawsuit.

The statement read: “Less than three months ago, a 23-year-old player on our team was shot multiple times, in broad daylight. Despite the out-of-control violent crime in DC” and went on to complain about the AG’s behavior surrounding the investigation.

The NFL called Racine’s allegations “legally unsound and factually baseless” and said the league would “vigorously defend against those claims.”

There are no indications that Raiders first-year head coach Josh McDaniels is on the hot seat, but it’s fair to say there would be no excuse for a loss to Saturday’s Colts on Sunday. … Rams receiver Cooper Kupp cost his team the game in last week’s loss at the Tampa Bay Buccaneers by sliding inbounds short of the first-down marker. The Rams’ focus was running the clock down as far as they could to start their final fourth quarter drive, but it’s on the player to make a judgment call to end the game. And Kupp made the wrong decision. …  NFLPA president JC Tretter called this weekend for the league to immediately replace and ban all ‘Slit Film Turf’ playing surfaces, including the controversial turf at MetLife Stadium that the Giants and Jets call home. The league released a chart this week that showed turf and grass ‘non-direct contact injuries’ occurred at a nearly identical rate in 2021, compared to a clear disparity and higher injury rate on synthetic surfaces in previous seasons. This issue is not going away.

HOW ‘BOUT THEM GIANTS?

Johnson told The Athletic’s Dan Pompei for a recent feature that Daboll called him for advice in his first season as an NFL coach and they spent “about an hour” on the phone.

“[Daboll] asked me about the biggest jump from being a coordinator to being a head coach,” Johnson said. “I told him when you are a coordinator and you walk down the hall, nobody really gives a s—t. But now you walk down that hall and every head will turn — every secretary, every administrative assistant, every coach.

“If you are going to get the most out of this organization, you have to have interaction,” Johnson continued. “No one likes to be ignored, but especially nobody likes to be ignored by the leader. He said, ‘I’m taking pizza down to the equipment people.’ If everybody in an organization is on the same page, it creates the culture that you want.”

“We’re the fourth winningest franchise in the league since 2007. That means in the upper quartile of winners, we’re in the top quartile of that upper quartile.” — Colts owner Jim Irsay, speaking a language only he can understand