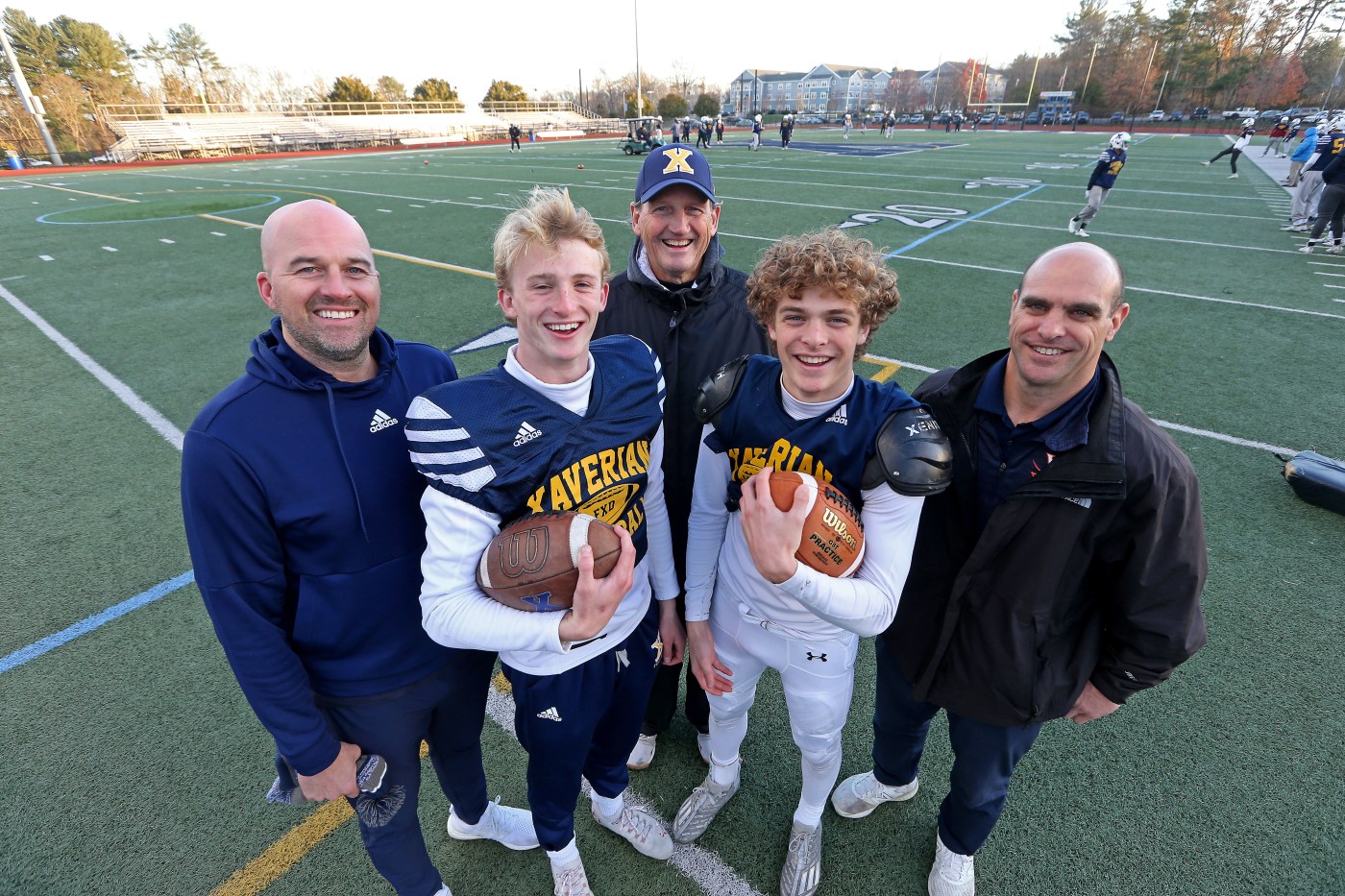 Don Hasselbeck was looking for a high school to send the oldest of his three boys, Matthew. Less than 15 miles away, Gene Comella was in a similar situation, trying to find a suitable academic destination for his son Gregory.

Both landed at Xaverian in the fall of 1989 and it was a match made in heaven.

Matt Hasselbeck became the school’s greatest quarterback, starring at Boston College before embarking on an 18-year NFL career. Greg Comella was the Player of the Year in Massachusetts in 1992, played for Bill Walsh at Stanford and spent seven years in the NFL.

Their love for the Westwood school has been passed down to their children. Henry Hasselbeck is the starting quarterback for the Hawks, while Charlie Comella is a two-way starter who has already received scholarship interest from BC and West Point.

“This is home,” Matt Hasselbeck said as he greeted a former teacher, Courtland Morse. “I didn’t want to come here originally because it was an all-boys school, which is why my mother (Betsy) probably pushed me to come here. It turned out to be the best decision ever because I loved everything about the school, made some great friendships along the way.”

While Betsy Hasselbeck may have had her reasons for sending their oldest child to Xaverian, her husband Don was already eyeballing the parochial school on Clapboardtree Street. A former tight end for the New England Patriots, Don was playing pickup basketball at Xaverian.

“We were living in Norfolk at the time and the only option was King Philip, who didn’t have the program they have now,” said Hasselbeck, who spent six of his nine pro seasons in Foxboro. “I was playing basketball at Xaverian and one of the guys playing was Ted Freeley, who was an assistant football coach at Xaverian, He talked about the school and there was a lot about what he said that I liked.

“I grew up in Ohio and went to a Catholic school, LaSalle in Cincinnati, I liked the Catholic education and the foundation they established. I think those things are very important and Xaverian seemed to have a lot of what I was looking for in a school for Matt.”

Xaverian didn’t have girls, but it had football. One trip to the Hawk Bowl in 1988 swayed Matt Hasselbeck for good.

“My neighbor Peter Davenport was a quarterback on the team and they were playing Brockton, who might have been No. 1 in the country at the time.” said Hasselbeck, who is the team’s quarterback coach. “They were awesome, but Xaverian hung in there for three quarters before Brockton took over. After that, I knew that’s where I wanted to go.”

Meanwhile, there was an eighth-grader in Wellesley looking for his high school destination. Comella didn’t know much about Xaverian other than what he got from neighbor Paul McDermott. Affectionately known as the mayor of Xaverian, McDermott, who passed away in January, never missed an opportunity to extol the virtues of Xaverian.

“He was always talking about what a great school Xaverian was,” Comella said. “He talked about what a great athletic school it was, how his sons (Michael and Sam) went there and that Dana Barros went there. When I came here, the only person I knew was Deon Young so that made the transition easier. I loved everything about this school, I was fortunate to have so many teachers who became important influences on my life.”

Comella and Hasselbeck were part of a dominant freshman team at the school. Hasselbeck is quick to mention that the school had a trophy which said we were 8-0 and never punted once all year, adding it’s what happens when you have Greg Comella.

As much as they enjoyed their freshman year, sophomore year was a little tougher — a lot tougher if you asked Matt Hasselbeck.

“The MIAA didn’t allow schools to have camps on their campus so we went to Cardigan Mountain for a week,” Hasselbeck said. “That was a tough camp, I would have quit football but we were so far. I remember we had three-a-day practices and it was tough. I went on to play for Tom Coughlin at Boston College and he was tough, but that camp prepared me for him.”

The two keyed Xaverian’s run to the Catholic Conference title in 1992. Comella was Massachusetts Player of the Year and made several All-American lists. Hasselbeck was widely regarded as the state’s top quarterback and was recruited by several major colleges. Their experience at Xaverian was so positive they were hoping that the legacy would be passed on to their sons once they got to that age,

Greg Comella said he allowed Charlie the freedom to go wherever he wanted without pressuring him. Comella could afford to take a hands-off approach because there were external forces advising Charlie, namely his brother-in-law and former Xaverian teammate Brian Daoust as well as his cousins Jack and Nick Daoust, both of whom attended Xaverian.

“My dad was great about letting me make my choices,” Charlie Comella said. “I toured some schools, but I always thought it would be cool to come here. The facilities are great, I played in a flag football league here as a kid and the coaches were always great to me. It just felt like home.”

Henry Hasselbeck took a far different route to Xaverian. He spent some time in Nashville, returned to Massachusetts and attended the Fessenden School in Newton as an eighth grader. Several factors led to the younger Hasselbeck attending Belmont Hill as a freshman where he played several sports.

“Henry wanted to come here as a freshman,” Matt Hasselbeck said. “But we were living in Weston and with me traveling for work and my wife’s job, it was so much easier to get to Belmont Hill, plus he was playing hockey for the Junior Eagles and they practiced at Belmont Hill so it was an easy drive.”

One of the big reasons why Henry Hasselbeck started thinking about transferring stemmed from the fact that most of Xaverian’s games were on a Friday, whereas Belmont Hill plays on Saturday, a day when Matt Hasselbeck was traveling to New York for work.

“We loved Belmont Hill, it was an awesome experience, a 10 out of 10,” Hasselbeck said. “But I knew a lot of the people at Xaverian, they were super supportive of Henry’s decision to go to Belmont Hill. Right on down from Dr. (Jacob) Conca (the head of school), they were men of integrity.”

Leaving Belmont Hill was not easy for the younger Hasselbeck. The only thing that made the move easier was the fact that he was going to a school he was very familiar with.

“Belmont Hill was everything I could have asked for. Memories were made and character was formed,” Hasselbeck said. “It was not easy to say goodbye to Belmont Hill, but coming here has been an A-plus experience. The people were so welcoming, I made a lot of friends from so many different walks of life and we became brothers ready to compete on Friday night.

Al Fornaro graduated from Xaverian in 1978, and served as a longtime assistant coach at the school before taking over as head coach for Charlie Stevenson in February 2017.

“As young men, I didn’t know they were going to eventually become NFL players,” Fornaro said. “Greg had a plan from the start that he was going to go from high school to college to the pros. Matthew wanted the same things, but didn’t express it as much as Greg.

“Their sons are totally different from their dads. They are a little loosey-goosey, they are more extroverted as you can tell. They are great kids and you can tell that both of them had great upbringings.

“I tell Greg and Matt all the time that I wish they had more boys.”