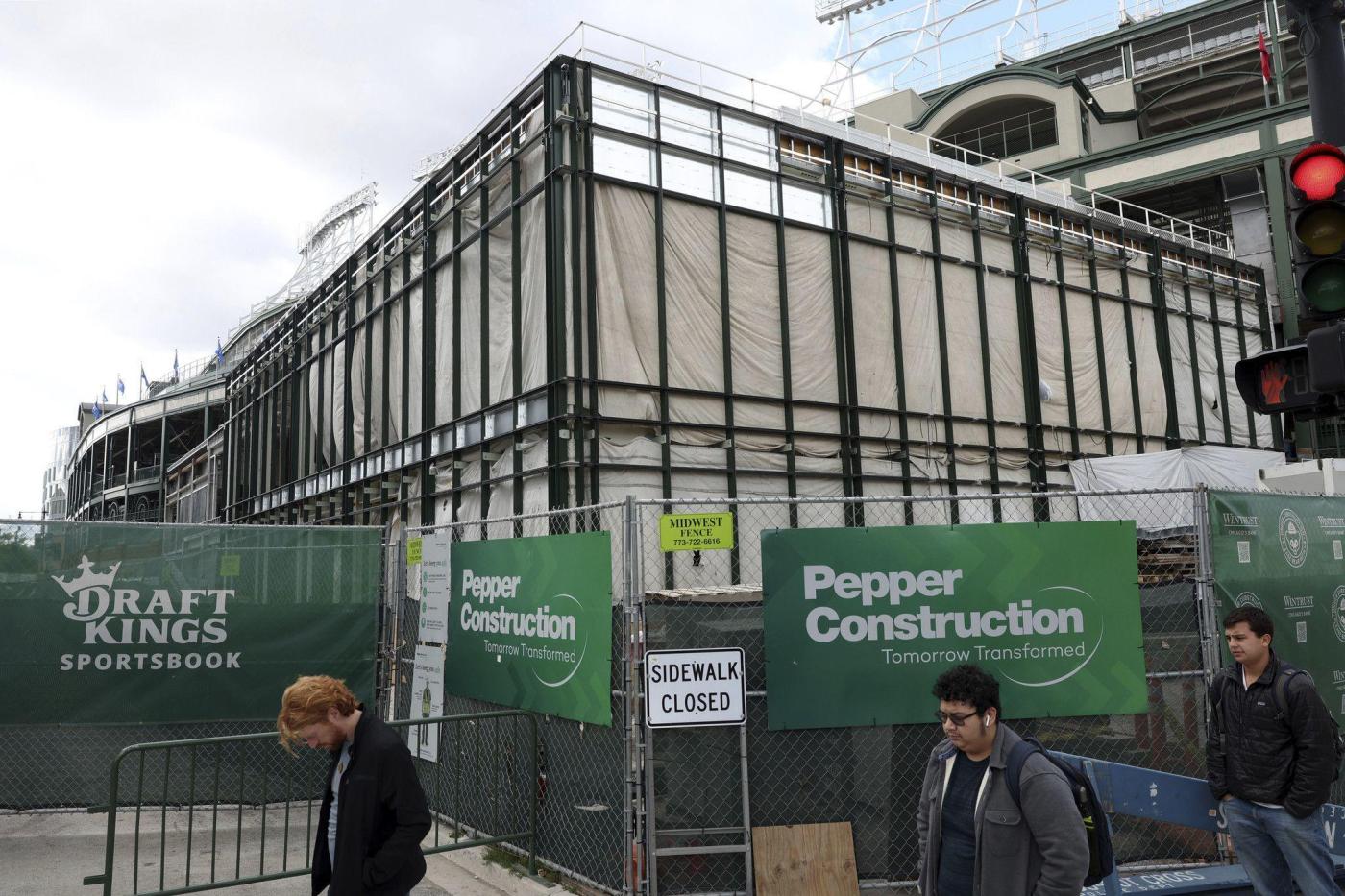 Living near Wrigleyville gives you a chance to see the daily goings on at the ballpark during the offseason.

It used to be a quiet time for Wrigley Field, with minor patchwork and small improvements to seating areas or the concourse. But since the early part of this century it has become one construction project after another, changing the 108-year-old structure on a near annual basis, for better or worse.

This winter it’s the DraftKings sportsbook annex, a three-story, 22,000-foot building being added to the right-field corner.

It’s sort of like attaching a bus shelter to the Picasso, but changes have come so fast at Wrigley the last decade that no one bats an eye. It’s the Ricketts’ ballpark, of course, and a smart business decision. Altering the ballpark’s iconic design for another lucrative revenue stream that should continue flowing whether or not the team is competitive is a no-brainer for Chairman Tom Ricketts, who repeatedly has said he “bought a private business, not a museum.”

Sportsbooks at stadiums soon will become commonplace. Sports betting ads dominate broadcasts, and teams’ announcers matter-of-factly disperse the odds of something happening during games. If there’s money being made off betting, sports leagues and owners obviously want their chunk.

“MLB is promoting these relationships,” economist Andrew Zimbalist told Forbes in 2021. “If more people are betting, more people are watching, and that raises TV revenue.”

You can’t begrudge the Cubs wanting to get more people watching — not to mention raising TV revenues — for a product that has been subpar the last two years. After the lowest attendance in a non-pandemic season since 1997, when the Cubs started 0-14, the team recently announced it was dropping season ticket prices by an average of 5%.

“People have a lot of choice in their opportunities and the things they want to go out and do in their lives,” Marquee 360 senior vice-president Cale Vennum told the Tribune. “And a lot of them are choosing to come to Wrigley Field, but we saw that there was an opportunity that we could decrease prices heading into next year.”

Naturally, any time the Cubs see an “opportunity” to take less money from their customers, Ricketts is going to jump on it. Having the second-highest average ticket prices, an 88-loss team and tons of empty seats in September surely didn’t factor into the decision. They’re just swell owners.

Watching the Cubs once was a habit for diehard fans, even when the season was lost in mid-May. But the selling off of star players, the exorbitant ticket prices and a distaste for the Ricketts family has combined to cure some of their long-time addiction.

It’s the price you pay when you operate an organization going through its second rebuild in a decade without a clear plan in place.

Meanwhile, the Tribune reported viewership for Marquee Sports Network has fallen 56% since its debut in 2020, which Crane Kenney, president of business operations, said was partially because of “headwinds” caused by pandemic and cord-cutting.

That sound you hear is president of baseball operations Jed Hoyer getting run over by the Crane Train.

Get to work, Jed, and gets those Marquee ratings back up.

Marquee obviously can’t do anything about the product on the field, but the network is part of the problem for the viewership decline. David Ross may become a good manager, but he hasn’t proven it yet despite the constant lauding of his job performance on the network. After a pregame interview with general manager Carter Hawkins this summer, we were informed the Cubs’ future was in great hands with Hawkins in the GM seat.

That’s still to be determined. Hawkins has been even more invisible a GM than Hoyer was under former team President Theo Epstein, so there’s no telling how much power he has had in the decision-making.

Either way, by constantly searching for the positives and downplaying the Cubs’ record, Marquee basically is a 24/7 infomercial for the owners. Maybe that always was the plan, but most Cubs fans I know prefer some objective criticism when the product is underperforming, as the Cubs have done the last two seasons.

Contrast that to NBC Sports Chicago, on which broadcasters not only criticized the team’s play when merited but studio analyst Ozzie Guillén often was the White Sox’s most vocal critic.

Still, Kenney is right about the ratings. No matter how many local Emmys he props up against his office wall, the network won’t be a real ratings success without a team that wins.

As we’ve seen this postseason, spending money helps get you into the playoffs. But once you’re in, an 87-win wild-card team like the Philadelphia Phillies has as good a chance as the team with the best record.

Hoyer has vowed to spend Ricketts’ money this offseason — while using the qualifier “intelligent spending” to avoid any misperceptions about just how far he will go.

The Phillies, who won Game 1 of the World Series Friday in Houston, made the decision in 2019 to sign Bryce Harper to a then record-breaking, 13-year, $330 million contract. He helped lift them to the World Series with a clutch, game-winning home run in Game 5 of the National League Championship Series against the San Diego Padres.

Would the Cubs make an even bigger financial commitment this offseason to a franchise-changing player like Aaron Judge? Or would that be an example of “unintelligent” spending? It’s Hoyer’s call to make for that elusive ratings fix.

Meanwhile, the turning of the ivy at Wrigley leaves the ballpark in its most beautiful state, with red, yellow, light green and purple ivy mixed in with the dark green leaves.