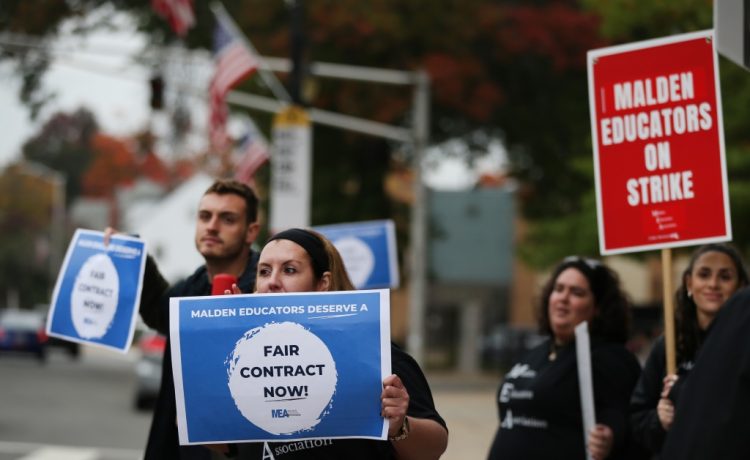 Schools in both Haverhill and Malden will remain closed Tuesday as teachers keep striking — even after the Essex Superior Court issued an order Monday compelling Haverhill holdouts to return to their classrooms.

Haverhill and Malden teachers declared strikes after marathon contract negotiations between the unions and school committees failed to reach agreements over the weekend.

The unions, which say the districts’ schools have been inadequately funded for years and are struggling to provide students quality education, are demanding key changes like wage increases, staffing supports and workload adjustments.

“It is also clear to the court that the Plaintiffs and, more particularly, the 8,000 students in the Haverhill school system whose interests are the responsibility of the school committee, will suffer immediate and irreparable injury if the requested temporary injunctive relief is not granted,” said Judge James Lang in his decision.

“What is happening to Haverhill public school students, teachers and the community is that we are being underfunded,” said Davis. “It is immoral. And at this point in time, Haverhill Public Schools teachers and the HEA has chosen to do what is moral over what is legal. Until a tentative agreement is reached, we will be on the picket lines.”

Both sides of negotiations maintained they were there to bargain in good faith. Tension between negotiators remained. The union complaining of city negotiators walking out around midday — calling out bad-faith “delay and distract tactics” — and city negotiators claiming the union was misrepresenting a pre-scheduled stop time.

“(Negotiators) feel that the Massachusetts Teachers Association has hijacked the negotiations process,” said Darcie Fischer of the firm negotiating on behalf of the city, Ellis Strategies. “And they’re making it very difficult to find common ground when the teachers.”

Though Davis said the union was willing to work “through the night,” negotiations paused after 6 p.m. and were set to reconvene Tuesday morning.

In Malden, which did not start negotiations until late in the day, the process continued later into the evening.

On the picket line outside of Malden High School — with a constant stream of cars honking support going by — morale remained high.

“By around 8:30 a.m., we had around 700 members on the picket line at all seven worksites, and we’ve had tremendous support from the community,” said MEA President Deb Gesualdo, noting the students, parents and community members honking, dropping off supplies or sending messages.

“We haven’t had a gym teacher,” said 8th-grader Hasan Freeman, standing on the picket line with his mother and eating the donut provisions. “It sucks.”

His mom, high school engineering teacher Ashley Freeman, said noted the district has around 80 teacher vacancies and the problem is worsening, leading to many students just stuck in study halls during school hours.

“We’re here because our schools are in crisis,” Freeman said. “Students’ education shouldn’t be determined by their zip code.”