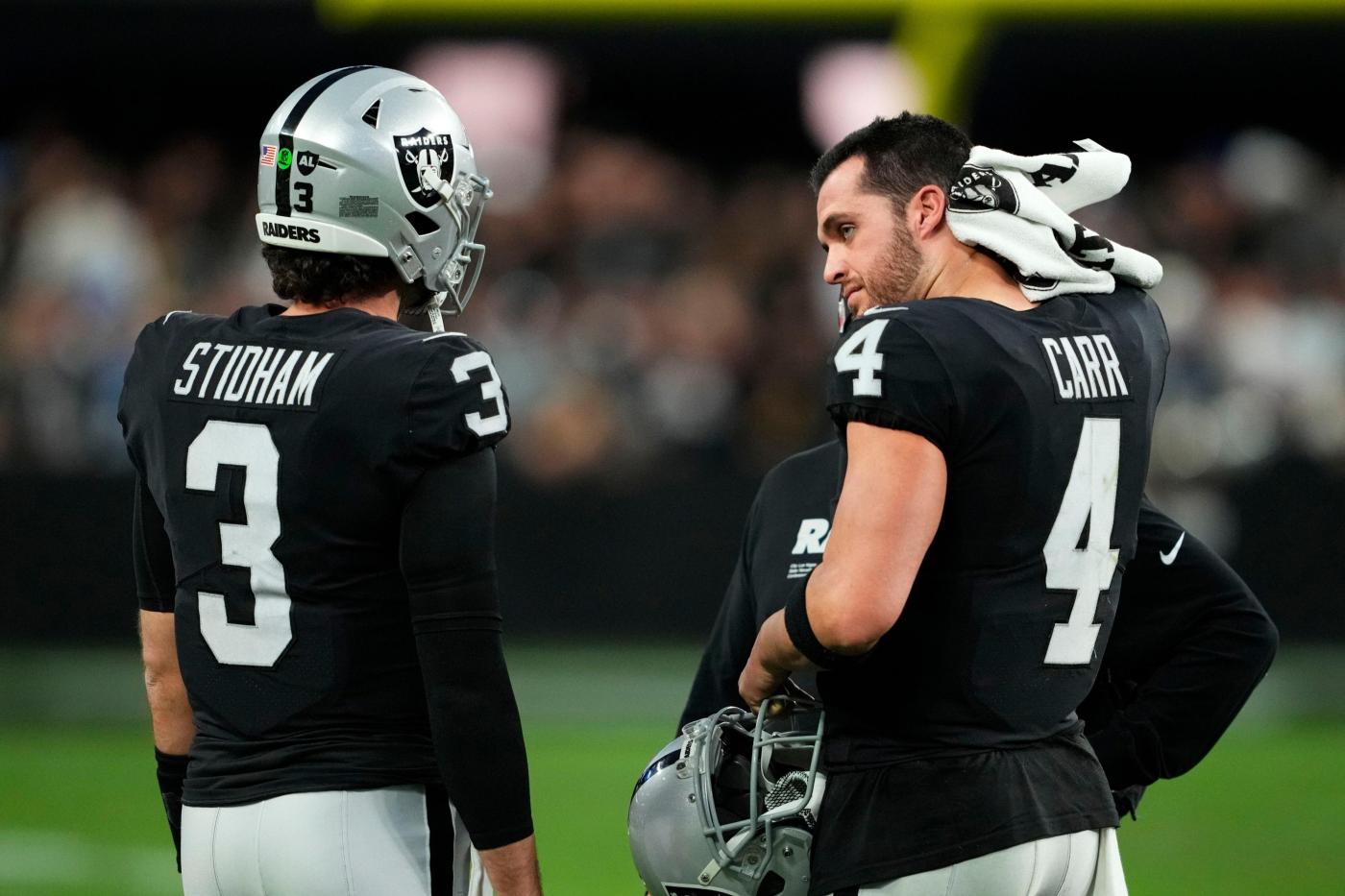 It seems as though the Jets aren’t the only ones with quarterback issues. These three teams will also have someone different under center in Week 17.

CARR PARKED ON THE BENCH

Josh McDaniels apparently has seen enough of Derek Carr this season. The 31-year-old will be on the bench for the Raiders’ two remaining games this season, McDaniels announced Wednesday.

Jarrett Stidham will take over and make his first career NFL start.

Carr has completed 60.8% of his passes while throwing for 3,522 yards, 24 touchdowns and a league-leading 14 interceptions this season for the disappointing Raiders.

During his nine-year career, the three-time Pro Bowler has compiled 35,222 yards and 217 touchdowns, but has only lead the Raiders to the playoffs once.

The Raiders are 6-9 in McDaniels’ first season as head coach. The long-time Bill Belichick assistant entered this season with high expectations due to bringing in Carr’s former college teammate Davante Adams — a two-time All-Pro wide receiver — on a five-year, $140 million deal. It’s safe to say, this season has not gone to plan.

WENTZ GETS THE CALL

Carson Wentz will return to the starting role in Washington as Taylor Heinicke has been relegated to the bench.

The Commanders have dropped two games in a row — including a crucial matchup against the Giants two weeks ago — which has made their final two games must-wins if they want to reach the postseason.

Heinicke originally landed the starting job in Week 7 after Wentz — the 2nd overall pick in the 2016 draft by the Eagles — went down with a finger injury. Heinicke has thrown for 1,859 yards, 12 touchdowns and six interceptions in nine games this season.

Wentz has struggled during his first season with Washington. The 29-year-old threw for 1,612 yards, 11 touchdowns and 6 interceptions while leading the Commanders to a 2-4 record.

The Commanders are 7-7-1 and are hoping to pull one last rabbit out of the hat in a last-ditch effort to make the playoffs. They finish against the Browns and Cowboys.

Tua Tagovailoa’s status for the Dolphins’ crucial matchup against the Patriots on Sunday is uncertain due to a concussion.

Tagovailoa suffered the injury in their loss to the Packers on Christmas. It is the 24-year-old’s second confirmed concussion of the season.

The former Alabama star first appeared to have suffered a concussion on Sept. 25 against the Bills. Controversially, he was back on the field just four days later against the Bengals where he was slammed to the ground again and was motionless on the ground for approximately 10 minutes before being stretchered off the field.

A joint review by the NFL and the players’ union after the Bengals game led to the league changing its concussion protocol.

Head coach Mike McDaniel told reporters that the team is operating with veteran Teddy Bridgewater as their starter moving forward.

Tagovailoa is in the midst of a career-best season. The lefty has hurled 3,548 yards, 25 touchdowns and just eight interceptions this season.

The Dolphins, losers of four straight, are 8-7 with a must-win game coming up against their division rivals this week.