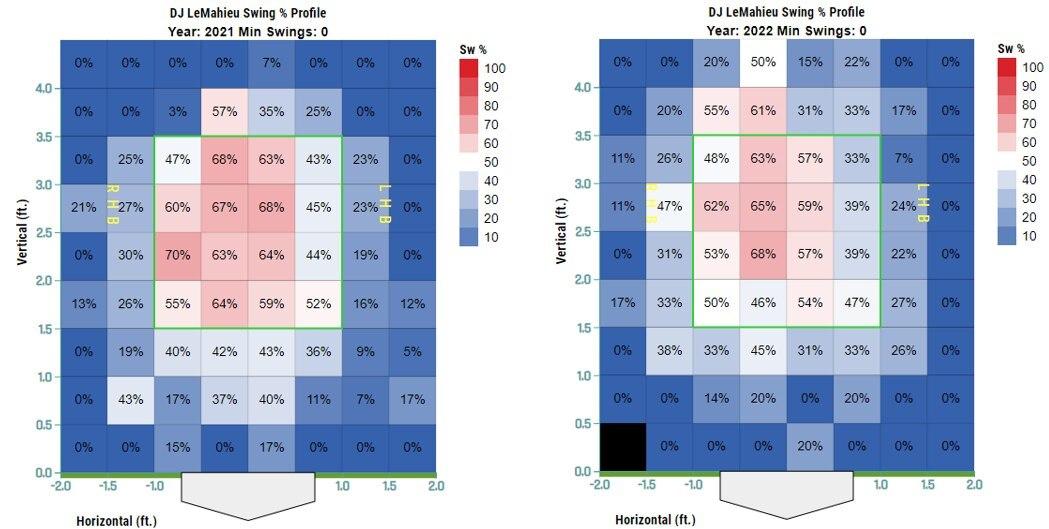 As of Thursday morning, there are four players in the American League with an on-base percentage of .370 or better, at least 40 walks and ten or more doubles.

One of them is Yordan Alvarez, the Astros’ latest wunderkind and strongest challenger to Aaron Judge in the fight for AL MVP.

Another is Jose Abreu, the former MVP and heartbeat of the Chicago White Sox who has done nothing but hit since coming over from Cuba eight years ago.

There’s also Yandy Diaz, the Rays’ infielder who, like Alvarez and Abreu, also hails from Cuba. He’s having the best year of his career and stands as the most surprising person in this group, though several people were ready to write off the fourth member during his down year in 2021.

That final hitter is DJ LeMahieu. While it may seem strange to marvel at a three-time All-Star who’s won two batting titles, the truth is that LeMahieu did not look like his normal self last summer, and with his season ending because of a sports hernia, nobody could be sure how he’d look upon returning.

LeMahieu, who celebrated his 34th birthday on Wednesday, has put all that skepticism aside. We can acknowledge right away that he’s not slugging the ball as much as the Yankees would probably like. He’s sixth on the club in extra base hits, behind several teammates who have made fewer plate appearances than he has. The power that produced 26 homers and 102 RBI in 2019 is likely never coming back, and guess what? That’s perfectly fine.

With his average exit velocity and barrel percentage lower than they were last year, LeMahieu has found the path to more singles. His batting average entering Thursday’s game against the Reds is two points higher than it was last year (.270), and he’s made significant strides in on-base percentage, wRC+, walk rate and even slugging percentage.

The latter had a lot of room to shoot upward, as his slugging percentage cratered to .362 in 2021 after two years above .500. But with all of these improvements, plus his sturdy defense at all three infield spots he occupies, LeMahieu has already accumulated more Wins Above Replacement (2.4) in 79 games than he did in 150 last year (2.0).

It seems as though LeMahieu took stock of everything he didn’t like about last season and decided the main thing he needed to do was get on base in whatever means possible. That has led to the highest frequency of walks in LeMahieu’s 12-year career. He’s now taking a base on balls in 13.1% of his plate appearances, making his career 8.1% clip look like something he’s extremely comfortable leaving in the past.

LeMahieu has adapted the simplistic yet effective approach of only really swinging at pitches right over the middle of the plate. Most of LeMahieu’s swings at pitches inside the strike zone are now at balls in the very center. When he gets a ball over the middle, he’s swinging 68% of the time, and that’s led to a .429 batting average. On pitches slightly elevated that are also right down Broadway, he’s swinging 65% of the time and hitting a prodigious .500. In concert with that, the contact-hitting machine is also laying off pitches at the bottom of the zone. His swing percentage is down for every single portion of the strike zone’s lowest level, pitches that typically lead to harmless grounders. With an overall swing percentage that’s also down — he’s leaving the bat on his shoulder on 60% of the total pitches he sees, the highest rate of his career — LeMahieu has clued in on just the pitches he knows he can handle. Sometimes reverting back to the basics is all it takes.

LeMahieu is also the only guy in the American League who has played at least 15 games at first base, second base and third base. Aaron Boone’s ability to mix and match his infield based on matchups, player rest and his designated hitter on a given day has been a low key component of this great season. Josh Donaldson is equally loved by traditional and advanced fielding metrics. He’s yet to make a fielding error (only four throwing errors) and also leads AL third basemen in Defensive Runs Saved and Outs Above Average. Of course, he is also 36 years old, the oldest AL player to see at least 300 innings at the hot corner this year.

Having LeMahieu to insert as needed has allowed Donaldson to stay fresh. Donaldson has made 19 starts at DH, second-most on the team behind Giancarlo Stanton, and LeMahieu has also taken 22 starts from Gleyber Torres at second base. While impossible to quantify, those days of rest have played some part in Torres’ refreshingly strong year at the plate after two puzzlingly weak ones.

The ripple effects of LeMahieu’s impact are a fun subplot on this memorable Yankee team. LeMahieu is the every-down running back who also catches passes, the consistent offensive player who also guards the other team’s best player, the midfielder who goes box to box. He’s back to the player everyone knew he could be, and with a home in the leadoff spot again, he’s the head of a snake that’s scored a league-leading 460 runs.