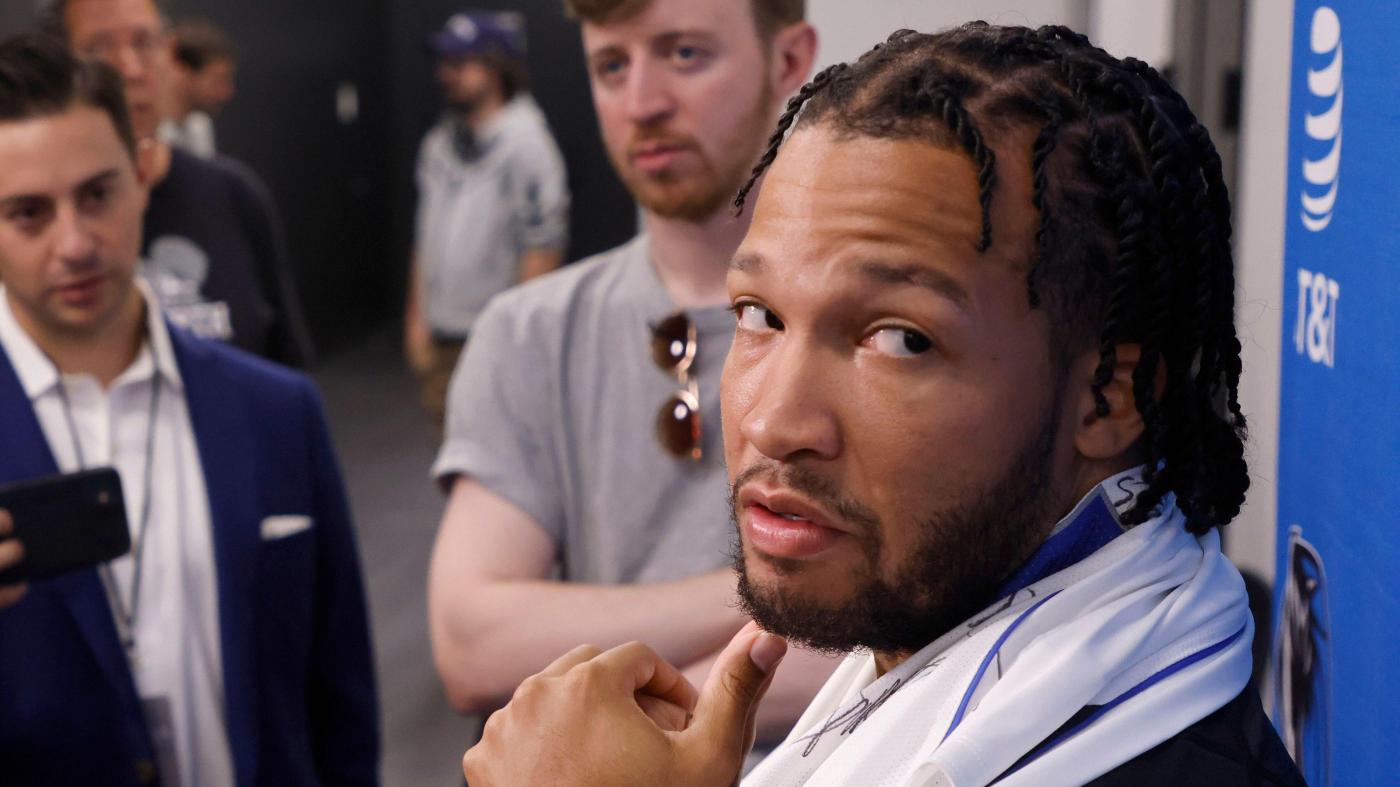 A year ago, after a second consecutive season extended by the pandemic, the Miami Heat stood poised for the delayed start of NBA free agency on Aug. 2.

Or, in the view of the NBA, a year ago, after a second consecutive season extended by the pandemic, the Heat already stood knee deep in the process.

No sooner had word spread of the Heat’s sign-and-trade agreement with the Toronto Raptors for Kyle Lowry minutes after that Aug. 2, 2021, opening bell of free agency then the league stood T’d off. T for tampering.

Five days later, it was confirmed that the NBA indeed was investigating. Four months later, the Heat were docked a second-round pick in June’s draft.

The Heat’s reaction? “While we disagree, we accept the League’s decision. We are moving on with our season.” With Lowry in place the Heat finished with the No. 1 seed in the Eastern Conference, one victory from a spot in the NBA Finals.

Now, a year later, the question is whether the NBA will be uniform in its approach to what is considered “gun jumping,” making free-agency overtures ahead of the allowable window.

Already, as ESPN reported, the NBA is looking into the creative — and dare we say, pre-planned? — approach by the Philadelphia 76ers that helped them swiftly lock up former Heat power forward P.J. Tucker at the very start of free agency. That well may have involved some shenanigans with the free-agency deal of James Harden.

But Exhibit A of “gun jumping” this year stands as the New York Knicks, who could not have been more transparent with their courtship of Dallas Mavericks free-agent guard Jalen Brunson, from Knicks brass attending one of his playoff games courtside, to New York’s hire of Jalen’s father, former NBA guard Rick Brunson, as a coach in June, to Jalen’s representation by Sam Rose, son of Knicks President Leon Rose.

Even Mavericks owner Mark Cuban shrugged it off during NBA summer league.

“No, they were perfect. I saw nothing wrong at all,” Cuban said on Sirius/XM NBA Radio, sarcasm in his tone. “That’s just the business. That’s just the way it works. You know, that’s not my job to determine. That’s up to the NBA. It is what it is. It’s done.”

Based on the Knicks’ desperation to get a deal done with a free agent, any free agent, being docked a second-round pick likely will be viewed as a cost of doing business. Remember, this is a team that was in the 2010 bidding for Chris Bosh and LeBron James and came away with Amar’e Stoudemire. It’s a team that decided Brunson was worth $104 million over four years.

The Heat weren’t alone in being docked a second-round pick last summer, with the Chicago Bulls hit with the same sanction for the timing with their sign-and-trade free-agency transaction with Lonzo Ball. Lacking a second-round pick in this past June’s draft, the Bulls remain on the hook for that penalty.

So are the Knicks next in the penalty box, even ahead of the 76ers? Unlike the Heat and Knicks last summer, the agreement with Brunson was straight up, no need for involvement with a third party, as the Heat required with the Raptors for Lowry or the Bulls with the New Orleans Pelicans for Ball.

The Heat, in fact, last month lost Tucker even before the Knicks’ agreement with Brunson became clear minutes after the 6 p.m. June 30 start of free agency. For days, it was known that Tucker had an offer in hand of the $10.5 million mid-level exception from the 76ers, at a time the 76ers still had significant work to do with Harden in order to clear room for Tucker under the hard cap.

The reality now, as it was with the Heat and Bulls last summer, is that if the extra cost for such pre-arranged agreements is a forfeited second-round pick, so be it. The Heat assuredly would have tossed in such a pick to close a Lowry deal last summer, as would have the Bulls with Ball. And the Knicks’ desperation, as evidenced by the largesse with Brunson’s contract, showed New York likely would have, as well. Perhaps that sanction hits the 76ers, as well.

As it was, this year’s draft was reduced to 58 selections, with the Milwaukee Bucks docked a 2022 second-round pick for previous free-agency malfeasance in 2021 with Bogdan Bogdanovic.

To the league office, such is considered punishment.

To the league’s teams, it is the cost of doing business.

So the Knicks and 76ers next?

Or did tampering fatigue again set in after the Heat and Bulls got clipped a year ago?

THE ROADBLOCKS: For those still unclear about trade permutations for Kevin Durant and who the Brooklyn Nets can take back, it comes down to what the NBA terms the Designated Rookie Extension. Basically, you can have up to two such players on your roster at the same time, but only one who has been acquitted via trade. For the Heat, Bam Adebayo falls under that category, with possibly (not not as likely) Tyler Herro next. Because the Nets acquired Ben Simmons while he is under such a deal, they therefore cannot acquire such a player while Simmons still is on their roster. The current list, according to The Ringer: Zion Williamson (New Orleans), Ja Morant (Memphis), Adebayo (Miami), Devin Booker (Phoenix), Luka Doncic (Dallas), Joel Embiid (Philadelphia), De’Aaron Fox (Sacramento), Shai Gilgeous-Alexander (Oklahoma City), Jamal Murray (Denver), Donovan Mitchell (Utah), Simmons (Brooklyn), Michael Porter Jr. (Denver), Jayson Tatum (Boston), Karl-Anthony Towns (Minnesota), Andrew Wiggins (Golden State) and Trae Young (Atlanta).

BACK AT IT: Having returned to his day job, Philippines coaching legend Tim Cone reflected on his time with the Heat at summer league and the lessons he hopes to export. “These are things I’m wrestling with right now, because I have been exposed to some new things, and I certainly like to try some of them out,” he said, having stepped away from his team’s season to work with the Heat earlier this month. “I wanted to observe everything I could possibly do, but I also did not want to be intrusive and get in the way, so it was also a delicate balance trying to do that.” Cone worked Heat summer league at the invitation of Heat coach Erik Spoelstra, who is of Filipino descent. Next year, the Oregon-born 64-year-old will be coaching against Spoelstra and Team USA in the World Cup, with the Philippines among the host nations. “It’s indescribable how great it was,” Cone said back in the Philippines of his Heat experience. “I don’t have words for it.”

GLUE GUY: When it comes to Heat “glue guys” over the years, James Posey arguably met that definition as much for the 2006 championship Heat as anyone on the Heat rosters that won NBA titles in 2012 and ‘13. Now the journey of enlightenment continues, with the former Heat forward being named a Washington Wizards assistant coach. Having gone on to also win an NBA title in 2008 with the Boston Celtics and then in 2016 as a Cleveland Cavaliers assistant, Posey arrives to Washington after spending last season as an assistant coach for the University of Virginia women’s team under Hall of Famer Tina Thompson. He previously spent five seasons coaching in Cleveland. “We will be able to lean on his playing and coaching experiences to help the development of our players,” Wizards coach Wes Unseld Jr.

BOTH SIDES: The Heat wound up with placements both on Spotrac’s list of best and worst offseason free-agent signings. The agreement with forward Caleb Martin ranked tied for fifth (with twin brother Cody Martin re-signing with the Charlotte Hornets). Of Caleb Martin’s deal (three years, $20.5 million at the taxpayer mid-level exception), the salary-driven website noted, “Miami still got great value for the Taxpayer MLE amount for a player who should have played more in the Eastern Conference Finals.” On the list of worst signings, the two-year, $9 million deal of backup Heat center Dewayne Dedmon was listed at No. 8 because, “Dedmon seems like a minimum salary big man at this point. The Heat couldn’t even play him by the end of their playoff run. Omer Yurtseven might already be better as a backup for Bam Adebayo.” Interestingly, the 76ers’ signing of Tucker from the Heat for $33 million over six years was No. 7 on the worst list, with it noted, “that $11.5 million player option in Year 3, when Tucker will be 40 years old, already looks really bad.”

$10.5 million. Payment received by each of the 23 teams, including the Heat, that remained below last season’s luxury-tax, the figure a percentage of the overage of the seven teams that operated above the tax.