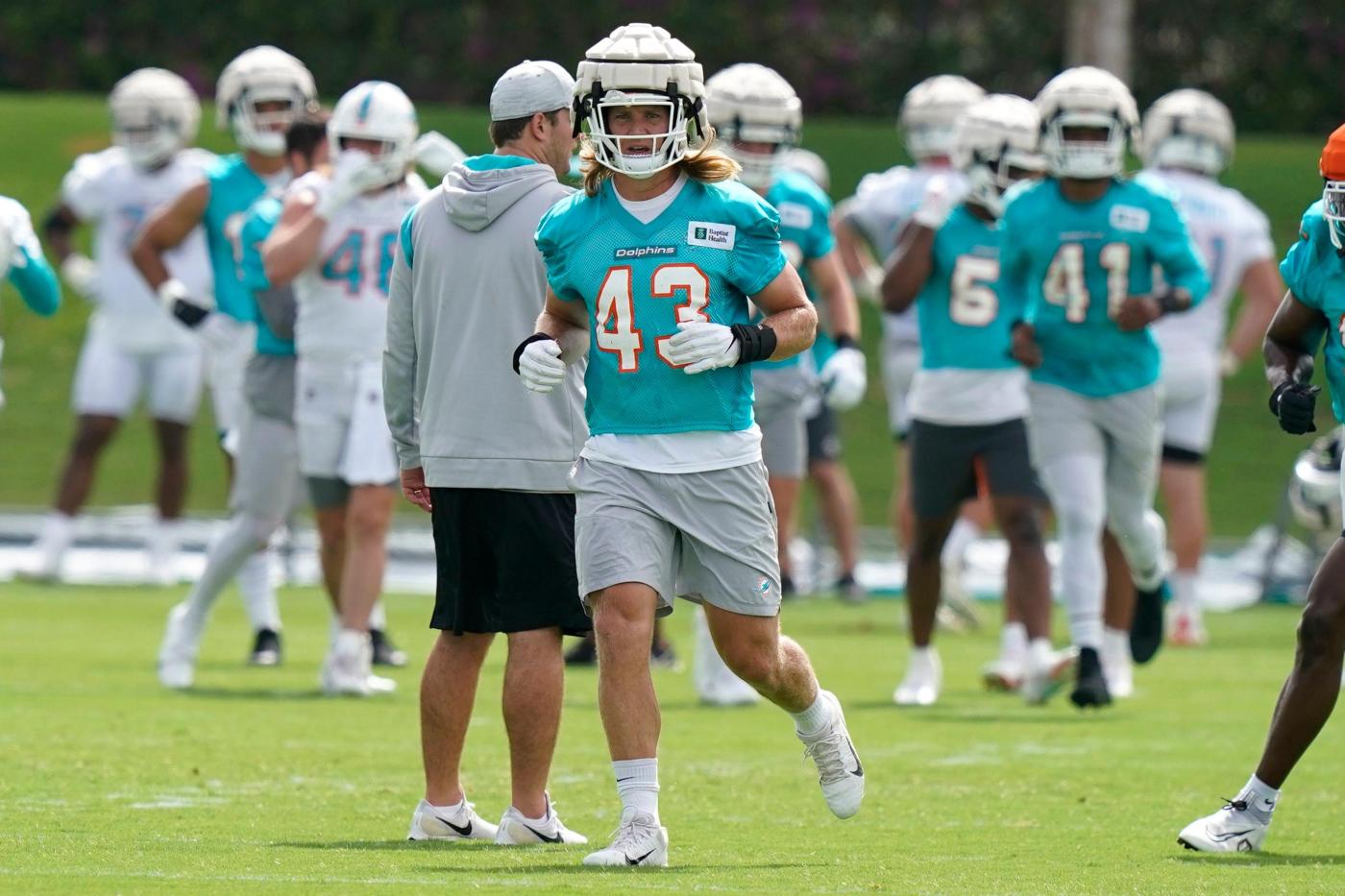 Miami Dolphins outside linebacker Andrew Van Ginkel was back practicing with the team Monday after having his appendix removed about two weeks ago.

Van Ginkel appeared to be running well as he went through a pair of drills observed during a brief media viewing portion of Monday’s practice ahead of the Dolphins’ regular-season opener against the New England Patriots on Sunday.

Van Ginkel began missing practices on Aug. 23, at the start of the week of preparation for the preseason finale against the Philadelphia Eagles. Dolphins coach Mike McDaniel said later that week it was because of his appendix removal, but he indicated he didn’t fear it would be a long-term issue.

Van Ginkel has been a key edge presence for Miami each of the past two seasons. He has started 25 games between 2020 and 2021 and totaled 9 ½ sacks over the two campaigns, adding another sack in limited playing time as a rookie in 2019. Van Ginkel has 134 career tackles over his three NFL seasons since being a fifth-round pick of the Dolphins out of Wisconsin in the 2019 draft.

His role could become more rotational this season as the team added three-time Pro Bowl selection Melvin Ingram, who projects to start opposite Jaelan Phillips at outside linebacker. Miami also recently added veteran edge defender Trey Flowers to form a deep unit that is versatile on the edge.

Dolphins third-string quarterback Skylar Thompson was the only player on the active roster not seen at Monday’s session. Miami also had cornerback Nik Needham and fullback Alec Ingold running on the side while drills were going on.

Dolphins receiver Jaylen Waddle, cornerbacks Xavien Howard and Keion Crossen and safety Eric Rowe — all who have missed practice in recent weeks — were seen at Monday drills and appeared to be practicing.

Waddle was seen participating in drills. He has been slowly progressing back from an undisclosed injury, which McDaniel has deemed a preventative measure, over the past three weeks with a compression sleeve on his right leg. Waddle was back at practices over the previous week but on a limited basis, mainly just stretching.

Beginning Wednesday, the Dolphins will be releasing league-mandated injury reports for practices during game weeks.

The Dolphins bypassed picking up one of a number of veteran former Pro Bowl cornerbacks in the week between the end of the preseason and start of the regular season, despite having a need at the position with starter Byron Jones out at least the first four weeks on the reserve/physically-unable-to-perform list.

Miami will instead, behind three-time Pro Bowler Xavien Howard and starting nickel cornerback Nik Needham, will lean on a reserve group that includes Keion Crossen, Noah Igbinoghene, undrafted rookie Kader Kohou and safety Elijah Campbell, who has also played cornerback. The Dolphins signed veteran Justin Bethel, but he is predominantly a special teams contributor and is initially being listed as a safety on the team’s roster.

“They’re very veteran to us in regard to their capabilities, their strengths, weaknesses and so on,” McDaniel said of his cornerback group on Monday. “Because we were going through some injury stuff during this offseason, we actually got more opportunity to really coach and evaluate and see our young nucleus of defensive backs, which was the driving force of our move to make no move.”

Among veteran cornerbacks available were Joe Haden, Josh Norman, Chris Harris, Xavier Rhodes and Janoris “Jackrabbit” Jenkins. General manager Chris Grier said last week the Dolphins would look into the market at the position — but not with added urgency.

Added McDaniel on Monday: “We were actually pretty fortunate in the process to get those opportunities to kind of evaluate all those guys so closely, getting them to see every single defensive structure, coverage, responsibility, and then even getting extensive time in the preseason. There was a lot of value that the collective group really offered us. And then you weigh that against who’s out there and decide if you really want to go down that road and for us, we felt like we had enough NFL players that were best served, not doing so.”