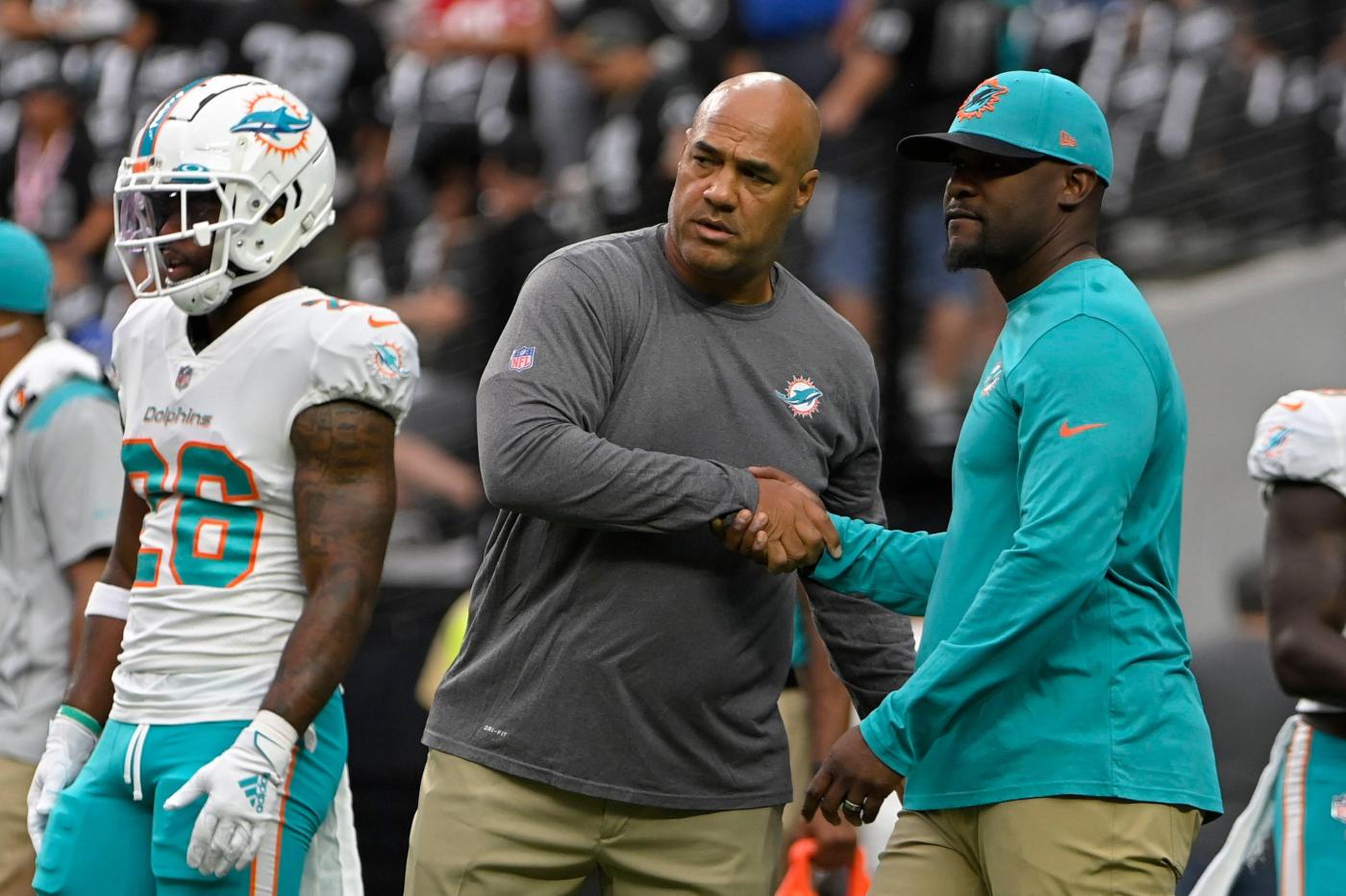 After the bombshell NFL release on Tuesday of Miami Dolphins investigation findings and discipline handed down to the team after it was found to have illegally tampered with quarterback Tom Brady and coach Sean Payton — but did not intentionally lose games — the Dolphins took the approach of moving forward Wednesday.

“It’s not a distraction to me,” said running backs coach Eric Studesville ahead of the session. Offensive assistant coaches spoke to reporters, and Studesville was the one holdover from ex-coach Brian Flores’ tenure who is still with the offensive staff.

Studesville said new coach Mike McDaniel didn’t address the topic with the team on Wednesday morning, maintaining as much of a normal sense of possible at team facilities.

“We’re getting ready for practice [Wednesday],” Studesville said. “All our focus is on the stuff we got to do here.”

As an assistant coach who was with the team during the 2019 season, when Flores alleged that Ross pressured him and offered financial incentive to tank to improve draft positioning, Studesville said none of that talk ever reached him.

“To win football games and prepare and get ready to go. That’s how it’s always been,” he said of the Dolphins’ approach down the stretch of the 2019 season. “That’s what I owe the game, is that, every time we get a chance to go out, is to compete and do our best. There was never anything other than that expressed to us or to me.

“This is not how we’re wired. None of that was ever said.”

As far as the tampering violations the investigation found while Brady and Payton were with the Patriots and Saints, respectively, Studesville said he wouldn’t have been involved in that pursuit.

Still a member of the Dolphins organization but having a relationship with Flores, does Studesville wish the split could’ve gone more amicably?

“There’s change in this league all the time,” he said. “Coaches, players, organizations, everything, that’s part of this league, that’s part of what we go through in life, so you figure out and navigate those things as you go through them, you deal with them case by case and day by day, that’s what it is. That’s life. And that’s one of the great things that football does, it helps prepare you for those moments where you’re going to have to transition.”

Left tackle Terron Armstead, who has been on and off the practice field early in camp, also took a load management day on Wednesday.

Hill, while an established veteran with six Pro Bowls under his belt in six seasons, has still been seen running and practicing hard with a high volume of reps in team drills with his new team after getting traded to Miami from the Kansas City Chiefs. Edmonds, too, has hit holes with vigor in the running game as he transitions to the wide-zone scheme from playing mostly in the inside-zone throughout his career.

The Dolphins activated defensive back Elijah Campbell of the non-football injury list on Wednesday.

Campbell played in seven games with the Dolphins last year, totaling two special teams stops after being awarded to Miami off waivers ahead of the 2021 season. He was on the non-football injury list since the start of camp.