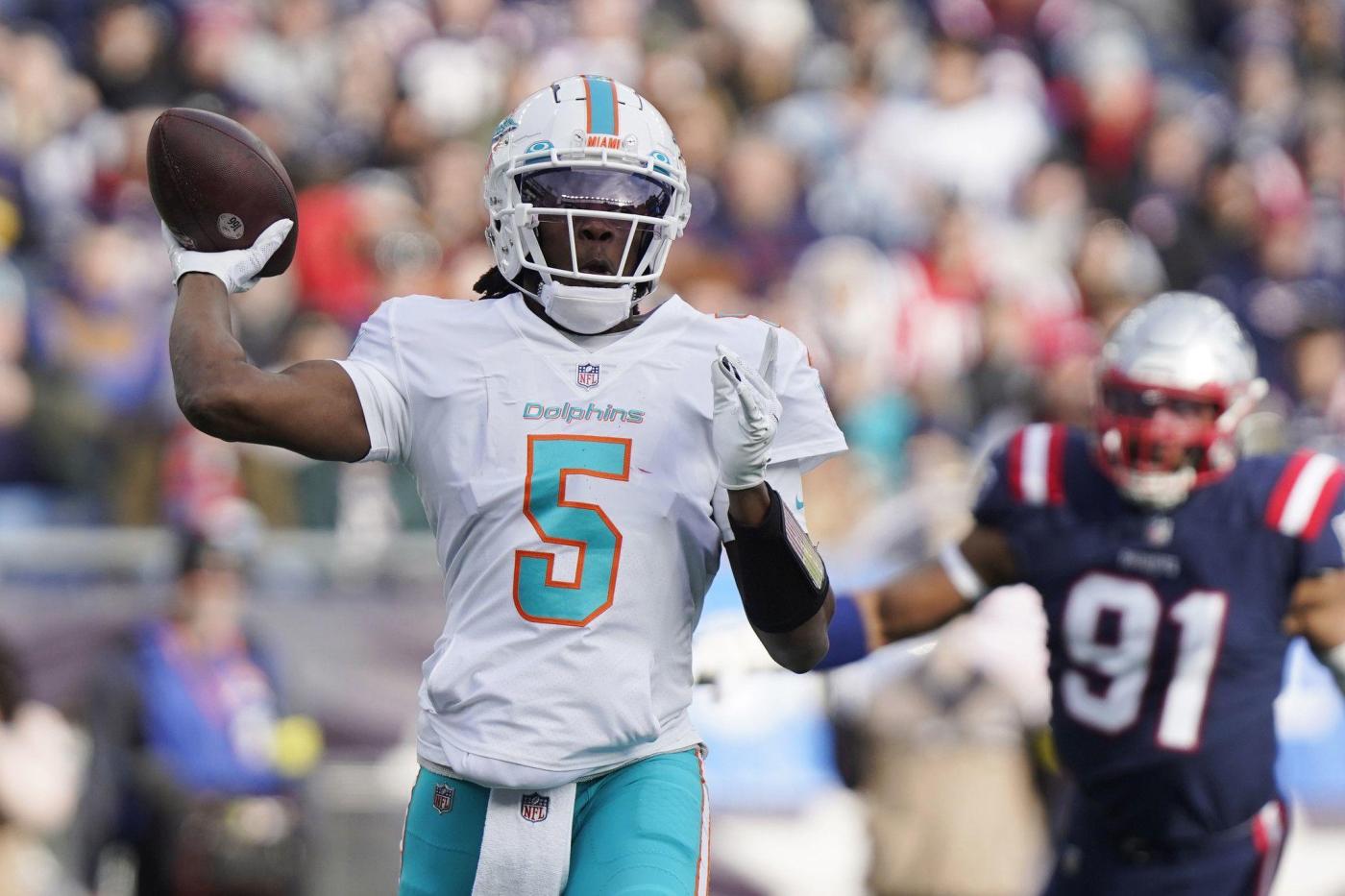 The Miami Dolphins are one loss away from what could be the franchise’s worst collapse in its history.

Down their starting quarterback, Pro Bowl left tackle, Pro Bowl cornerback and standout edge rusher that was a prized trade deadline acquisition, the Dolphins could not remain in control of its playoff fate on the road against the division rival New England Patriots.

The Patriots made game-changing plays in the second half with their defense, knocked out Miami backup quarterback Teddy Bridgewater and held on for a 23-21 win over the Dolphins on Sunday afternoon at Gillette Stadium.

Miami (8-8), back at .500 on a five-game losing streak, now needs a win in its finale against the New York Jets and a Patriots loss at the Buffalo Bills in Week 18.

New England (8-8) has now leaped Miami for the AFC’s seventh seed and final wild card spot, which it can seal in Orchard Park next week.

The Patriots scored with their defense, as they often do, late in the third quarter when Bridgewater, playing for Tua Tagovailoa as he recovers from a concussion, was intercepted by New England safety Kyle Dugger. Dugger returned it 39 yards for a touchdown that put the Patriots ahead, 16-14, after Nick Folk’s missed extra point.

Bridgewater exited after the play with a finger injury on his right, throwing hand that either occurred on the throw before, when his hand hit the helmet of Patriots pass rusher Josh Uche or when he tried to bring down Dugger near the goal line on his return.

Rookie quarterback Skylar Thompson went in for Bridgewater, and he was intercepted by Jonathan Jones on a pass that was behind receiver Tyreek Hill, ricocheted off Hill’s hand and popped up into the air near the sideline.

Thompson finished 12 of 21 for 104 yards, a late touchdown to tight end Mike Gesicki and the earlier interception. Bridgewater exited after going 12 of 19 for 161 yards, a touchdown and an interception.

Patriots quarterback Mac Jones, who earned his first win against Miami in four tries, put New England up by two possessions when he threw a 1-yard touchdown to Jakobi Meyers with 4:37 remaining. Jones was 20 of 33 for 203 yards, two touchdowns and no interceptions.

Thompson’s touchdown to Gesicki got Miami to within two points, but the Patriots recovered the onside kick to seal their victory.

The Dolphins appeared in control when they broke a 7-7 halftime tie with Bridgewater flipping to running back Raheem Mostert for a 2-yard touchdown early in the third quarter, finishing off a drive that began with exceptional field position at the New England 41-yard line.

The Patriots crept to within four, 14-10, with a 49-yard field goal from Folk before Dugger’s defensive score, which marked his third of the season, New England’s seventh overall and fourth consecutive week with one.

On each team’s first drive Sunday, there were downfield passes near a sideline that were close calls. New England got the call in its favor each time. After the Dolphins’ deep shot from Bridgewater to Hill was called incomplete, a 24-yard connection from Jones to Thornton was deemed in, even after a McDaniel challenge. Miami also had cornerback penalties of pass interference from Keion Crossen, who was starting with Xavien Howard out, and defensive holding by Kader Kohou on the series.

The Dolphins responded with a 13-play, 75-yard drive that was capped by a Hill rushing touchdown on a backward pass from Bridgewater that made it a rushing score, officially. Miami kept the series going with a fourth-and-1 conversion by running back Jeff Wilson, which followed a Patriots’ running-into-the-kicker penalty on a punt that followed a false start on an original fourth-and-1 in Dolphins territory.

Dolphins kicker Jason Sanders missed a 51-yard field goal attempt in the second quarter. Miami came up empty on a chance to break a 7-7 tie after Bridgewater threw behind an open Jaylen Waddle for an incompletion.

The Dolphins’ finale at Hard Rock Stadium against the Jets is yet to have a kickoff date and time between next Saturday and Sunday.