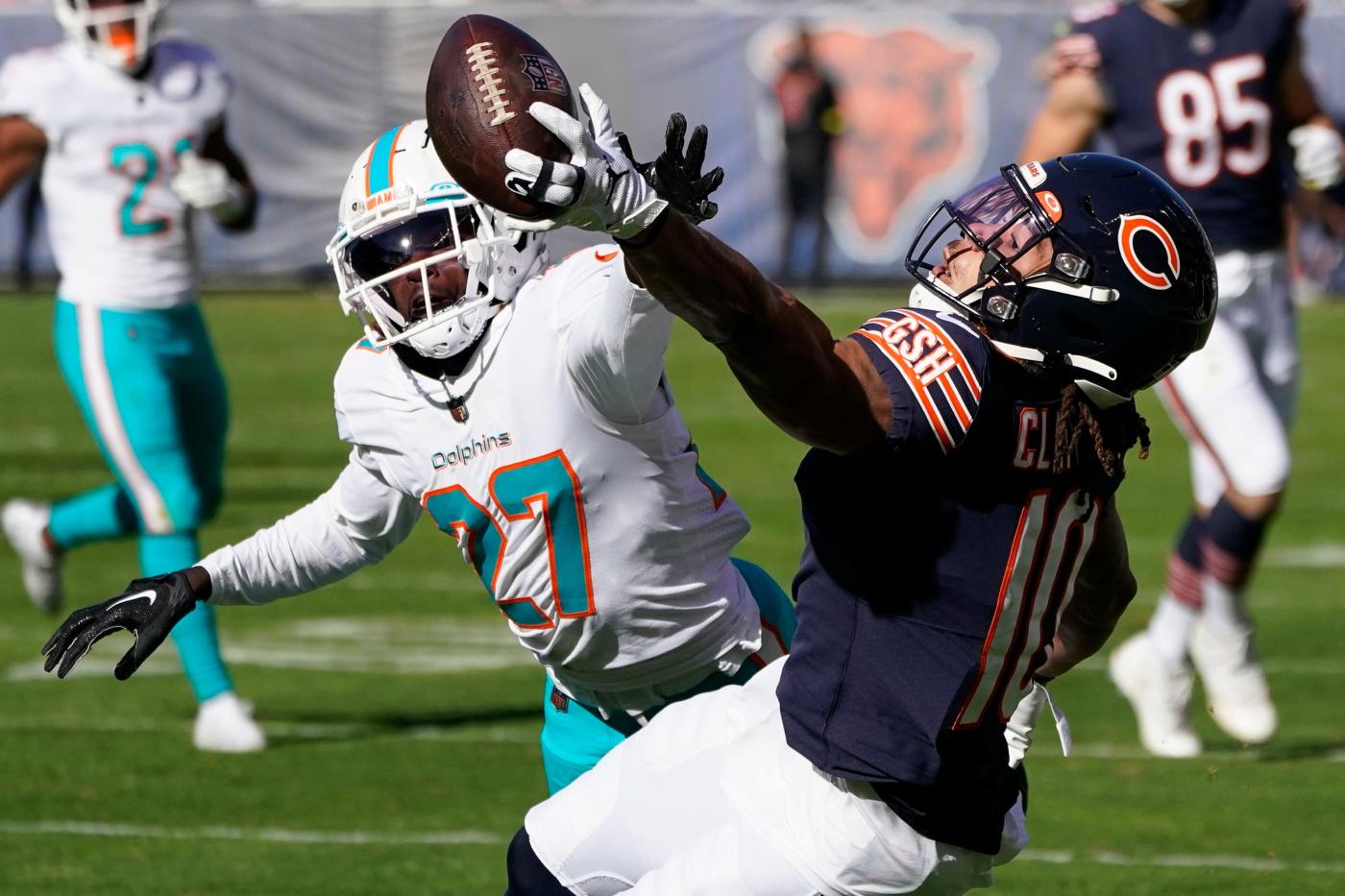 It was a duel between two hot-shot young quarterbacks that came down to the defensive stops at the end.

As Tua Tagovailoa and Justin Fields matched each other stride for stride, the defenses that looked like they couldn’t stop either quarterback stood up. The Miami Dolphins held on late to edge the Chicago Bears, 35-32, on Sunday afternoon at Soldier Field.

It has been a season of threes in the first nine games for Miami (6-3). The team is now on a three-game winning streak, which it also started the year with, with a three-game losing streak sandwiched in the middle.

Tagovailoa finished 21 of 30 for 302 yards and three touchdowns, following up what many called the best game of his career the week prior in a win at Detroit. Miami is now 6-0 this season in games Tagovailoa starts and finishes and has won 12 of the last 13 such cases dating back to last season.

Fields, the second-year Bears signal-caller, had 123 yards passing with three touchdowns, plus a whopping 178 yards rushing and a long score on the ground. Fields’ rushing total was an NFL record for a quarterback in a regular-season game.

The combination of Tyreek Hill and Jaylen Waddle came through once again for Miami. Hill had seven catches for 143 yards, and Waddle went for 85 yards on his five receptions. Each scored a touchdown.

The Dolphins, leading 35-32, had a nearly costly sequence in the fourth quarter where they burned two timeouts ahead of third-and-2 and then fourth-and-1 and turned the ball over on downs. Tagovailoa threw incomplete into the ground with tight end Durham Smythe open in the flat for the conversion.

The Miami defense, though, after all the trouble it had getting Fields down, came up with a critical sack of Fields from Melvin Ingram to lead to a stop.

Tagovailoa then misfired again on a vital third-and-11 where Waddle had separation on Bears cornerback Jaylon Johnson, but he underthrew it, allowing Johnson to come up with the deflection.

On Chicago’s final chance, Fields threw to Equanimeous St. Brown on fourth down, but they couldn’t connect. It was kneel-downs from there for Tagovailoa.

After failing to extend their lead at the end of the half due to some questionable clock management and a missed field goal, the Dolphins breezed right through the Chicago defense on the opening possession of the second half.

Chunk plays of 22 yards on a pass to Hill, Jeff Wilson runs of 28 and 7 yards and, finally, an 18-yard touchdown from Tagovailoa to Waddle got Miami into the end zone in four plays and 75 yards.

But the Bears responded quickly with Fields flashing his exceptional open-field running ability for a 61-yard touchdown, the longest quarterback run in Chicago’s long history. The Bears made it a 3-point game, 28-25, early in the third quarter after a successful two-point conversion.

Wilson Jr., the new Miami running back, scored his first touchdown in his new colors with 6:02 remaining in the third quarter, diving for the end zone for a 10-yard receiving score. Chicago again answered with tight end Cole Kmet’s second receiving touchdown, a 4-yard score.

Miami scored touchdowns on the ground, through the air and on special teams in the first half.

Jaelan Phillips blocked a Chicago punt with his chest, and fellow outside linebacker Andrew Van Ginkel took it 25 yards into the end zone for a touchdown. Tagovailoa found Hill on a quick out for a 3-yard touchdown, and Raheem Mostert punched in a 1-yard rushing score.

The Bears had leading receiver Darnell Mooney beat Dolphins cornerback Xavien Howard for a 16-yard touchdown late in the first half, and early in the second quarter, Kmet scored his first touchdown, 18 yards on a throw to the flat.

The Dolphins, after back-to-back road games in the NFC North, now stay home through the end of November. They have the Cleveland Browns next, followed by their bye week and the Houston Texans on Nov. 27.