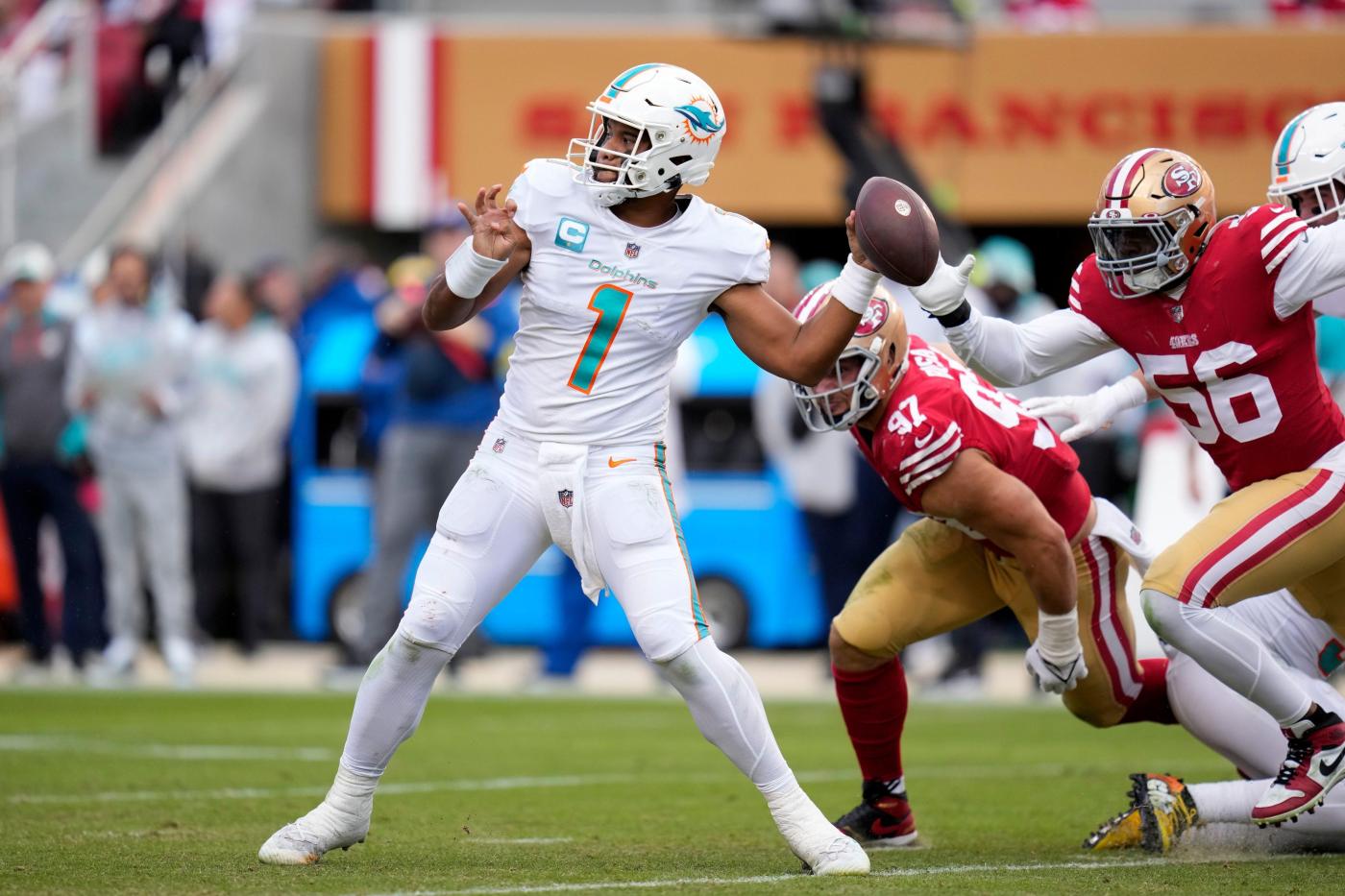 The pupil could not top the mentor, even as the mentor lost his starting quarterback.

It went from a win that would be difficult to pull off on the road against a really good team to one that felt like the Miami Dolphins should get — once the San Francisco 49ers lost Jimmy Garoppolo — and finally a comeback Miami couldn’t complete with an ugly ending.

With Dolphins quarterback Tua Tagovailoa mostly shaky and 49ers backup Brock Purdy stepping up, Miami ultimately did not secure a victory for coach Mike McDaniel against Niners coach Kyle Shanahan, whom McDaniel spent 14 years under with different roles on different teams throughout his career.

“It felt like another game for me,” said McDaniel about having Shanahan on the other side, although the ex-49ers assistant coach appreciated shaking hands with him before and after the game. “To see a lot of people that you invest blood, sweat and tears with and to see a lot of people that are a huge part of your journey, that you otherwise don’t know where you’d be without them, that’s a cool part of the NFL.”

Miami (8-4) had its five-game winning streak snapped and gets through Week 13 second in the AFC East, after a win by the Buffalo Bills over the New England Patriots on Thursday night and Sunday’s New York Jets loss to the Minnesota Vikings. The Dolphins sit at sixth in the AFC playoff picture after Sunday.

“This is nothing for us to worry about, but it is an opportunity to get better from,” Tagovailoa said after the game.

Tagovailoa was 18 of 33 for 295 yards, two touchdowns, two interceptions and a fumble lost late that resulted in a San Francisco touchdown. He went through the game against the 49ers’ top-ranked defense and star pass rusher Nick Bosa, who had three sacks Sunday, without either starting tackle as Brandon Shell played right tackle and Greg Little left for the injured Terron Armstead and Austin Jackson.

“Definitely was a poor performance on my part,” Tagovailoa said. “It sucks that we didn’t come out and do what we wanted to do. … It starts with me, offensively. Turnovers, third downs, communication errors.”

Purdy, who was Mr. Irrelevant as the last pick in the past draft, finished 25 of 37 for 210 yards, two touchdowns and an interception after entering for Garoppolo and his foot injury that will cost him the season.

“He did a tremendous job. Being a rookie, it’s hard in this league to do what he’s asked to do,” Tagovailoa said of Purdy. “Just the poise that he had, doing what was asked of him with action fakes, with his drop-back game.”

The Dolphins, trailing 23-17, had a chance at taking a lead late, but a fourth-down catch called on the field for tight end Mike Gesicki was overturned, giving the ball back to the 49ers before they began putting the game out of reach.

“All the angles that I saw, it looked like a completion,” Gesicki said. “I don’t know. I mean, who knows these days? Catch or no catch, whatever it is, but I thought it was a catch — and especially when you call it on the field.”

The 49ers added a field goal to make it a two-possession game with 3:57 remaining.

Bosa got his third sack as Miami made a final attempt to come back, forcing a Tagovailoa fumble that linebacker Dre Greenlaw returned for a touchdown.

Down 23-10, Tagovailoa got the Dolphins back within one possession with a 45-yard touchdown pass to a wide-open Tyreek Hill deep over the middle in the fourth quarter. 49ers safety Talanoa Hufanga bit on intermediate crossing route, leaving the deep center of the field open for Hill, who finished with 146 yards.

Purdy led an impressive two-minute drill right before halftime to give the 49ers a 17-10 lead at the half. The 11-play, 76-yard drive that took 2:44 was capped by a 3-yard touchdown pass to Christian McCaffrey. Earlier in the possession, Purdy had passes of 19 yards to tight end George Kittle and wide receiver Jauan Jennings and an 18-yard gain to McCaffrey.

Tagovailoa was getting a drive going into San Francisco territory on Miami’s first series of the second half, but his interception-less streak ended at 193 passes after 49ers cornerback Jimmie Ward made a diving pick on a pass intended for Jeff Wilson Jr. as Tagovailoa was hit by Arik Armstead.

The Dolphins were driving after a chunk play where Tagovailoa evaded pressure, found Hill for a 19-yard gain and then had a 15-yard roughing the passer added to the play when Bosa hit him low and possibly late.

San Francisco added a field goal off the first Tagovailoa turnover. Purdy extended the drive with a second effort on a fourth-and-1 quarterback sneak.

The 49ers quickly intercepted Tagovailoa again on his very next pass. Tagovailoa threw behind Hill, who tipped the ball up in the air reaching for it, making for an easy interception by Deommodore Lenoir. San Francisco, on the short field, added another Robbie Gould field goal to build a 13-point lead before Hill’s touchdown.

The Dolphins started Sunday with a swift strike on the first play from scrimmage. Tagovailoa connected on a quick pass to Trent Sherfield up a seam, and the former 49ers receiver raced across the field and up the left sideline for the 75-yard touchdown.

The lead erased later in the first quarter. The 49ers had Purdy connect with wide-open fullback Kyle Jusczyk for a 3-yard touchdown to go up 10-7. That score followed Garoppolo’s opening series that resulted in a field goal after the third-down sack between Jaelan Phillips and Jerome Baker.

Cornerback Xavien Howard secured a first-half interception, his first of the season, but it came on a fourth-down play and actually lost the Dolphins 21 yards of field position. Miami did not get points off the turnover.

Melvin Ingram had a sack for the Miami defense, and Zach Sieler and Andrew Van Ginkel split another.

The 49ers forced a fourth turnover when linebacker Fred Warner intercepted backup quarterback Skylar Thompson in the final seconds. Tagovailoa, who has been treating an ankle injury, left after the final hit from Bosa but said he was “as good as I can be after a game.”

The Dolphins will remain in California for the upcoming week of practice ahead of next Sunday’s prime-time meeting with the Los Angeles Chargers at SoFi Stadium.